Apple will have a detail at the announcement. The A16 Bionic chip of the iPhone 14 Pro series integrates 16 billion transistors, which is just close to the number of M1 transistors two years ago. Two years later, Apple’s A-series chips for the mobile terminal have quietly touched the edge of the M chips, which is not a small improvement, especially since both are based on the ARM architecture and have similar cores.

Even so, the performance of the A16 Bionic is not so “remarkable”, and the energy consumption is more like the credit of the 4nm process, the number of transistors, and the “progress” in the non-traditional sense. Apple’s A-series chips have slowed down in the past three years, and doubling up has become a thing of the past.

Compared with the past, Apple’s A-series chips were only limited to iPhone and iPad mobile devices. Now A-chips are blooming everywhere. Last year, they were even distributed to Studio Display monitors, causing a lot of speculation. Starting with the iPhone 13 series last year, Apple also broke the tradition of using the same chip for the new iPhone and used different A15s (one less GPU core) for non-Pro and Pro.

When it comes to this year’s iPhone 14 series, Apple has taken a step forward and violated the ancestral training of equipping new iPhones with new chips. Only the Pro series is equipped with A16, and the non-Pro series is last year’s A15 chip. From two chips of the same generation of iPhone to two generations of chips, there are of course commercial considerations and product strategy changes.

One generation of iPhone, two generations of chips, the problem is not performance

Starting from the A4 chip, Apple has dominated the design of the A-series chips, and has also started the iterative calculation rule of doubling from generation to generation. Apple will always come up with good ideas to promote the development of the industry, and the energy efficiency improvement of the A-chip behind it is the basic guarantee.

A-series chips are not upgraded step-by-step like their counterparts, but are ahead of schedule. The A7 uses the 64bit ARMv8 architecture, and the iPhone 5s became the first smartphone with a 64-bit processor. The brilliant M chip is also considered to be standing on the “shoulders of giants” of the rich design experience of A series chips. It can be said that A-series chips run through the history of Apple’s self-made chips. The latest A16 Bionic CPU still uses 2 large cores and 6 small cores.

However, the large and small cores have been upgraded to Everest (Mount Everest) and Sawtooth (Sawtooth Mountain). Compared with A15’s Avalanche large core and Blizzard small core, the obvious change is the increase in clock. This is also Apple’s consistent upgrade strategy since the third generation of chips from A14 to A16. 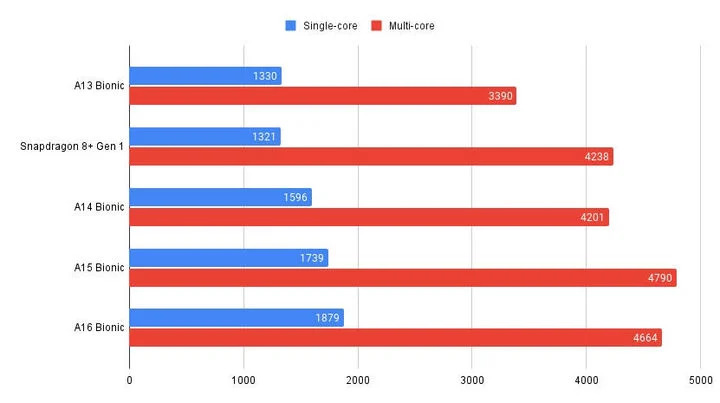 Another notable change is the move from A15’s 5nm process to TSMC’s 4nm process. TSMC disclosed that N4P will have 11% performance improvement and 22% reduction in energy consumption compared to N5, but the iPhone 14 Pro series running scores have not improved significantly. Taking GeekBench 5 as a reference, A16 single-core increased by 8% and multi-core increased by 9%. Lower than when A14 rose to A15. Although it is not rigorous, it is enough to show that the increase from A15 to A16 is not large. The leading process is reflected in energy efficiency. Therefore, the battery capacity of the iPhone 14 Pro and Pro Max is reduced, but the official battery life figure has increased by 1 hour.

This is also the obvious performance difference between the two generations of processors when evaluating the iPhone 14 and iPhone 14 Pro. On the contrary, under iOS 16, aside from simple running points, games, Internet access, and photography are not much different. Behind the different processors, the iPhone 14’s memory has been upgraded to 6GB, but it is a “feeling” upgrade, and the background App running ability is the same as the Pro series. However, traditionally, iOS upgrades and system maintenance are also divided according to the chip. For example, the iPhone 8 can be upgraded to iOS 16, but the iPhone 7 chip is too old to be blocked.

Perhaps the exclusion of the iPhone 14 due to the A15 chip problem in a certain version of iOS or major functions in the future is the most important issue for one generation of iPhone and two generations of chips.

This year’s iPhone 14 goes a step further, with different processor generations, Promotion screen, AOD lock display, dynamic island interaction, imaging system, etc. Pro and non-Pro not only have differences in performance and functions, but also increase the visual difference between different screens. In addition to the different performance of different chips, A16 supports (carries) LPDDR5, has higher operating frequency and bandwidth, and has better operating efficiency than LPDDR4X.

The difference in CPU performance is only the difference between each generation of chips. Modules such as memory, GPU and neural engine are upgraded, and the quality also changes. The iPhone 14 Pro series has a new 48-megapixel main lens, equipped with a new four-in-one algorithm, and a high-pixel ProRAW file, which greatly increases the image limit of the Pro series.

Even if Apple adjusted its basic product line this year, cut off the mini series and replaced it with the large-screen 14 Plus, from the product point of view, this year’s basic model and the Pro series are the most different, as if the old iPhone ended and the new iPhone began.

Looking through Apple’s official website products, in addition to AirPods and Apple Watch (also Apple’s self-developed chips), from Apple TV to iPhone, iPad, and even Studio Display monitors, A-series chips are everywhere. These products cover the A12~A16 five-generation A-series chips, and the first three A15 chips are also present in the iPad mini 6, iPhone SE3, and iPhone 13 and 14 series.

It is rumored that the next-generation Apple TV will also upgrade the built-in A12 chip to A14, skipping A13. Interestingly, I guessed that the A13 chip of Studio Display was not the same as the iPhone. It was said to be a poor version of the bining test. It was originally to be abandoned or scrapped. It is zero cost recycling.

Advanced Process In recent years, Apple’s A-series chips generally do not act as guinea pigs, and choose a more stable and mature old process. One is due to the high yield rate, and the other is the lack of competitiveness of “competitors” chips of the same level. Four years ago, Apple designed the A12X chip for the iPad Pro 2018, which is completely different from the A12 architecture. It is almost a new SoC and can also be regarded as the predecessor of the M chip.

See also  In the 6.5 million round of TherapyChat also invests Mediaset

Every two years, the same iPad Pro, the SoC was upgraded to A12Z, which is only one GPU core away from A12X. 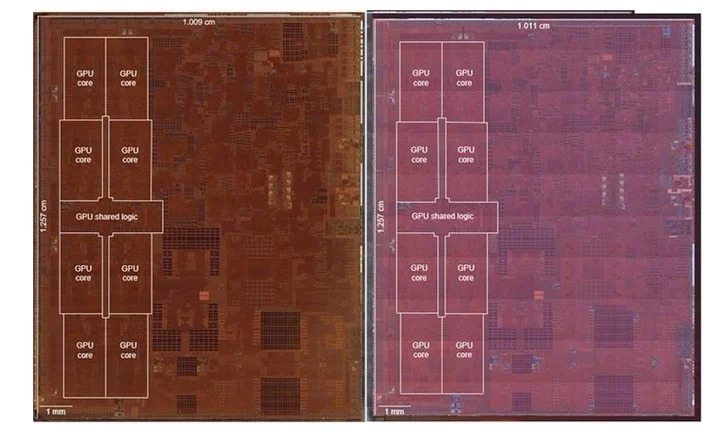 ▲ The left is A12Z, the right is A12X, the two modules are arranged exactly the same. (Source: TechInsights)

According to TechInsights X-ray analysis, the A12X and A12Z die are almost the same, and the functional modules are also the same. To put it bluntly, it is to re-enable one of the GPUs of the A12X mask. The reason is also that TSMC’s 7nm process is mature, with higher wafer yield and better quality.

Regardless of whether Qualcomm or Samsung SoCs have performed unsatisfactorily in recent years, the new process and new architecture chips have been “overturned” one after another, making the A-series chips the leader. Even with the 5nm A15 last year, it still has top performance in energy efficiency, even throwing off a few horses from its competitors. Apple’s old chips are still very competitive, and with the increase in yield, the cost of chips has gradually decreased. The old chips are spread across various product lines, which is also a mature business method to continuously reduce costs.

Just as Intel divides chips of different constitutions into i9, i7, i5, and i3, Apple’s A-series chips also follow to make full use of and squeeze out profits. However, Apple’s A-series chips are not divided by the same generation, but the positioning of each generation of chips is different. For the contemporary A series of the high-end flagship series, the old chips are distributed to the basic iPhone, iPad, and even lower-end products such as Apple TV and Studio Display.

(This article is reproduced with permission from Ai Faner; source of the first image: Apple)

are they safe for health? What you need to know