Earthquakes hundreds of kilometers deep are called “deep earthquakes” and occasionally cause severe disasters, such as the 1994 Bolivia earthquake with a focal depth of 638 kilometers and a magnitude of 8.3.

The cause of deep earthquakes is still a mystery, as earthquakes occur with rapid fault slippage, but are difficult to detect under the enormous pressure deep in the mantle. And technical limitations prevent scientists from simulating the depth of the mantle in the laboratory to understand the mechanism of deep earthquakes.

For the first time, a research team has used state-of-the-art large-volume deformation instruments, combined with simultaneous X-ray observations, to perform strain experiments with natural olivine, the main mineral in the mantle and subduction zone. Under the condition of deep mantle, X-ray imaging was used to observe the occurrence of major fractures in the sample, and the “earthquake” phenomenon was observed by transmitting ultrasonic waves.

▲ The left is the experimental sample, and the red dotted line indicates the fault. The middle shows the fault filled with nanocrystalline olivine and beta-olivine (Wadsleyite). The right is a close-up of the fault fissure, and the green part is the partial melting product of iron-rich olivine, distributed along the grain boundaries of nanocrystalline olivine. (Source: Nature). 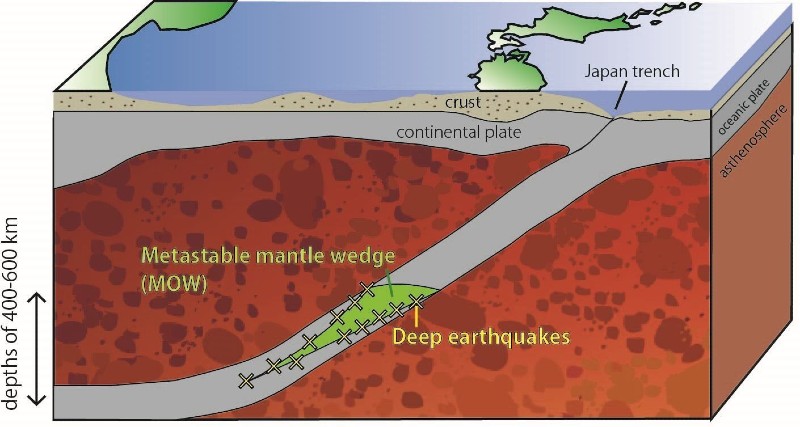 ▲ The hypocenters of deep earthquakes are preferentially distributed around the surface of the unstable olivine wedge in the center of the submerged plate. (Source: Ehime University)

After analyzing the sample, it was found that the fracture was caused by the “new” olivine with tens of nanometers of ultra-fine grains grown after the “old” olivine phase transformation (phase transformation), and the grains after the phase transformation can be faults. Fast-glide lubricant. The sample melted locally along the fault due to extremely high temperatures caused by rapid slip. The model is based on laboratory experiments and accounts for the distribution of deep earthquakes, where unstable “old” olivine is expected to form ultrafine-grained “new” olivine as depth increases from about 400 kilometers to 600 kilometers. The paper was published in Nature Communications.

(This article is reproduced with permission from the Taipei Planetarium; source of the first image: Flickr/James St. John CC BY 2.0)

“The 3 babies are coming”, Charlene of Monaco: the revealing PHOTO

Mi Yuting: Satisfied with his performance in Tianyuan War, he will continue to play in the Weijia and World Championships – yqqlm