Home Technology Through the infrared camera of the Webb telescope, the “cloud” of Titan was found | TechNews Technology New Report
Technology

Through the infrared camera of the Webb telescope, the “cloud” of Titan was found | TechNews Technology New Report

Titan is the largest satellite of Saturn and the second largest satellite in the solar system, and its appearance is miraculously very similar to that of the earth. Recently, astronomers have also observed it from different angles through the Webb Telescope’s Near Infrared Camera (NIRCam) The clouds of the satellite.

Judging from the photos taken by the Webb Space Telescope (JWST), Titan looks like the twin of the earth, with rivers, lakes, oceans, and atmosphere. Sagittarius is completely different from Earth.

Titan’s world is rich in carbon and poor in oxygen. The surface liquid is composed of hydrocarbons including methane and ethane. The atmosphere is full of thick smog, and the visible light reflected from the surface cannot be seen. But the Titan team spotted what looked like two clouds while examining images captured by the Webb Space Telescope on Nov. By comparison, it has been confirmed that the bright spots visible in Titan’s northern hemisphere are clouds. 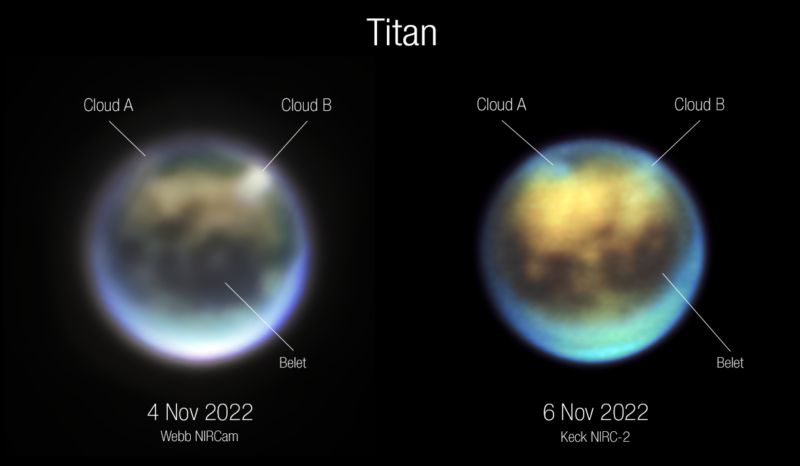 The infrared spectroscopy of the Webb Space Telescope can more accurately measure the height of clouds and haze. The finding validates what computer models have long predicted about Titan’s climate, which says cloud formation is more likely in the central northern hemisphere when it heats up in late summer. It also points to directions for new research, with the researchers saying that one of the future priorities will be to figure out whether these clouds move or just change shape so that seasonal air patterns on satellites can be confirmed.

This will not only help astronomers better understand Titan’s atmosphere, but even get a glimpse of why the fascinating rivers, lakes and landforms on Titan are formed, and ultimately understand whether there is life on Titan.

Covid, the symptoms of the new Cerberus and Gryphon variants, spread between October and November