Google has been rumored to launch a folding screen mobile phone for a long time, but the recent news is more and more eye-catching. In addition to the software clues and possible appearance brought by whistleblowers, now Google is rumored to be a folding mobile phone. The device also appeared in the database of the benchmark software.

In the Geekbench database, a product called Google Felix appeared. According to previous information, Felix is ​​the development code of the Pixel folding machine. The processor of this product uses two 2.85GHz large cores, with two 2.35GHz cores and 1.8 GHz small core, and the background data shows that the matching GPU is Mali-G710, no surprise it is Tensor G2. 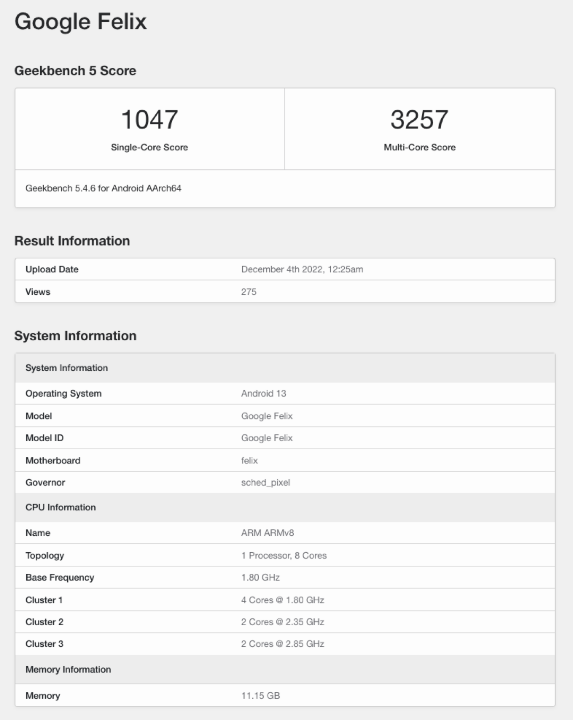 The Geekbench database shows that the single-core performance score of this product is 1,047 points, which is similar to that of the Pixel 7 series. However, the multi-core score of 3,257 points has grown a lot compared to the Pixel 7 series’ score of about 2,800 points. It is a strange place, isn’t it? Is it because the larger area of ​​the folding machine helps dissipate heat, and this result is the normal performance of the Tensor G2? Of course, it is also possible that this result is not correct.

In addition to the Tensor G2 processor, previous intelligence indicated that the Google Pixel foldable phone will use a 7.58-inch LTPO AMOLED internal screen, support a 120Hz refresh rate and a maximum brightness of 1,200nit, and the camera will use a 64MP Sony IMX787 main camera with a S5K3J1 telephoto And the IMX386 super wide-angle, the estimated price will be set at 1,799 US dollars, and it may be released simultaneously with the Pixel tablet in May next year.

the center at risk of eviction. On December 12 possible seals in swimming pools and gym

The player successfully removed the “Nintendo Soul” from...