Strong wind and rain in the Xisha Islands, moderate to heavy rain in Sichuan, Tibet and other places: From 08:00 yesterday to 06:00 today, under the influence of typhoon “Aolu”, heavy to heavy rains and local heavy rains (125 mm) occurred in the Xisha Islands; Level 9 gusts, level 10-11 locally in the Paracel Islands. In addition, moderate rain and local heavy rain occurred in parts of eastern Tibet, southern Qinghai, southern Gansu, southwestern Shaanxi, northern and eastern Sichuan, western Chongqing, and western Yunnan.

This year’s No. 16 typhoon “Olu” has intensified into a super typhoon again at 2:00 am today (27th) in the middle of the South China Sea. At 6:00 am, its center is located in Sansha City, Hainan Province (Yongxing Island in Xisha) On the sea surface about 145 kilometers east-south, it is 15.6 degrees north latitude and 112.7 degrees east longitude. The maximum wind force near the center is 16 (55 m/s), the minimum pressure in the center is 930 hPa, and the radius of the seventh-level wind circle is 200-280 km, the tenth-level wind circle has a radius of 100 kilometers, and the twelve-level wind circle has a radius of 50 kilometers. It is expected that “Olu” will move westward at a speed of about 20 kilometers per hour, and its intensity will also increase. After passing through the southern waters of the Paracel Islands, it will land on the central coast of Vietnam on the morning of the 28th (50-55 m/s, level 15-16, strong typhoon level or super typhoon level), and the intensity gradually weakened after landing (see Figure 1). The Central Meteorological Observatory continued to issue a yellow typhoon warning at 06:00 on September 27。

Affected by “Aolu”, from 08:00 on the 27th to 08:00 on the 28th, the western Taiwan Strait, most of the South China Sea, the Xisha Islands, the Zhongsha Islands and the Nansha Islands, the Qiongzhou Strait, and the coastal areas of central and southern Fujian, Guangdong, and Hainan Island. There will be strong winds of magnitude 6-8 and gusts of magnitude 9-10. The winds in the west-central South China Sea and the waters near the Paracel Islands can reach magnitudes 9-12 and gusts of magnitude 13-14. Nearby sea areas or areas where the center of “Aolu” passes The wind force is 13-17, and the gust is above 17; there will be heavy to heavy rains along the south-eastern coast of Guangxi, most of Hainan Island, the Xisha Islands, and the Zhongsha Islands, of which there will be heavy rains (100-180 mm) in the eastern part of Hainan Island and the Xisha Islands. , There are local torrential rains (250-300 mm) in the waters near the Paracel Islands.

In addition, the center of this year’s No. 17 typhoon “Rose” (strong tropical storm level) was located on the northwestern Pacific Ocean, about 910 kilometers east-southeast of Tokyo, Japan at 5 o’clock this morning. It is expected that “Rose” will have no impact on my country’s waters in the future. .

（2）The rain in the southwest gradually weakened

From the 27th to the 28th, the range of overcast and rainy areas in the southwest has been reduced and the intensity has weakened. There are still light to moderate rains and local heavy rains in parts of Sichuan, Chongqing, the Qinghai-Tibet Plateau and other places; there are sleet or snow in high-altitude areas.

See also  Iraq says the attack on the prime minister’s residence was a “terrorist attack”, US and British leaders condemned

In addition, from the 27th to the 28th, there was light rain in the northern part of Xinjiang, the temperature dropped by 4 to 6 degrees Celsius, accompanied by northerly winds of magnitude 4 to 6, and there was snow or sleet in high altitude areas.

（1）Strong precipitation in Indochina Peninsula, southern Europe and other places

In the next three days, there will be moderate to heavy rains in parts of the Indochina Peninsula, the Japanese islands, southern northern Europe, central southern Europe, the western coast of Canada, the southeastern coast of the United States, southern West Africa, northern Central Africa, Cuba Island, southern Brazil, Bolivia, and western Argentina. , local heavy rain to heavy rain, and some places are accompanied by strong convective weather such as thunderstorms and strong winds. There will be sleet or moderate to heavy snow in central Russia, Alaska, northern Canada, central and southern Chile, and southern Argentina.

In the next three days, there will be high temperatures above 35°C in parts of West Asia, southern Central Asia, the Indus Plain, the southwestern United States, northern Mexico, northern Australia, the Sahara and its northern regions, and northern and eastern Brazil. up to 38~40℃.

From 08:00 on September 27th to 08:00 on the 28th,There are moderate to heavy rains in parts of northern Xinjiang, Ili River Valley, eastern Tibet, western and southern and northeastern Sichuan, central Chongqing, southern and western Guangxi, and Hainan Island. There are local torrential rains, and heavy rains (100-180 mm) in the eastern and southern parts of Hainan Island. There are winds of magnitude 4 to 6 in parts of northern Xinjiang and other places (see Figure 2). There are winds of magnitude 11 to 12 and gusts of magnitude 13 and above in the South China Sea. 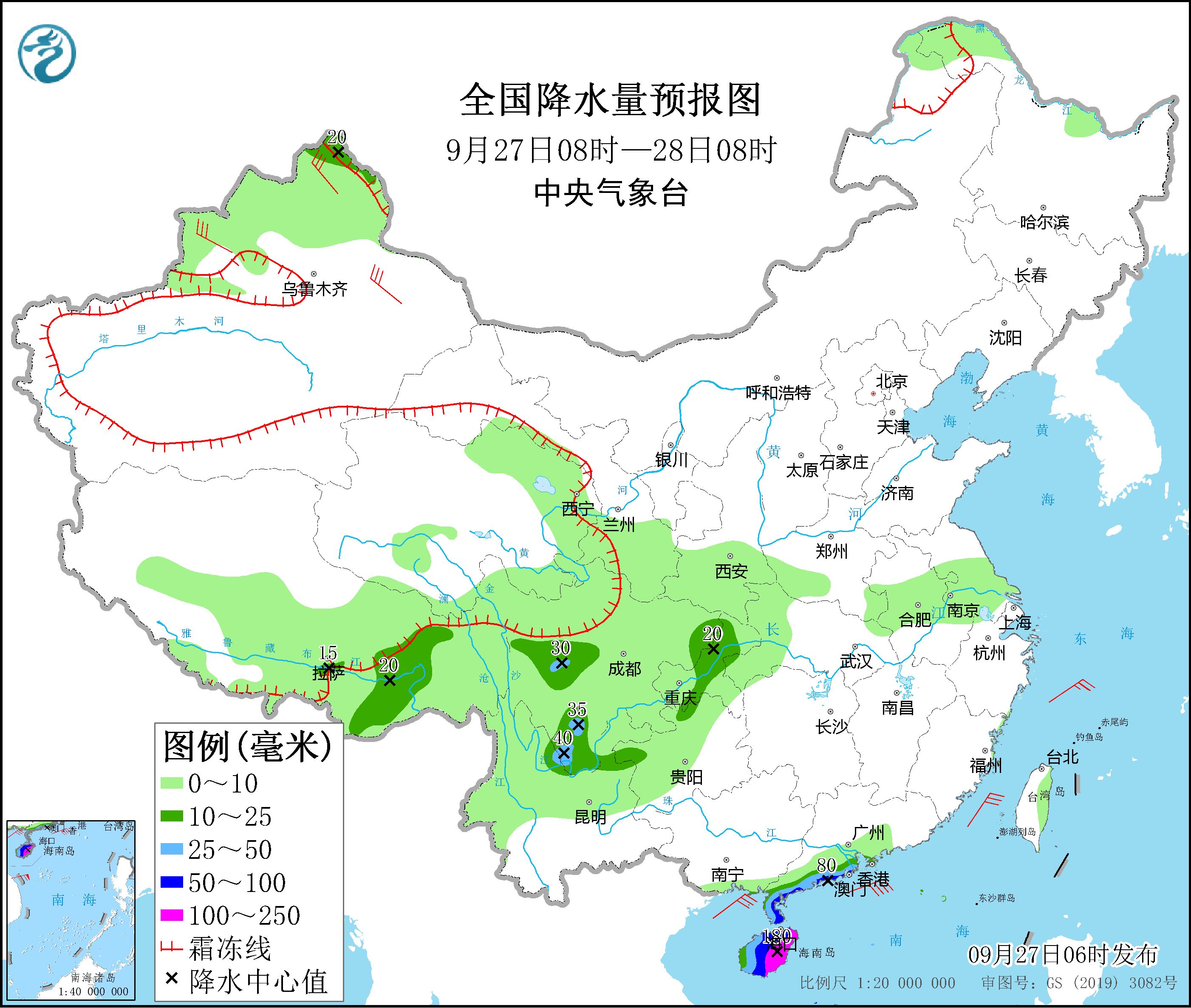 From 08:00 on September 28th to 08:00 on the 29th,There are moderate to heavy rains in parts of northern Xinjiang, southeastern Tibet, southwestern Sichuan, northern Yunnan, southern China, and Hainan Island. Among them, there are parts of the southern coast of Guangxi, the southeastern coast of Guangxi, and the northeastern and southern parts of Hainan Island. Heavy rain or heavy rain (100-130 mm). There are winds of magnitude 11 to 12 and gusts of magnitude 13 and above in the South China Sea. There are 4-5 winds in parts of northern Xinjiang and northeastern Inner Mongolia (see Figure 3). 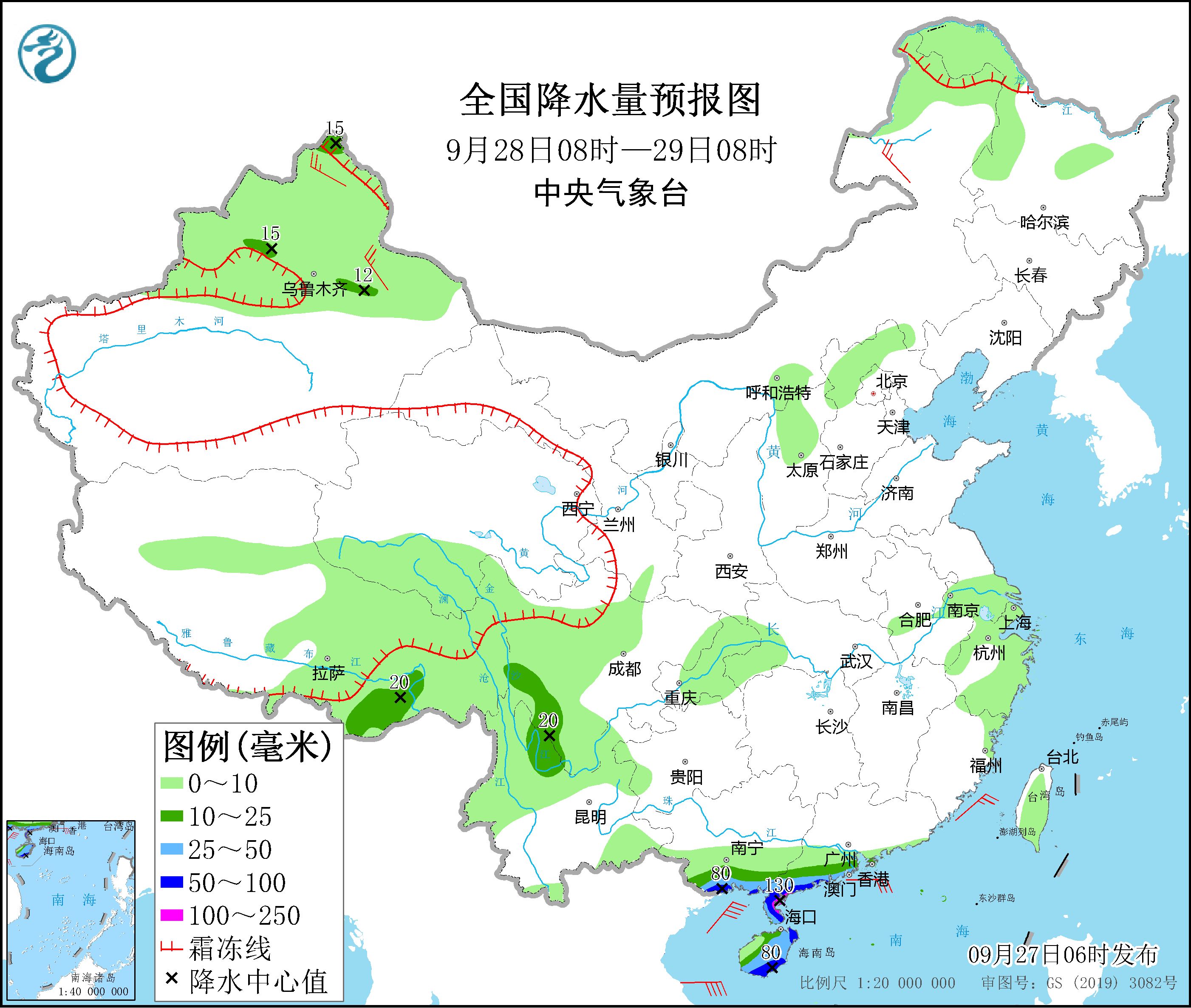 From 08:00 on September 29 to 08:00 on September 30,There were moderate to heavy rains in parts of northern and eastern Xinjiang, southern South China, and the Sichuan Basin. Among them, there were local torrential rains (50-60 mm) along the southwestern coast of Guangxi. There are 4-5 winds in parts of central and western Inner Mongolia, western Heilongjiang, northern and eastern Xinjiang (see Figure 4). 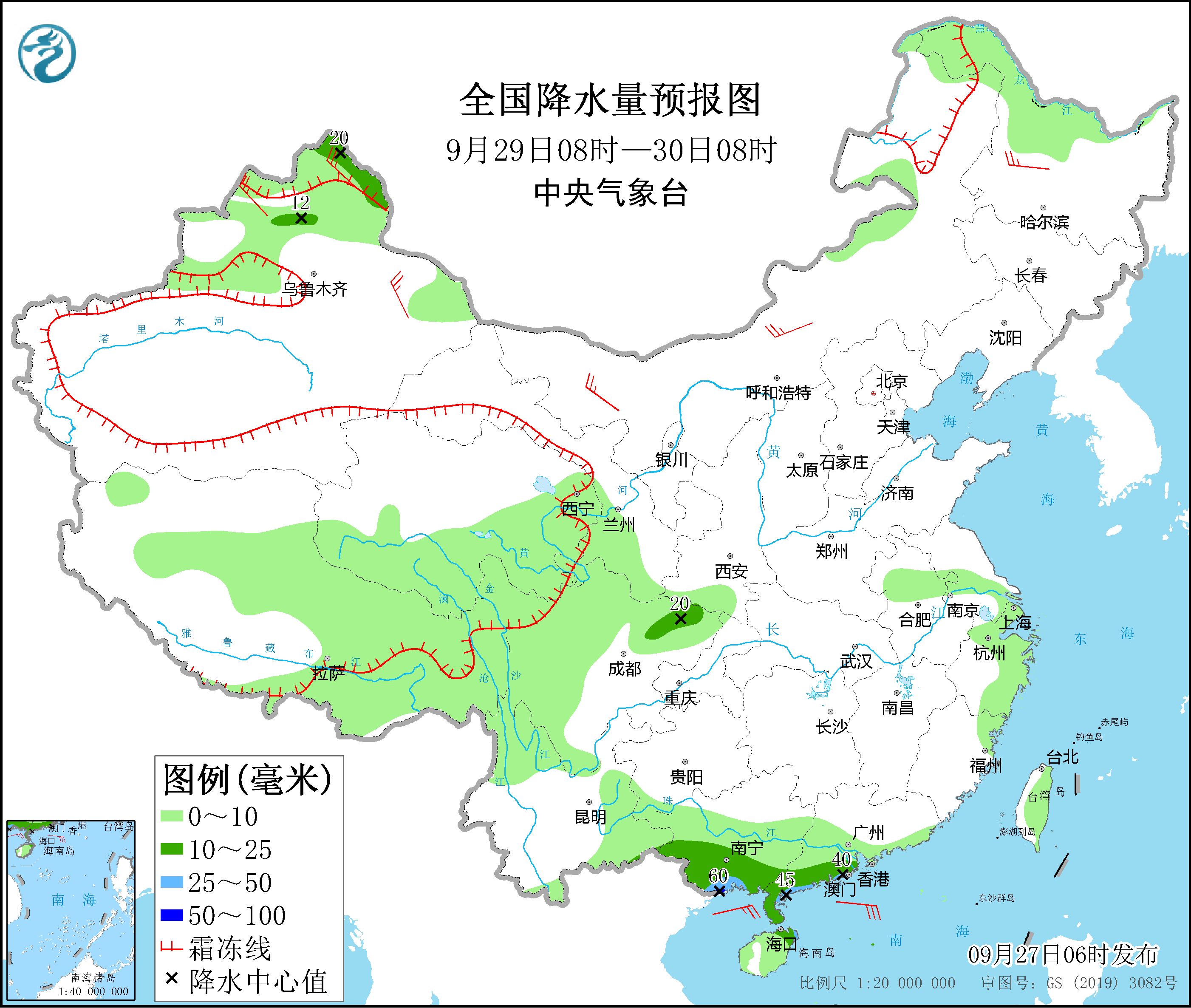 1. The impact of typhoon “Aolu” on the South China Sea, Sansha Islands, Hainan Island and other places;

2. Secondary disasters that may be caused by continuous rainfall in Southwest China and local short-term heavy rainfall and its impact on the Sichuan-Tibet Railway and the Luding earthquake area;

The last words of Putin’s opponents in court...

The persecution of rappers: Tehran silences the protest

Gifts to Fifa, rights and deaths: the obsession...

George Floyd murder, three and a half years...