At 9:20 on March 15th, with the sound of the whistle, the China-Laos Railway (Zhengzhou-Vientiane) international freight train of the China-Europe Railway (Zhengzhou) Assembly Center was loaded with machinery and equipment and other goods. out.Photo by Henan Daily reporter Nie Donghan 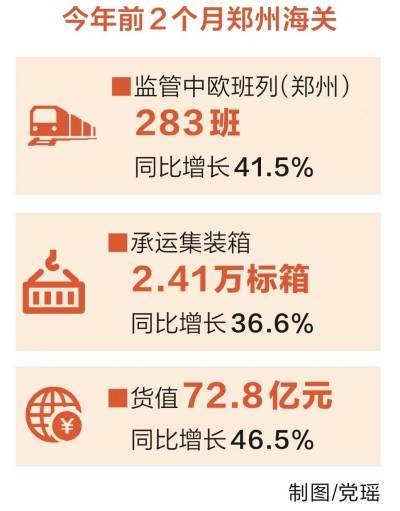 Seize the new opportunities of RCEP and build new advantages of opening up. At 9:20 on March 15th, the whistle sounded, and the China-Laos Railway (Zhengzhou-Vientiane) international freight train from the China-Europe Railway (Zhengzhou) Assembly Center was loaded with machinery and equipment and slowly departed from the Zhengzhou Central Station of China Railway Union.

Different from the previous freight trains, this train is the first China-Laos international freight train in Henan, and it is also the new line of Zhengzhou-Budapest, Hungary and Zhengzhou-Ho Chi Minh City, Vietnam that will be opened in January 2022 at the assembly center of China-Europe Express (Zhengzhou). After that, the third new line successfully opened during the year has added a new efficient, safe, fast and economical international logistics channel for the economic and trade exchanges between the Central Plains and RCEP member countries.

“The opening of a new international freight line from Zhengzhou to Vientiane is a concrete practice for the China-Europe Railway Express (Zhengzhou) Consolidation Center to actively seize the strategic opportunity of RCEP and unblock the domestic and international dual circulation, which will help effectively drive the comprehensive economic and trade cooperation between Henan, Laos and the entire ASEAN region. Contacts and cultural exchanges.” said Li Xiaohu, director of the Administrative Committee of Zhengzhou Economic and Technological Development Zone.

According to reports, Zhengzhou Economic and Technological Development Zone is the main unit for the construction of the China-Europe Railway (Zhengzhou) assembly center. This train is organized by Zhengzhou Zhongyuan New Silk Road International Multimodal Transport Co., Ltd. The train runs along the China-Laos Railway and exits through the Mohan Port in Yunnan. , It is expected to arrive in Vientiane, the capital of Laos, in about 6 days.

“The full load of goods on this train is all machinery and equipment produced by local enterprises in Henan, with a total of 26 TEUs, which can save more than half of the transportation time compared with shipping.” Li Yabing, chairman of Zhengzhou Zhongyuan New Silk Road International Multimodal Transport Co., Ltd., introduced, With the support of Zhengzhou Customs, China Railway Zhengzhou Bureau Group, China Railway Lianji and other parties, the company will develop new routes from Zhengzhou to Thailand in an orderly manner on the basis of the normal operation of the Zhengzhou-Vientiane international freight line, and build the Central Plains region and ASEAN. The “golden channel” for in-depth cooperation in the fields of national multimodal transport, trade logistics, industrial cooperation, etc., unblocks the domestic and international dual circulation, and further promotes the energy level of the Zhengzhou hub and the development of the hub economy.

With the opening of the international freight line from Zhengzhou to Vientiane, Zhengzhou has formed an international multimodal logistics network to 15 destinations including Hamburg, Munich, Liege, Moscow and Milan. At the China Railway Union Central Station in Zhengzhou, the “steel camel team” is busy every day. According to statistics, in the first two months of 2022, Zhengzhou Customs supervises 283 China-Europe freight trains (Zhengzhou), carrying 24,100 TEUs of containers with a value of 7.28 billion yuan, an increase of 41.5%, 36.6%, and 46.5% year-on-year respectively. (Henan Daily reporter Wang Yanhui)Return to Sohu, see more

At the G7 summit in Germany, leaders take...

Abortion in the USA: protests and clashes, the...

The edict of the Russian mafia: “We are...

The US reunites Israel and the Arab countries...

Pride in Turkey, dozens of arrests in Istanbul