On October 10th, Iraqi voters participated in the election of the new National Assembly in Baghdad and voted in Xinhua News Agency. 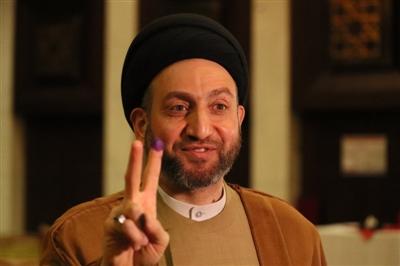 On October 10, Hakim, the leader of the Iraqi “National Wisdom Movement”, showed his fingers dipped in ink after voting in the election of the new National Assembly in Baghdad. Xinhua News Agency issued Xinhua News Agency.

Voting for the election of the new Iraqi National Assembly officially began at 7:00 local time on the 10th.

According to data released by the Independent High Electoral Commission of Iraq, 3,249 candidates from 167 political parties, political entities or independents will run for 329 seats in the new National Assembly. Approximately 24 million registered voters in this election, 8273 voting centers were set up in Iraq.

Voting will continue until 18:00 on the 10th local time. The results of the election are expected to be announced 24 hours after the end of the voting.

For security reasons, the entire country of Iraq closed airports and border crossings during the election period, prohibiting the circulation of people and vehicles across provinces.

Analysts believe that the years of war and the intervention of external forces have led to a large number of political factions in Iraq. It remains to be seen whether the political situation can be stabilized after the election.

The holding of parliamentary elections in advance and the promotion of electoral reforms are the main commitments made by the current Prime Minister Kadimi after he took office in May 2020. In July 2020, Kadimi announced that it would advance the election of the new National Assembly originally scheduled for 2022 to June 2021. In January this year, the Iraqi government announced that it would postpone the election to October 10 for technical reasons.

See also  Indonesia's increasing number of new crowns diagnoses for the first time over 40,000 cases, the president expresses condolences to the deceased of new crowns

The election will be held in accordance with the new National Assembly election law passed in December 2019. The bill allows independent candidates to stand for election for the first time and stipulates that persons with dual citizenship shall not be national leaders or government officials. It also divides the 18 provinces of Iraq into 83 electoral districts, each of which was previously an independent electoral district.

Iraqi political analyst Nusayba Younis pointed out that in theory, dividing more electoral districts means that parliamentarians can better represent the opinions of voters, but in fact, small parties and independent candidates are in a weak position and it is difficult to compete with major political factions. The election as a whole still continued the electoral system established after the 2003 Iraq War, and did not abolish the quota system as requested by the people in the large-scale demonstrations in 2019.

In 2003, the United States invaded Iraq and destroyed the original political ecology of Iraq. Since then, under the leadership of the United States, Iraq has established a political system based on a quota system, which distributes the positions of the president, prime minister, parliament, and cabinet in a certain proportion to Shiites, Sunnis, Kurds and other minorities. Opponents criticized this model for causing political power to be controlled by some political parties for a long time, and it is easy to breed corruption and other problems. They called for reforms.

Religious and ethnic issues in Iraq are more complicated. In addition to the Shiites, which have a majority of the population, there are also many Sunni residents, as well as Kurds in the north and other ethnic groups. Coupled with the long-term war in the country, and the deep involvement of foreign forces, these factors have superimposed, resulting in a situation of political factions in Iraq.

See also  The first 4 space tourists of SpaceX have successfully returned, the landing of their spacecraft yesterday in the Atlantic

The religious power represented by the Shi’ite religious leader Muktada Sadr and the Shi’ite political group “Fatah Alliance”, which has close ties with Iran, are still the two main forces in this election. In the 2018 elections, the “Walkers Alliance” led by Sadr and the “Fatah Alliance” led by Hadi Amir became the two major factions with the most votes, occupying 54 and 48 seats in the parliament respectively.

Anti-American sentiment in Iraq is currently on the rise. The “Sadr movement” led by Sadr in this election held an anti-American and anti-Iranian nationalist stance, supported by a large number of poor Shiite people. The “Fatah Alliance” is also anti-American, but it has close ties with Iran. It has promoted the adoption of a resolution requiring the withdrawal of U.S. troops from Iraq in the parliament, and put forward the slogan “We protect and build Iraq” in this election.

In addition to these two main forces, some current and former Iraqi leaders have also actively formed coalitions of political parties to participate in the election. Former Prime Minister Abadi and former Chairman of the Supreme Islamic Council of Iraq Hakim jointly formed the Alliance of National Powers. The “Progressive Alliance”, a Sunni political group led by the Speaker of the National Assembly, Muhammad Habhi, will also run for the election. The two major political parties in the Kurdistan Autonomous Region of Iraq-the Kurdistan Democratic Party and the Kurdistan Patriotic Union have absolute dominance in the autonomous region.

Analysts pointed out that there are huge differences among the main factions in Iraq, and complex games may be launched in the process of forming a cabinet after the election. In the future, if the new government wants to promote reforms, it will inevitably face domestic political contradictions and interference from external forces, so it will be difficult.

From the domestic situation, the security situation in Iraq has been unstable since the beginning of this year, the number of attacks has increased significantly, the government’s public service capacity is still weak, and problems such as high unemployment and corruption are difficult to solve. In the face of the new crown epidemic, the government’s ability to respond is limited. This year there have also been two fire accidents in designated hospitals for the new crown.

From the perspective of external factors, the game between the United States and Iran in Iraq has intensified in recent years. In early 2020, the U.S. military assassinated Soleimani, the commander of the “Quds Brigade” under the Islamic Revolutionary Guard of Iran, and Muhandis, the deputy commander of the “People’s Mobilization Organization” of the Iraqi Shiite militia, in Iraq. Iran has since retaliated. The US troops stationed in Iraq were attacked with ballistic missiles. Although the Biden administration of the United States has announced that the US military in Iraq will end its combat missions before the end of this year, this does not mean a complete withdrawal. Therefore, the game between the United States and Iran will continue, and this will inevitably have an impact on the situation in Iraq.

The special representative of the United Nations Secretary-General for Iraq and the head of the United Nations Assistance Mission in Iraq, Yanina Henness-Prashart, said that the top priority is to ensure that the elections to the Iraqi National Assembly are held in a fair and transparent manner. This election may bring about change in Iraq, but no election will immediately create miracles. The important thing is to quickly and effectively form a government and promote reforms after the election to meet the various challenges facing Iraq.According to Xinhua News Agency

Beach Volley, in Cagliari the last match together for Nicolai and Lupo