Home World Changsha’s trade with Africa welcomes a “blowout”, and the import and export volume in the first three quarters exceeds that of last year-Sanxiang Vientiane-Hunan Online
World

Changsha’s trade with Africa welcomes a “blowout”, and the import and export volume in the first three quarters exceeds that of last year-Sanxiang Vientiane-Hunan Online

The import and export volume in the first three quarters exceeded that of last year, accounting for nearly half of the province, an increase of 91.12% 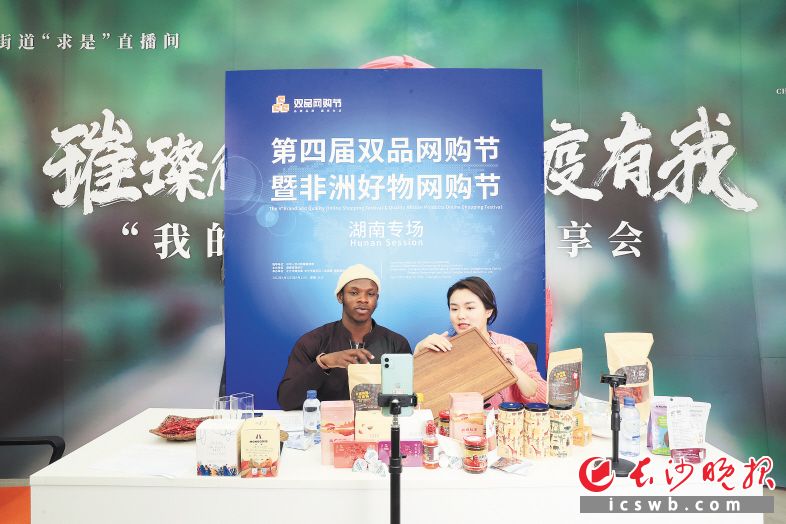 African coffee is fragrant on the streets of Changsha, and Changsha Construction Machinery has written a “Chinese legend” on the African land… The inland city of Changsha is not along the border or the sea, but it has increasingly close economic and trade exchanges with Africa.

According to customs statistics, in the first three quarters of this year, Changsha’s import and export volume to Africa was 19.117 billion yuan, which has exceeded the 14.27 billion yuan of last year. The city’s foreign trade increased by 67 percentage points, which was 44 percentage points higher than that of the province’s trade with Africa.

The African non-resource product distribution and trading center located in the Gaoqiao market has formed 10 import and export industrial chains such as coffee and cashew nuts. Among them, the import volume of African specialty coffee has reached 1,000 tons, and it is expected that the specialty coffee will reach more than 2,000 tons in 2023.

The introduction project has strong stamina for cooperation with Africa

Today’s projects are tomorrow’s industries. Cooperation projects with Africa have been launched one after another, and Changsha’s trade with Africa is full of stamina.

In June, Longping Agricultural Development Co., Ltd. took the lead in signing a letter of intent for “China-Tanzania Contract Agriculture” cooperation with the Ministry of Agriculture of Tanzania, and planned to jointly develop 100,000 hectares of corn/soybean planting with Tanzanian local governments and Tanzania partners. It is expected to be 3 to 5 During the year, it will achieve a stable supply of 300,000 tons of soybean grains per year for the country, and build the largest seed production, processing and trading center in East Africa.

Longping’s “long-sleeved dance” in the international seed industry competition stage is the epitome of Changsha’s active promotion of projects and investments in Africa.

See also  Stopovers and refugee camps, the routes of salvation end up against walls

Changsha’s cooperation in the whole agricultural industry chain with Africa, cross-border e-commerce with Africa, and construction machinery business with Africa are flourishing.

At the beginning of the year, the Southern Headquarters Project of Chaoliang Group and the 360 ​​China-Africa Economic and Trade Digital Intelligence Valley, two major economic and trade investment promotion projects for Africa, were successfully signed.

From January to September this year, Changsha added 3 registered overseas investment projects in Africa, including Hunan Jinshiyuan’s merger and acquisition of Lulu Mining Co., Ltd. in Congo (Brazzaville), and the newly added Chinese contract investment amounted to 12.2 million US dollars. The construction of contracted engineering projects such as the Uganda Karuma Hydropower Station Project of the Eighth Hydropower Bureau and the CBD Project of the New Administrative Capital of Egypt of the China Construction Fifth Bureau has been accelerated.

The good news is that the projects signed for the second China-Africa Economic and Trade Expo have yielded fruitful results.

At present, the Yuanshi Fudao Angola Hybrid Rice Comprehensive Development Industrial Park project has a variety test area of ​​1,750 square meters and 3,600 mu of hybrid rice. The harvest has been completed, and the output is about 8.18 tons / hectare; the leading international trade project of African rubber international trade has completed 400 million yuan Re-export rubber procurement of RMB yuan; Hunan Denuo Group’s rosemary leaf raw material procurement project contract has been implemented, with a turnover of 6 million US dollars…

2,213.2 tons of cargo shipped on the extension channel freight route

On July 27, the first flight loaded 95 tons of high value-added goods such as e-commerce products, pharmaceutical products, high-tech products, integrated circuits, and flew directly from Changsha to Addis Ababa, the capital of Ethiopia. This is the first freight route opened by Hunan to Africa after the opening of the first “Changsha-Nairobi” passenger route directly to Africa in 2019, and a new air bridge has been built between Hunan and Africa. The “Changsha-Addis Ababa” cargo route has two flights a week, with an estimated annual cargo capacity of 17,000 tons. The opening of the route is a vivid practice of building a China-Africa community with a shared future in the new era, and will inject strong impetus into China-Africa cooperation. As of October 25, the “Changsha-Addis Ababa” cargo route has performed 25 sorties, with a total of 2,213.2 tons of cargo shipped. In September, the Changsha Airport Port also imported Kenyan coffee beans in bulk by direct air transport for the first time. More high-quality African agricultural and food products go to the whole country through Changsha, enriching the dining table of consumers.

See also  Coronavirus in the world: Tokyo Olympics at risk

Today, Changsha has formed a stable “one passenger and one cargo” China-Africa air channel. Flowers from Kenya and seafood from Madagascar can be delivered to Changsha in as fast as 11 hours. It is reported that Changsha will rely on the newly opened Hunan-Africa cargo route to continuously improve Changsha’s cargo transfer capacity to Africa, and strive to build Changsha into a national air passenger and cargo hub for Africa.

By 2026, Changsha will strive to exceed 50 billion yuan in total trade with Africa, and introduce and cultivate more than 500 key economic and trade cooperation enterprises with Africa.

Carlotta, influencer and graduated in Medicine at just 23 years old

Covid, abolish the bulletin but the data are needed by specialists (and they will not have them)

Wanqi organized a group to go abroad to...

﻿Thousands of enterprises in Zhejiang go overseas to...

Party on the anniversary of the death of...

Who is Henry XIII Reuss, the conspiratorial prince...

The Catholic University celebrates its 101 years in...

Ankara has started requiring proof of insurance from...