Heavy rainfall in Sichuan, Chongqing, Guizhou and other places：From 08:00 yesterday to 06:00 today, northeastern and southern Sichuan, central and northern Chongqing, southern Shaanxi, western Hubei, central and western Guizhou, northern and western Yunnan, southern Guangxi, northeastern and southwestern Guangdong, northern and eastern Hainan Island, and Taiwan There were heavy to heavy rains in parts of the southwest of the island and other places, and local heavy rains (100-140 mm) occurred in Dazhou of Sichuan, Kaixian and Wanzhou of Chongqing, and Qiannan and Anshun of Guizhou.

Fiona intensifies into a Category 2 hurricane:The North Atlantic hurricane “Fiona” intensified from a first-class hurricane to a second-class hurricane on the morning of the 20th, Beijing time. m/s), and the central minimum pressure is 968 hPa.

In addition, tropical storm “Madeline” in the northeast Pacific has weakened in the past 24 hours.

In addition, from the 21st to the 22nd, there were moderate to heavy rains and local heavy rains in parts of southern South China.

In the next three days, there will be moderate to heavy rains, local heavy rains or heavy rains, and strong convective weather such as thunderstorms and strong winds in some places along the western coast of the United States, West Africa, northern South America, and southern Brazil.

North Atlantic Hurricane Fiona will intensify as it moves east-northeast at 15-20 kilometers per hour.

In addition, tropical storm “Madeline” in the northeast Pacific will continue to weaken and move westward at a speed of 10-15 kilometers per hour.

From 08:00 on September 21st to 08:00 on the 22nd,Mountainous areas in southwestern Xinjiang, southern and eastern Qinghai, western and southern Gansu, most of Inner Mongolia, central and northern North China, most of Southwest China, western Hubei, northern Hunan, central and southern Guangxi, most of Guangdong, Hainan Island, southern Taiwan Island, etc. There are light rains in some areas. Among them, there are moderate to heavy rains in parts of eastern Tibet, southern Qinghai, southern Sichuan, southern Chongqing, western Yunnan, southern coastal Guangxi, southern Guangxi, and Hainan Island. Local heavy rains (50-60 mm) along the eastern coast of Hainan Island and other places. There are winds of magnitude 4 to 6 in parts of central and western Inner Mongolia, northern North China, and southwestern Northeast China (see Figure 1).

From 08:00 on September 22 to 08:00 on the 23rd,There are moderate to heavy rains in parts of western Heilongjiang, southeastern Inner Mongolia, central and western Jilin, Liaoning, eastern Tibet, northwestern and southern Sichuan, southern Chongqing, northern and southwestern Yunnan, southern and eastern Guangxi, and Hainan Island. There are local torrential rains (50-70 mm) in the provinces, southwestern Jilin, northern Liaoning, southeastern Tibet, northern Yunnan, and southern Hainan Island. There are winds of magnitude 4 to 6 and above in parts of central and eastern Inner Mongolia, North China, Huanghuai, Jianghan, Jianghuai and other places (see Figure 2). 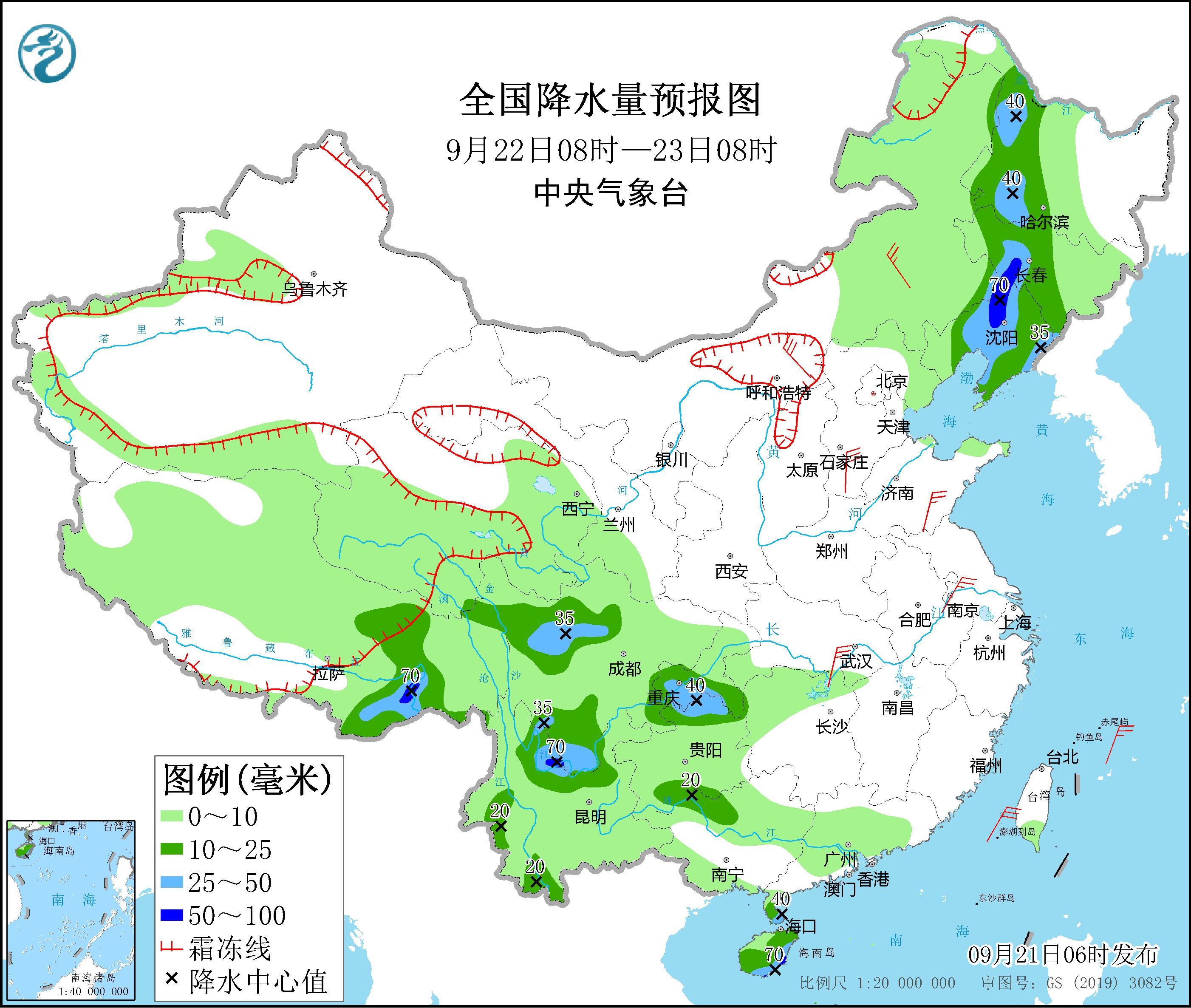 From 08:00 on September 23 to 08:00 on the 24th,There are moderate to heavy rains in parts of central and eastern Heilongjiang, most of Jilin, eastern Tibet, northern and southern and northeastern Sichuan, most of Chongqing, northern and western Yunnan, and southern Hainan Island. Among them, southeastern Heilongjiang, eastern Jilin, Tibet There are local torrential rains (50-70 mm) in the southeast and other places. There are winds of magnitude 4 to 6 in parts of southeastern Inner Mongolia and eastern Northeast China (see Figure 3). 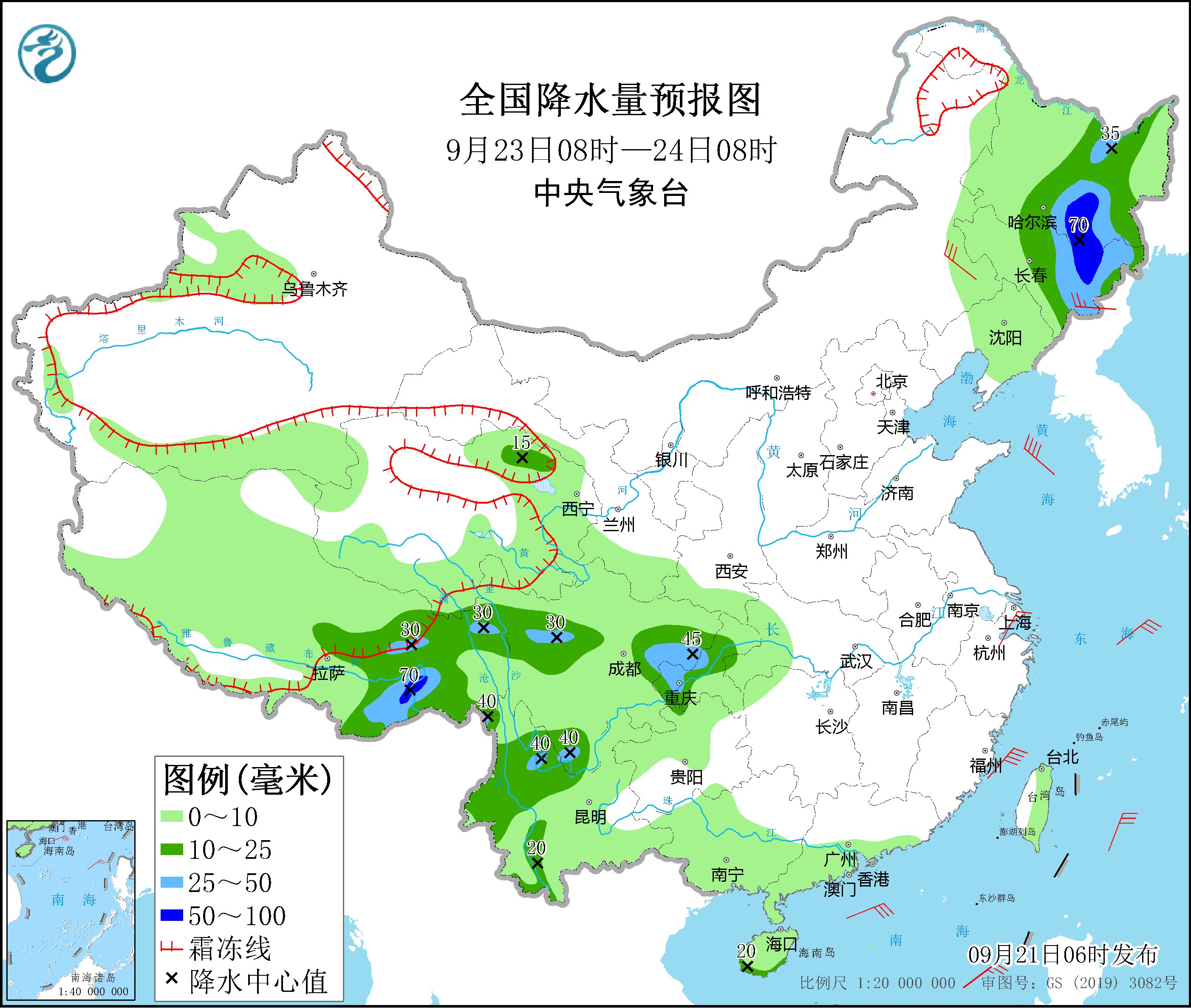 1. Pay attention to the strong rainfall and possible secondary disasters in Sichuan, Chongqing, Guizhou, Yunnan and other places;

3. Pay attention to the development trend of meteorological drought in Jiangnan, Jianghan, and western Jianghuai.

Eason Chan sings 18 consecutive concerts in the Red Pavilion in December, starting with Hong Kong as the starting point of the world tour_Eason_Concert_Tickets

Cainiao teamed up with Lazada to launch the first stop of the special line for the apparel industry to take the sea to land in Chaoshan, Guangdong – yqqlm

Suspicion that his employees are slow to do...