Xinhua News Agency, Beijing, June 18 (Xinhua) — Russian President Vladimir Putin criticized the West for deliberately undermining the current global economic norms at the plenary session of the 25th St. Petersburg International Economic Forum on the 17th. Ukraine announced on the 17th that it will cancel visa-free treatment for Russian citizens from July 1.

At the plenary session of the 25th St. Petersburg International Economic Forum held on the 17th, Putin expounded his views on relevant political and economic issues. He pointed out that the current deterioration of the global economic situation has nothing to do with Russia’s special military action against Ukraine, and that the surge in inflation in commodity and raw material markets had already appeared long before the special military action. Due to the long-term coercion of economic policies”, Russia’s special military operation has become a “life buoy” for the West, by which they blame their own faults on Russia.

Putin said that the West has deliberately undermined the current global economic norms based on outdated geopolitical fantasies, leading to a difficult time for the entire international community, and many trade, production and logistics links previously interrupted by the epidemic have undergone new tests. The world today is undergoing revolutionary, subversive and unstoppable changes in the fields of geopolitics, economics, technology and international relations, and the West is trying to stop this historical process.

Putin emphasized that the speed and quantity of sanctions imposed by the West on Russia are unprecedented in the world, and the economic blitzkrieg launched against Russia has not been successful. Practice has proved that sanctions against weapons are a “double-edged sword”, and EU member states and European companies themselves may also suffer.

Putin said Russia is not opposed to Ukraine joining the EU because the EU is not a military bloc. What Russia has opposed has been Ukrainian military development because it poses a threat to Russia.

Putin said that Russia’s special military operation was a “necessary measure that was forced to be taken” and that “the situation will return to normal sooner or later, and it is inevitable for (Russia) to improve relations with Ukraine.” Putin also stressed that Russia will not threaten other countries with nuclear weapons.

This is a photo of damaged buildings and vehicles in North Saltovka, east of the city of Kharkiv, Ukraine, on June 1. Published by Xinhua News Agency (Photo by Peter Drucker)

The TASS news agency reported on the 17th that some Ukrainian militants who were besieged in the nitrogen fertilizer plant in Severo-Donetsk had begun to surrender. It is also reported that the number of Ukrainian troops stationed in the industrial area of ​​Severo Donetsk is about 2,500, a quarter of which are foreign mercenaries.

Ukrainian President Volodymyr Zelensky posted on social media on the 17th that in the face of unprecedented threats to Ukraine’s national security, sovereignty and territorial integrity, as part of the response measures, he suggested that the government revise the policy on the entry of Russian citizens.

See also  Use: Shooting in a North Carolina school, a student dies

Ukrainian Prime Minister Shmegar announced on the same day that the government decided to cancel the visa-free treatment for Russian citizens from July 1. 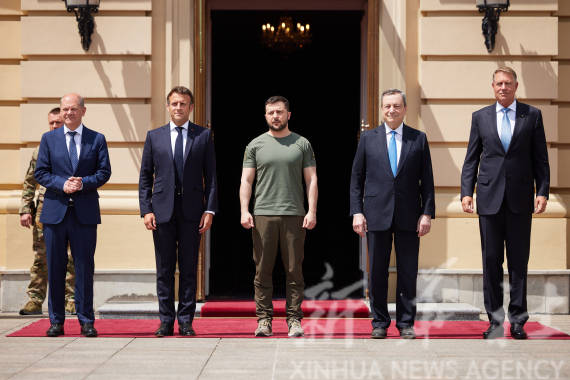 According to the Ukrainian state news agency on the 17th, the Ukrainian Presidential Press Secretary Nikiforov denied the rumors that some EU leaders had persuaded Zelensky to negotiate with Russia. He said that when Zelensky met the leaders of France, Italy, Germany and Romania in Kyiv on the 16th, the parties said that only Ukraine could decide the timing and terms of its negotiations with Russia.

The Ukrainian State News Agency reported on the 17th that as of the morning of that day, in the Luhansk region, the Russian army was still shelling the cities of Severo-Donetsk and Lisichansk, causing many casualties; In the Tsk region, the main targets of Russian artillery and missile strikes of various calibers are Avdivka and other towns.

[Video Game Crazy]Games such as “FF VII Ever Crisis”, “Moore Manor”, “Exploding Cat” and “Heroes of the King’s Collar” in the mobile phone weekly newspaper – Bahamut

Draghi Erdogan, the meeting in Turkey on Ukraine

Casellati in Algiers for the national holiday

Gas, this is how the strike in Norway...