The world’s major stock indexes were mixed. Only the Dow rose in the three major U.S. stock indexes, while individual stocks closely related to the economy rose, while technology stocks and other growth stocks fell. 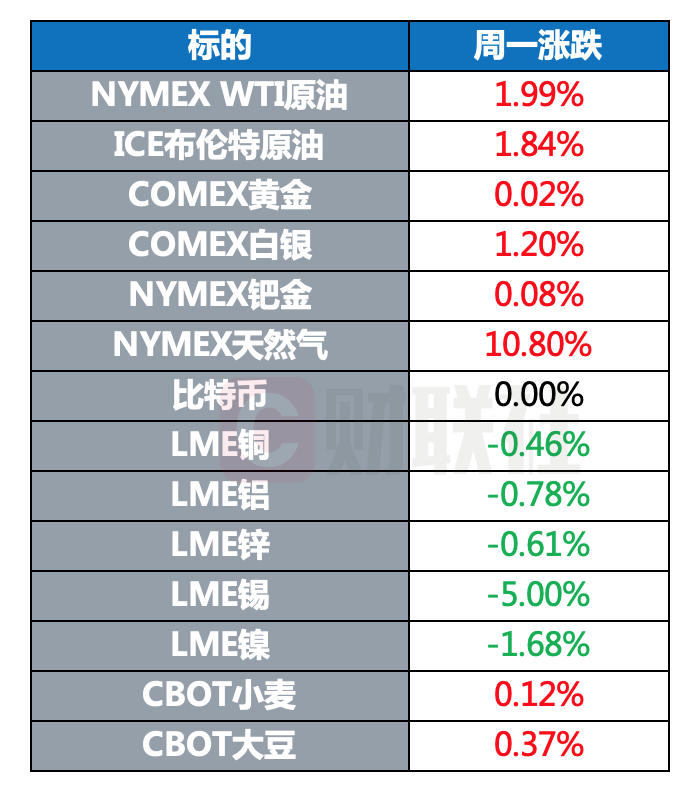 MidlandPresident Powell will attend the Senate on TuesdayBankDuring the hearing of the committee, according to media reports, Powell stated in his speech that as the U.S. economy recovers from the epidemic, rising prices and employment difficulties may last longer than expected.MidlandThe Reserve Bank will take action when necessary to curb inflation.

[US Senate Republicans block the increase in debt ceiling]

On Monday, local time, Republican senators blocked the Senate from advancing the review of the debt ceiling and government financing legislation. The draft proposed to extend the US federal debt ceiling to December 2022 and maintain the federal government until after September 30.

On Monday of the same day, Boston Fed Chairman Rosengren and Dallas Fed Chairman Kaplan announced their resignations. Earlier media reports stated that Rosengren and Kaplan participated in a large number of stock transactions in 2020.

[United Nations Conference on Trade and Development: The vaccination rate of 46 least developed countries in the world is only 2%]

On September 27, local time, the United Nations Conference on Trade and Development released the Least Developed Countries Report 2021. The report shows that there are a total of 46 least developed countries in the world. These countries have a low rate of new crown vaccination. Only 2% of the population are vaccinated, compared with 41% in developed countries.

European Commission Trade Commissioner Valdis Donbrowski said in a speech at Johns Hopkins University in the United States that he is cautiously optimistic about resolving the steel and aluminum tariff dispute between the United States and Europe. From June 1, 2018, the Trump administration began to impose tariffs on steel and aluminum products imported from the European Union and other economies on the grounds of national security.The EU implemented countermeasures on the 22nd of the same month,

The Governor of the Bank of England Bailey said that inflation may be slightly higher than 4%.If necessary, will passBankinterest rateActions to respond to the inflation problem, not through QE. Some products imported from China will be subject to tariffs. Although the current president of the United States has changed, the United States is still imposing this tariff.

See also  Biden assures: I don't want a conflict with China, but democracy is competing with the autocracies of the world

[Germany’s manufacturing exports are expected to rebound again in September]

According to data released by the German think tank Iver Institute for Economic Research on September 27, Germany’s September manufacturing export expectations index rose again after falling continuously in the previous two months, increasing from 17.0 points to 21.0 points month-on-month. Clemens Pfister, director of the Iver Institute for Economic Research, stated that despite the impact of the procurement crisis of raw materials and intermediate products, German industrial exports are surprisingly strong.

On September 27, local time, according to the Russian Federation Veterinary and Animal and Plant Health Supervision Service, an African swine fever epidemic was discovered in the Milatog pig farm of an agricultural company in the Russian Belgorod region. According to the order of the governor of Belgorod region, the pig farm where the epidemic was discovered has set up an isolation zone, delineating a radius of 5 kilometers from the epidemic area as a threatened area, and a range of 10 kilometers as a monitoring area. The Russian Federal Veterinary and Animal and Plant Health Supervision Service stated that it will take measures to prevent the spread of African swine fever.

Monday, local time,PfizerSaid that the company has vaccinated the first subject in a flu vaccine trial based on mRNA technology. It is reported that,PfizerEarly trials in the United States will be carried out in healthy people aged 65-85. Kathrin Jansen, Pfizer’s head of vaccine research and development, said that the new crown epidemic has allowed the company to take advantage of the huge scientific opportunity of mRNA, and influenza is still an area where vaccines are needed.

[India’s anti-monopoly agency responds to Google’s lawsuit: it did not disclose the investigation report and will keep it confidential in the future]

A judge in India said on the 27th that the Indian antitrust regulator, the Competition Commission of India (CCI), has agreed to Google’s request to keep some of the information provided by Google during the investigation confidential, but CCI denied that it had previously leaked the investigation report to the media.

On Monday, local time, Facebook announced that it would invest 50 million U.S. dollars and cooperate with some organizations to establish Metaverse in the form of a responsible person. Facebook says new XR projects and researchfundInvestment will be made globally in the next two years to ensure that Metaverse technology is constructed in an inclusive and empowering way. The company said it plans to cooperate with researchers in four areas, including data privacy and security, so that users can get help when they see uncomfortable things in the metaverse.

CitigroupCEO Jane Fraser said on Monday that the company will appoint former U.S. Treasury Department official Brent McIntosh as general counsel and company secretary. It is reported that McIntosh previously served as the Deputy Secretary of International Affairs of the US Treasury Department and played a key role in formulating policies to deal with the economic impact of the new crown epidemic.

If the iPhone 13 is not repaired by the original factory, the Face ID will not be used