Iranian adviser hints closer than ever to a deal |Iran_Sina Finance_Sina.com

Iranian adviser hints closer than ever to a deal

Industry insiders estimate that Iran could increase production by as much as 900,000 bpd within three months of the nuclear deal, and could bring production close to its capacity saturation level of about 3.7 million bpd within six months. On Tuesday, Iran formally responded to the text of the nuclear deal proposed by the European Union. Iran’s stance on the latest draft agreement has been communicated to EU chief envoy Borrell and will receive a reply from the EU within the next two days, the Iranian Student News Agency, citing “informed sources”, said, without giving further details.

Mohammad Marandi, an adviser to the Iranian negotiating team, tweeted on Tuesday that Iran has “expressed its concerns about the draft, and the remaining issues are not difficult to resolve,” echoing what Iran’s foreign minister said on Monday, that if the U.S. can Respond flexibly and “deal” is possible.

These concerns are based on past US/EU violations. I can’t say there will be a deal, but we’re closer than ever, and any final deal should protect Iran’s rights and guarantee sanctions relief.

U.S. State Department spokesman Ned Price said on August 15 that the U.S. would privately and directly provide comments to Borrell, the European Union’s high representative for foreign affairs and security policy, on the “final text” of resuming implementation of the Iran nuclear deal.

The only way to return to the Iran nuclear deal now is for Tehran to drop “irrelevant demands”. The United States will not allow Iran to acquire nuclear weapons, and will use all existing tools, such as diplomacy and sanctions, to unite with allies for deterrence.

According to the US State Department statement, the US also confirmed that it “has received comments from Iran through the EU and is studying them and sharing our views with the EU.”

See also  Interview with Zheng Yongnian: RCEP is an inclusive multilateralism China should seize the opportunity of the "limited globalization era" to continue to deepen opening up_Economy_Country_Trade

According to the International Energy Agency,If the deal comes to fruition, Iran could ramp up oil sales within a few months, adding hundreds of thousands of barrels a day to supply by the end of the year. This will help ease global markets strained by the Russian-Ukrainian conflict.The prospect of a quick recovery in Iranian crude supplies has helped keep benchmark Brent below $100 a barrel this month。

Of the 100 million barrels of oil in storage, about 40 million to 45 million barrels are crude oil, while the rest is a light oil, said Iman Nasseri, managing director of energy consultancy FGE in Dubai. 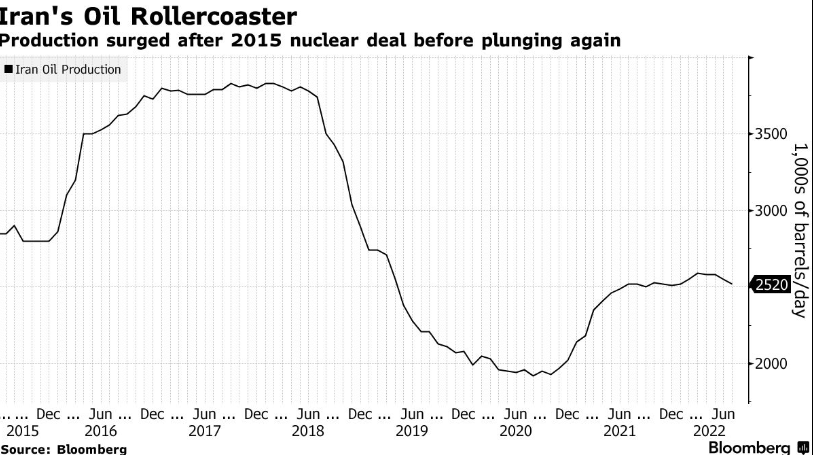 It is reported that Iran now produces about 2.5 million barrels of crude oil per day. After the 2015 agreement, it took about three months to increase production by 700,000 barrels per day and a year to restore full capacity. Subsequently, former US President Donald Trump withdrew from the agreement in 2018.

Notably, once the stored oil is released, the greater challenge will come from restoring dormant fields and arranging contracts, ships and insurance to transport the barrels. The good news is that Iran has maintained its oil fields and relationships with key customers during years of being excluded from global trade.

Iran has repeatedly expressed its willingness to reach an agreement with the United States on reviving the 2015 nuclear deal. Once an agreement is reached, the increase in Iran’s marginal crude oil exports will break the existing supply and demand pattern, opening up room for oil prices to fall. Of course, the negotiation may still fail, and the oil price will fluctuate greatly.

The troubles and mishaps of middle-aged dramas

Accelerate the improvement of the housing security system and accurately implement the preferential policy of buying and renting houses | Opinion_Sina Finance_Sina.com

What are the main parts of a goalkeeper...

These three things reflect the truth about the...

How to take photos with Rembrandt Lighting.

Three years after Brexit, where will the UK...