Home World Let History Dialogue with Reality and Guide the Future – A Glimpse of the Progress of my country’s Cultural and Expo Work – Xinhua English.news.cn
World

Let History Dialogue with Reality and Guide the Future – A Glimpse of the Progress of my country’s Cultural and Expo Work – Xinhua English.news.cn

Museums are important places for the protection and inheritance of human civilization. Recently, during his inspection in Xinjiang, General Secretary Xi Jinping came to the Xinjiang Uygur Autonomous Region Museum to visit the “Xinjiang Historical Relics Exhibition”, watch the national epic “Manas” rap show, and cordially communicate with the inheritors of “Manas” intangible cultural heritage. chat. On July 8, on the occasion of the 110th anniversary of the founding of the National Museum of China, General Secretary Xi Jinping replied to the old experts of the National Museum of China and expressed his ardent hope to the cultural and museum workers. How do cultural and blog workers thoroughly study and implement the spirit of General Secretary Xi Jinping’s important reply? What is the development status of my country’s cultural and muse field in recent years? Reporter conducted an interview.

Recently, “Accumulation and Dissemination – Archaeological Achievements Exhibition of the National Museum” opened. In the exhibition hall, there is a different piece of glass: it looks ordinary at first glance, but with a touch of your finger, it becomes a display screen. Click on the text, and the screen “changes in seconds” to the archaeological site. The rich information displayed by multimedia means and the objects in the showcase complement each other and complement each other. This OLED screen is an exploration of the National Expo in recent years to “make cultural relics come alive”. It is reported that the first original virtual Homo sapiens of the National Expo will also be “joined” in the near future, becoming a “guide” for the audience to travel through time and space and dialogue with history in the museum.

“Museums are important places to protect and inherit human civilization, and cultural and museum workers have a glorious mission and a heavy responsibility.” On July 8, General Secretary Xi Jinping affirmed the work of the museum in his reply to the old experts of the National Museum of China. Since the 18th National Congress of the Communist Party of my country, under the great attention and care of the CPC Central Committee with Comrade Xi Jinping as the core, various museums in China have made continuous progress in the construction of venues and facilities, research on collection protection, display and promotion of cultural exchanges between China and foreign countries. The important role of work has become increasingly prominent. 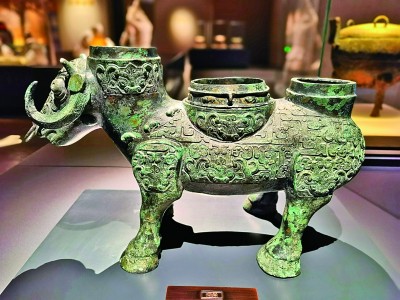 In the Shanxi Bronze Museum, the audience can touch the replicas and “communicate cordially” with the bronzes. The picture shows a replica of the bronze sacrificial statue.Photo by Li Yun, reporter of Guangming Daily/Guangming Pictures 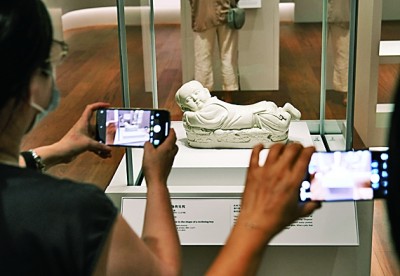 See also  Durant’s mother shouts Tucker: This is a basketball, not a football game_Wanda

Live, cultural self-confidence can be seen and felt

To visit a museum is to listen to the dialogue between history and reality. How to make this dialogue more vivid, museum people continue to explore.

In the Hubei Provincial Museum, the holographic projection of Zeng Houyi’s chimes attracted many audiences. In the interactive experience area, hold a bell hammer and strike the virtual chime, and the chime will swing with the strike through the induction device, making the corresponding musical sound.

Guangxi Hepu Han Dynasty Culture Museum uses modern animation technology to make the lake blue glass speak, lift the beam and copper pot to sing poetry and write poems… The moving image of the collection is lovable and lovely, telling the world that Hepu was the origin of the “Maritime Silk Road” in the Han Dynasty. Hong Kong’s long history and prosperous scene.

The “Jinsha Sun Festival” pioneered by Chengdu Jinsha Site Museum has been held for 12 sessions so far, and the new model of “Night Tour of Jinsha” museum at night is very popular. Focusing on the ancient Shu civilization, the museum has created and launched various types of literary and artistic works, such as musicals, animated films, string quartets, oil paintings, and modern dance dramas, developed more than 3,000 cultural and creative souvenirs, planned international cultural relics and poetry festivals, and held “Jinsha Contemporary Art”. Season”, pushing the Sands Cultural IP to a new stage of global development. Curator Zhu Zhangyi told reporters that they are still exploring new concepts of crowdfunding, crowd-creation, museum-school cooperation and curation, and extensively attracting the participation of social and school resources to enhance the relationship between the exhibition and contemporary life and art.

In the view of Du Jiale, director of Nantong Museum Garden, to “live” cultural relics is to integrate cultural relics into people’s lives, return to society, and serve the public. Bring it home, let the local audience find the memory of the old city, let the foreign audience feel the regional customs, and make the cultural self-confidence understandable and perceptible.”

Going out of the museum and “sending the exhibition to my side” is another way to make cultural relics come alive.

In November 2019, the exhibition “Reading the City – Pursuing the History of Beijing City” sponsored by the Capital Museum and Shoukai Group was held at the Shoukai Plaza in Huilongguan. Themed exhibitions, fun activities, interactive games, multimedia displays… The rich and colorful forms make this super-large community with 250,000 permanent residents cheer. “I especially like this ‘Reading City puzzle game’!” Many primary school students crowded in front of the distinctive three-dimensional puzzle teaching aids, trying again and again. was imprinted in their hearts.

“This is one of the capital museum’s touring exhibitions into the community. Our ‘Reading the City’ series of exhibitions, tailor-made learning and interactive social education activities for young people, have received a total of 2,121 schools and about 290,000 students in the city. Visiting and studying has attracted a group of young ‘fans’.” Han Zhanming, director of the Capital Museum, told reporters.

Jin Minghua, director of the Yanbian Museum, introduced that they have sent exhibitions such as “Border Treasures – Ancient Cultural Relics and Fine Picture Exhibition” and “Blood Soul – Yanbian People’s History of Anti-Japanese Struggle” to communities, campuses, military camps, enterprises, and villages in the form of mobile exhibitions. etc., so that the residents can better understand the history and development of their hometown.

In the three years since its opening, Xi’an Jiaotong University’s Westward Relocation Museum has brought exhibitions to Hong Kong, Jiangxi, Fujian and other places through “online + offline”, “on-campus + off-campus” and other forms; and the construction of 5G+AR/VR exhibition halls, Let the spirit of moving westward spread wider and wider.

On July 11, at the National Museum of China, the staff of the “Origin of Italy – Ancient Roman Civilization Exhibition” introduced the exhibits to the visitors.Xinhua News Agency

It is essential to protect the splendid cultural heritage, tell the stories behind the cultural relics, and lay a solid foundation for academic research.

Focusing on the sources of materials and production methods of the artifacts unearthed at the Jinsha Site, Chengdu Jinsha Site Museum has established cooperation with relevant research teams from Sichuan University, the Chinese University of Hong Kong, the University of Chinese Academy of Sciences and other universities. and other institutions to carry out cooperation and exchanges.

As a university museum, the Westward Migration Museum of Jiaotong University has its own advantages in academic research. “We are building the first digital platform for westward migration resources, which integrates historical archives, audio and video, book and literature databases, and online classrooms, laying the foundation for in-depth research and interpretation of the spirit of westward migration,” said curator Lv Qing.

Han Zhanming introduced that Shoubo focuses on the four dimensions of “ancient capital culture, red culture, Beijing-style culture, and innovative culture”, and has completed 61 projects at all levels, obtained 6 patents, and published exhibition catalogs, academic monographs, collection research, yearbooks, and Shoubo. There are a total of 45 books, such as essays, popular science books, etc., and gradually formed the “eight major book series” of the first blog; at the same time, the research results were transformed into exhibitions in a timely manner, such as the ancient capital culture research results were transformed into ancient capital series exhibitions “Da Liao Wu Jing”, “Da Liao Wu Jing” and “Da Liao Wu Jing”. Yuan Sandu” and “1420: From Nanjing to Beijing”, etc., the research results of Beijing-style culture have been transformed into Beijing’s seasonal exhibition series “Spring Harmony under the Sun” and the Spring Festival Zodiac Culture Exhibition. 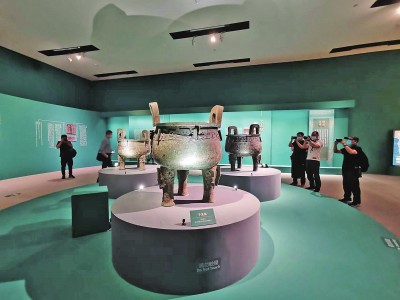 The audience visited the “Ritual and Wanfang – Special Exhibition of Shang and Zhou Bronze Ding” at the National Museum of China.Photo by Li Yun, reporter of Guangming Daily/Guangming Pictures

Going out, mutual learning among civilizations to create a better future

In recent years, the exchange of cultural relics exhibitions at home and abroad has become more and more close, and domestic museums are actively “going out” while “inviting in”.

In July 2018, in the “Perception of China·Central and North American Countries Sichuan Week·Mexico Station” event, Chengdu Jinsha Site Museum used pictures, projections, augmented reality, virtual reality and other technical means to make the American continent thousands of miles away. The audience can be immersed in the scene and feast their eyes on it. Some viewers said: “I came into contact with the ancient Shu civilization for the first time, and found that it has many similarities with the Mayan civilization, which made me have a strong interest in it”…

“We are not only based on the regional and cultural characteristics of the ancient Shu civilization, but also place it in the overall pattern of world civilization. We have successively cooperated with dozens of museums in Italy, Canada, the United States and other countries, and successively launched ‘Ancient Egypt: The World of Pharaohs and Gods’ ”Pompeii: Moment and Eternity’ series of special exhibitions on world civilizations promote exchanges through exhibitions, and promote the ancient Shu civilization to go out of their homes and into the world.” Zhu Zhangyi told reporters.

“Chinese Life in the Late Ming Dynasty”, “Marriage Customs in Old Beijing”, “Nian Customs in Old Beijing”… In recent years, a series of exhibitions carefully organized by Shoubo have landed overseas, which has aroused a large number of international friends’ appreciation for the long and splendid Chinese culture. Strong interest; and the introduction of overseas exhibitions such as “Uncharted: The Origin of Peruvian Andean Civilization”, “Rebirth: Silesia in the Baroque Period” and “Renaissance Italian Art, Culture and Life” also attracted extensive attention from domestic audiences.

“Shoubo has signed cooperation framework agreements with 21 overseas museums and cultural relics institutions, and 22 international friend museums, completing the strategic layout of international cooperation except for South America. Next, we are planning a theme of four ancient civilizations. We will fully implement the spirit of General Secretary Xi Jinping’s important instructions, tell the Chinese story to the people of the world, and help build a community with a shared future for mankind.” Han Zhanming said.

Draw the power of rejuvenation from the exploration of the source of Chinese civilization – Xinhua English.news.cn

Israel: the birthplace of the apostles Peter, Andrew...

South Africa, a “Game of Thrones” for the...

Ukraine, the stalemate and the signals coming from...