Home World More than 140,000 children in the United States have lost their loved ones due to the epidemic, and the number of deaths in Brazil exceeds 600,000
World

More than 140,000 children in the United States have lost their loved ones due to the epidemic, and the number of deaths in Brazil exceeds 600,000

Original title: More than 140,000 children in the United States have lost their loved ones due to the epidemic, and the number of deaths in Brazil exceeds 600,000 | International Epidemic Observation (October 10)

(This article continues to be updated. The time shown at the beginning of the article is the update time of this article.)

According to the epidemic tracking data of Johns Hopkins University, as of 8 a.m. Beijing time on October 10, there were a total of 237,480,669 confirmed cases of new coronary pneumonia worldwide, a total of 4,845,989 deaths, and more than 6.44 billion doses of vaccination. 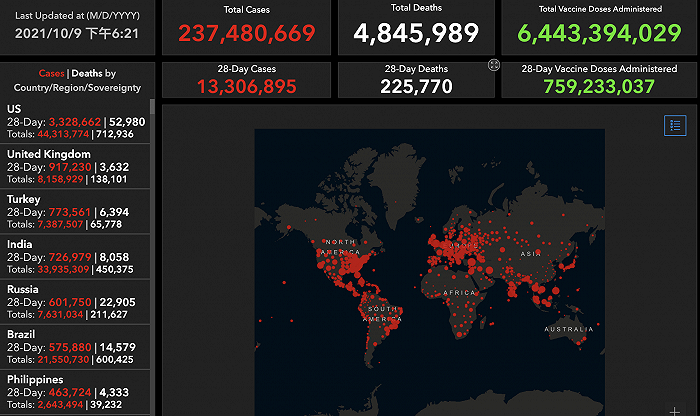 0800[The number of children infected in the United States continues to rise, Pfizer applies to expand the scope of child vaccination]

According to Singapore’s Lianhe Zaobao, a new study released by the US Centers for Disease Control and Prevention on the 7th shows that since the beginning of the new crown epidemic, more than 140,000 American children have experienced the pain of losing a close relative.

0800[Over 125,000 pregnant women diagnosed with new coronary pneumonia in the United States, the surge in infections among vulnerable groups highlights the failure of the United States to fight the epidemic]

According to data from the US Centers for Disease Control and Prevention, as of September 27, more than 125,000 pregnant women in the United States have been diagnosed with new coronary pneumonia, including 161 deaths.

0800[More than 600 immigrants who intend to go to the United States were arrested in Mexico: 9 people in 3 refrigerated trucks were diagnosed with new crown]

On the 7th local time, the Mexican police found more than 600 immigrants trying to smuggle in three long trucks heading to the United States, and nine of them have been diagnosed with the new crown virus. The local police stated in a statement that almost 90% of these immigrants are Guatemalans, and nearly 200 of them are unaccompanied children and teenagers who have been transported to the immigration center.

0800[British company survey: Europe and the United States stock up a large number of 240 million doses of new crown vaccine or will expire soon]

The Nikkei Asian Review reported on the 7th that according to data from the British medical research company Airfinity, the United States and other developed countries have purchased a serious surplus of new crown vaccines. By the end of 2021, more than 200 million doses of new crown vaccines will face the risk of expiration.

On October 9, local time, the latest statistics from the Scottish Department of Public Health showed that more than 500 confirmed cases of new coronary pneumonia detected in recent tests were related to the music festival held in Glasgow Green Park last month.

Reuters reported on October 9 that the Italian Ministry of Health reported on Saturday that there were 2,748 new confirmed cases of new crown in the country and 46 new deaths.

According to data released by the Russian Epidemic Prevention Command on the 9th, 29,362 new confirmed cases of new crowns were added to the country compared with the previous day, the highest record since December 24 last year and the second highest number since the outbreak; 968 new deaths , Which is a new high since the epidemic.

On October 8, local time, Harry Roque, the spokesperson of the President of the Philippines, said that starting from October 8, passengers from “green list” or “yellow list” countries fully vaccinated against the new crown will be quarantined during the entry quarantine period. They only need to be isolated until they get a negative result of the new crown test. The test will be carried out on the 5th day of their isolation. Subsequently, they can conduct home isolation until the end of the isolation period for 10 days.

On the evening of October 9, the Davao City Government of the Philippines issued a notice stating that Sarah Duterte, the daughter of Philippine President Duterte and the mayor of Davao City, was diagnosed with new coronary pneumonia and is a mildly ill patient who is currently undergoing isolation treatment. .

​0800[Singapore has 3,703 new confirmed cases of new crown, a new high since the epidemic]

According to the Ministry of Health of Singapore, Singapore added 3,703 confirmed cases of new crown on Saturday, a record high since the epidemic, with 11 new deaths. It is reported that more than 80% of Singapore’s population has been vaccinated against the new crown.

0800[Brazil becomes the second country with over 600,000 deaths from new coronary pneumonia]

WeChat: The next version will not consume too much battery life in the background to reduce the burden on the iPhone-Tencent WeChat

United States, a new hacker attack by the...

The Pope says the educator Montessori is committed...

Media, new Russian cyber attack in the US,...

Remembrance of the deceased faithful: Pope will celebrate...

Turkey, after the expulsion of the 10 Western...

Foreign media claim that the Sudanese military has...