Original title: Blue House said it would not condole Quan Douhuan and expressed regret for not “sincerely apologize”

China News Service, November 23, reported that after the death of former South Korean President Chun Doo-hwan, the ruling and opposition parties expressed their respective positions on this issue. The Blue House spokesperson Park Kyung-mi said at a press conference on the 23rd that the Blue House prayed for the blessings of former President Chun Doo-hwan and extended condolences to his family, but the Blue House did not plan to send wreaths or condolences.

According to Korean media reports, Park Jiong Mi pointed out that (Chuan Dou-hwan) did not reveal the truth of history in the end, and the Blue House expressed regret for not apologizing sincerely.

Park Kyongmi also said that the Blue House had no plans to send wreaths and condolences. The Blue House explained that if, as expected, the funeral would be simplified within the family, the Blue House has no plan to form a working group to assist in the “family funeral”.

However, Korean media noticed that the former South Korean President Roh Tae-woo, who passed away not long ago, enjoyed the “state funeral” treatment. The Blue House had laid a wreath in the name of President Moon Jae-in, and the president’s chief of staff Yu Yingmin went to the mourning hall to express his condolences.

There are also differences in the specifications of the Blue House on the news of the deaths of the two former presidents. According to Cheong Wa Dae’s explanation, when Noh Tae-woo passed away, he expressed his position in the form of a “pursuing briefing,” and this time he published it in the form of a “briefing on the death of former President Chun Doo-hwan.” Korean media analyzed that this reflects the negative evaluation of Chun Doo Huan’s actions before his death.

The report pointed out that when asked “Who is the subject of the blessing, is it Moon Jae-in”, the core staff of the Blue House only answered that the president’s meaning is in the line of the position text. 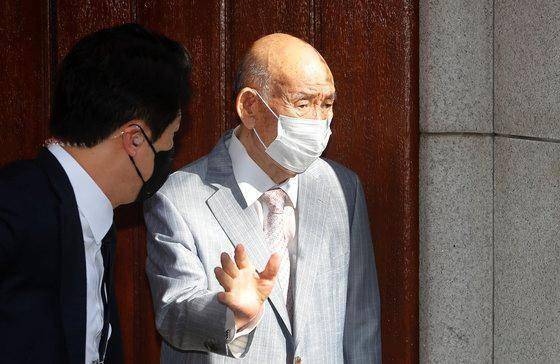 Lee Jae-myung, the presidential candidate of the Republic of Korea’s Democratic Party, regretted Chun Doo-hwan’s refusal to admit his fault and said that he would not participate in Chun Doo-hwan’s condolences.

South Korean Justice Party presidential candidate Shen Sang-joo said that Chun Doo-hwan did not reveal the truth of the incident in the end, nor did he apologize. Death without reflection is also guilty. If we look at history squarely, we cannot talk about the issue of state funerals.

It was previously reported that Chun Doo was born in 1931 and served as the 11th and 12th president of South Korea from 1980 to 1988. In 1996, Quan Douhuan was prosecuted on suspicion of military rebellion. He was sentenced to death in the first instance and was later commuted to life imprisonment. In 1997, Quan Dou-hwan received an amnesty and was released in early 1998. In 2018, he was prosecuted again for alleged damage to the deceased’s reputation. In August 2021, Quan Douhuan was diagnosed with multiple myeloma, and news of his death was reported on November 23.Return to Sohu to see more

The scale of the first month of opening exceeded 100 million yuan, Shenzhen’s cross-border financial management business accounted for nearly 40% of the total_Individual Investor

Dear Barbie, you now have your (real) car