Home World The collapse of an apartment in Florida has killed 22, the authorities plan to demolish the remaining building
World

The collapse of an apartment in Florida has killed 22, the authorities plan to demolish the remaining building

Original Title: The collapse of an apartment in Florida has killed 22, and the authorities plan to demolish the remaining buildings

Chinanews.com, July 3, according to the US Chinese website, on the evening of July 2 local time, the Mayor of Miami-Dade County, Florida, Kava said that the total number of victims in the partial collapse of a residential building in Surfside It has risen to 22, and 126 are still missing. Local officials said earlier that for safety reasons, they are considering demolishing the remaining part of the South Building.

The picture shows the collapse of an apartment building in Miami. Search and rescue are still going on.

Kava said on the 2nd that rescuers found the remains of two more victims in the ruins of the collapsed building that day, plus the remains of two victims found in the ruins on the evening of the 1st, the accident has caused 22 deaths in total. The two victims found on the evening of the 1st, one of them was the daughter of a firefighter in Miami, who was only 7 years old.

Kava said that every night since the accident has been extremely difficult for everyone, especially the affected families, but even more so on the night of the first day. For our rescuers, it is even more sad.

Kava said on the evening of the 1st that as the search mission continues, local officials are considering demolishing the remaining part of the south building of the collapsed building. 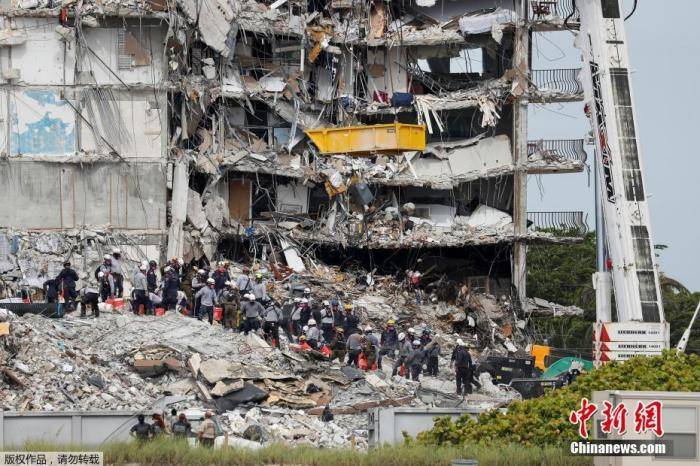 The picture shows the collapse of an apartment building in Miami. Search and rescue are still going on.

See also  Oil and geopolitics, between the US and Saudi Arabia it is the hour of frost: the reasons for the crisis

Due to concerns that the erected part of the building might collapse at any time, the search and rescue work was suspended at 2 am local time on the 1st and then resumed at around 5 pm.

Kava said that engineers are assessing the safety of the remaining parts of the South Building. Engineers are conducting continuous testing and evaluation on the site to expand the search scope to more areas under safe conditions.

US Federal Emergency Management Agency (FEMA) structural expert Scott Nachman said that they are doing relevant technical assessments and will submit the results to government officials as soon as possible. It may take a few weeks before it can be demolished.

The head of the Florida Fire Department Jimmy Pronos said that the demolition work “may be faster than we expected.” He said that the heavy equipment brought by the rescue team poses a potential threat to the still erected building.Return to Sohu to see more

Olympics, the US baseball team for Tokyo: there is also the former snow medalist

Spain, couple killed at home: one of the...

Alec Baldwin indicted in death on set of...

Boeing delivers the latest “Queen of the Skies”:...

Spain: couple killed at home, one of the...

Why Is Israel Silent As Washington Talks About...

A bear on Mars? From NASA the bizarre...

Chips and spare parts, everything comes to Russia....

No to pension reform, more and more French...