Home World The Prime Minister was “hijacked” under house arrest, network communications were interrupted, and the capital airport was closed… What is happening in this country, the Chinese Embassy is an urgent reminder! | Every net
World

The Prime Minister was “hijacked” under house arrest, network communications were interrupted, and the capital airport was closed… What is happening in this country, the Chinese Embassy is an urgent reminder! | Every net

Sudan has not been calm during the recent period. Many senior officials including the prime minister have been hijacked and put under house arrest. What happened in this country?

According to CCTV News, citing local media reports in Sudan, on October 25, local time,Prime Minister Hamduk of the Sudanese Transitional Government is under house arrestAccording to sources, an unidentified army surrounded his residence earlier in the day. According to local media reports, the military closed the bridge and road leading to Khartoum and the governor of Khartoum was arrested.

According to a Reuters report on the 25th,Internet services in Sudan’s capital, Khartoum, suspected of being cut off，Large-scale internet and communication outages have been reported across Khartoum。

According to reports,Khartoum International Airport in the capital of Sudan has been closed and all international flights have been suspended, And the road to the airport has also been blocked. At present, the Sudanese Transitional Government has not issued any statement on the current operating status of the airport.

According to Xinhua News Agency, Arab regional television reported on the 25th that the residence of Prime Minister Hamduk of the Sudanese Transitional Government was surrounded by military personnel and several ministers were arrested. The Chairman of the Sudan Sovereign Council declared a state of emergency.

This is August 15, 2020. Prime Minister Hamduk of the Sudanese Transitional Government attended a press conference in the capital Khartoum. (Issued by Xinhua News Agency)

The Prime Minister’s Office issued a statement on social media that “security forces arrested several members of the Sovereign Council and some government ministers and political leaders” and demanded that “Sudanese military leaders assume all responsibilities for the personal safety of the prime minister.”

According to news spread on local social media, Burhan, the military representative who is chairman of the Sudanese Sovereignty Council, has declared a state of emergency.

The Sudanese military leader Abdul Fatah Burhan subsequently announced that the Sovereign Council and the Transitional Government will be dissolved and another government will be established.

According to the Sudanese Ministry of Health, the Sudanese military killed 7 people and injured at least 140 people while dispersing local protests.

There was an attempted coup just a month ago

Just over a month ago, an attempted coup had just occurred in Sudan.

According to CCTV News, on September 21, local time, the Sudanese News Agency reported that the Sudanese security agencies and the military thwarted a coup attempt in the early morning of the 21st. The persons involved have been arrested and are under investigation, and the situation is under control.

According to Xinhua News Agency, Suleiman, the official spokesperson of the Sudanese Sovereignty Council, tweeted on the 21st: “Today the Sudanese army defeated the coup launched by some officers.”

According to local sources in Sudan, about 40 military officers participated in the attempted coup. Allegedly, those involved in the coup attempted to control the national radio station in the capital that morning, and most of them belonged to the armored forces.

According to Chinanews.com, the Russian satellite network quoted Lebanese media reports that on the 21st local time, the “coup attempted” incident occurred in Sudan.In the capital, Khartoum, tanks blocked the road to the bridge next to the parliament。

See also  Poland, von der Leyen: "EU will act in defense of its values". Morawiecki: no to blackmail 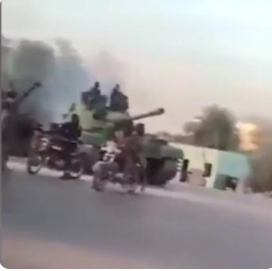 There have been many coups before

The Sudanese military overthrew the government led by then-President Omar al-Bashir in April 2019, and a transitional government was established a few months later.

According to the World Wide Web, in April 2019, a coup took place in Sudan and President Bashir was arrested by the military. Sudan’s Defense Minister Ibn Auf made a televised speech that day, announcing a series of matters including the arrest of President Bashir. Off said that the military also established the Supreme Security Council to exercise state power for two years as a transitional period.

Former Sudanese President Bashir launched a military coup in 1989 and took office until 2019. In the first ten years of his administration, the main challenge was to end the cruel and bloody civil war between the north and the south of Sudan. The civil war ended in 2005, but South Sudan finally passed a referendum for independence in 2011.

According to CCTV News, on July 11, 2019, the Sudan Transitional Military Commission announced that they had foiled a coup attempt and at least 16 people were arrested.

The Chinese Embassy in Sudan issued another security reminder

On the 25th, after the Soviet military detained officials of the transitional government, the Chinese Embassy in Sudan issued an emergency safety reminder as soon as possible, requesting that the Chinese-funded institutions in the Soviet Union immediately activate the safety emergency mechanism, concentrate the personnel of the institution to the station, and temporarily suspend work and production. Remind Chinese citizens in Sudan to take safety precautions and reserve emergency supplies, avoid going out or going to public places, and maintain unblocked contact with the embassy. In case of emergencies, they should call the police and report to the embassy as soon as possible. The Chinese Embassy in Sudan has activated an emergency response mechanism and has stored necessary emergency supplies. Currently, the embassy is operating normally and the librarians are emotionally stable.

Drivers who are not allowed to get off the car to go to the toilet are persuaded to return to the new crown. Tourists diagnosed with the new crown are praised for “saving a city”

United Kingdom, change: from masks to “pass” the...

Biden warns Putin: “If he attacks in Ukraine...

Germany, Ikea advertises an armchair with a photo...

They planned an attack during the holidays, 2...

Holidays (denied) while the country was in lockdown,...