Home World The virus transmitted in Macau is BA5.1: it has high infectivity and has not yet spread in the mainland- IT and Health
World

The virus transmitted in Macau is BA5.1: it has high infectivity and has not yet spread in the mainland- IT and Health

On June 23, according to media reports, the Chief Executive of the Macao Special Administrative Region, Ho Iat Seng, said at a press conference on the epidemic that a total of 110 nucleic acid positive cases have been found in this round of the epidemic, and the epidemic is severe and complex. He Yicheng said,The virus strain circulating in Macau this time is BA5.1is more prevalent in the United Kingdom and the United States, and is not a virus strain prevalent in the Mainland, so the traceability work is more difficult, but it is in progress, including investigations into cold chain food vendors. 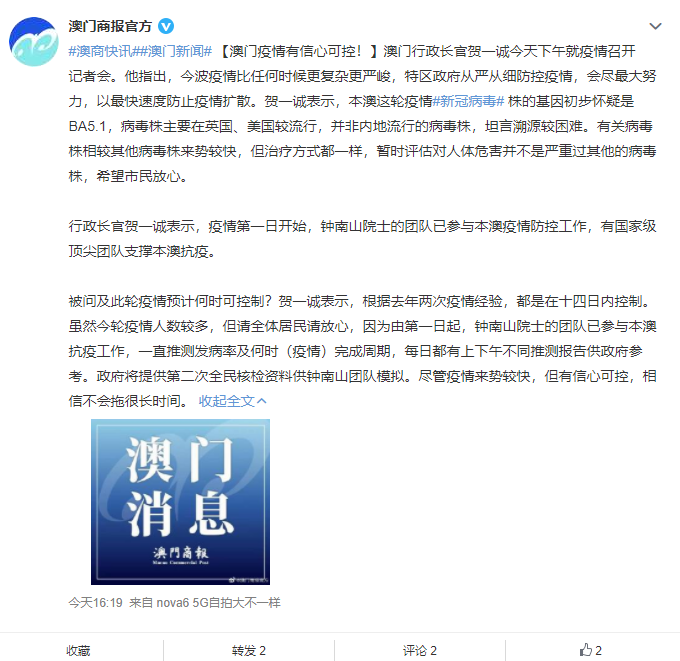 It is understood that the newly emerged mutant strains BA.4 and BA.5 have stronger transmission ability than the Omicron mutant strain BA.2, and have now become mainstream viruses in Europe and the United States.

According to the European Centre for Disease Prevention and Control (ECDC), BA.4/5 is the fastest-spreading variant reported so far, and both variants are expected to be circulating in the US, UK and other parts of Europe in the coming weeks the main strain.

Compared with the current global dominant strain BA.2, the new key mutations in the spike protein of BA.4/5 include L452R and F486V. The most important change brought about by these mutations is that BA.4/ can easily escape the human body some immune systems,Even people who have been vaccinated against the new crown virus and infected with the new crown virus cannot avoid the possibility of being infected and re-infected。

However, although the mutated virus has a stronger transmission ability, the treatment method is the same as the previous virus strain, and the harm to the human body is not more serious, so there is no need to worry too much.

cnBetaIT and healthThe virus transmitted in Macau is BA5.1: it has high infectivity and has not yet spread in the mainland
0 comment 0 FacebookTwitterEmail
previous post

Navalny’s life as a prisoner: “To re-educate myself...

Xi Jinping and his wife arrive at Hong...

At the front the armored vehicles donated by...

The fugitive: Ruja Ignatova, “queen of cryptocurrencies”, is...