At present, the state with the most cumulative confirmed cases in the United States is California, with more than 6.08 million cases; followed by Texas with about 5.04 million cases. Florida has more than 4.63 million confirmed cases and New York has more than 4.13 million. In the past week, 39 U.S. states reported an increase of at least 50% in the number of cases compared with the previous week, according to an analysis of Johns Hopkins University statistics, CNN reported.

The surge in cases has led to a shortage of medical staff and beds in swarms of U.S. hospitals. According to data from the U.S. Department of Health and Human Services, on the 8th, there were more than 138,000 hospitalized cases of new coronary pneumonia across the United States. 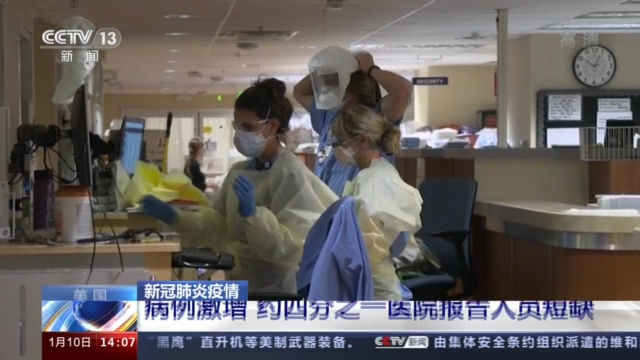 The U.S. Department of Health and Human Services said on the 8th that about a quarter of the approximately 5,000 hospitals that provided data to it reported that they were currently experiencing very severe staffing shortages, the highest rate since the outbreak. .

The surge in Covid-19 hospitalizations has also led some hospitals to cut or suspend non-urgent surgeries. In New York state, 40 hospitals have been told to suspend elective surgery due to a lack of beds.

Dragon China’s sales in 2021 will drop by 4.1% year-on-year, and only 87.1% of the annual target will be achieved_Oriental Fortune Net

Usa, a bridge collapses in Pittsburgh just before...

Ben Hodges, former head of the US forces...

Tikhanovskaja: “Repression is the new normal in Belarus....

United States-China, the telecommunications war: the license to...

Does the new local diagnosis in Shanghai divide...