Home World Why is the older the older the colder? –Because of the betrayal of immune cells-Scientific Exploration-cnBeta.COM
World

According to foreign media reports, human evolution has provided us with a certain degree of protection, enabling us to generate heat from the fat stored in the body to avoid the threat of low temperature. However, as people get older, people become more susceptible to colds, inflammation, and metabolic problems, which can lead to many chronic diseases.

Researchers at Yale University and the University of California, San Francisco (UCSF) have discovered one of the culprits in this process-the immune cells in fat that protect us from cold temperatures.

In a new study, they found that the adipose tissue of old mice lost the immune cell group type 2 innate lymphocytes (ILC2), which are cells that restore body temperature in a cold environment. But they also found that stimulating aging mice to produce new ILC2 cells actually makes them more likely to die from the cold, which is a warning story for those seeking simple treatments for aging diseases.

“What is good for you when you are young may be bad for you as you get older,” said co-corresponding author Vishwa Deep Dixit of the study. The relevant research report has been published on “Cell Metabolism” today (September 1, 2021 local time). 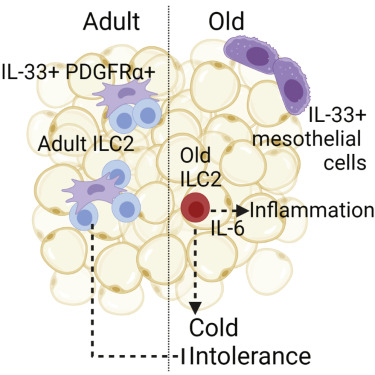 Dixit and his former colleague Emily Goldberg, who is now an assistant professor at the University of California, San Francisco, are curious as to why adipose tissue shelters immune system cells, which are usually concentrated in the nasal cavity, lungs, and skin, which are often exposed to pathogens. When they genetically sequenced the cells of old and young mice, they found that the old mice lacked ILC2 cells, a defect that limits their ability to burn fat and raise body temperature in cold conditions.

When scientists introduced a molecule that promotes the production of ILC2 in aging mice, the immune system cells were restored, but the mice were less tolerant of low temperatures.

Dixit said: “The simple hypothesis is that if we restore what we lost, then we will also return to normal life. But this is not the case. This growth factor does not expand the healthy cells of young mice, but instead makes old mice fat. The number of bad ILC2 cells increased.”

But when the researchers removed ILC2 cells from young mice and transplanted them into old mice, they found that the cold tolerance of the old mice was restored.

Dixit said: “The role of immune cells is not only to defend against pathogens, but also to help maintain the normal metabolic function of life. With age, the immune system has changed, and we need to carefully control it to restore the health of the elderly. .”

cnBetaScientific explorationWhy is the older the older the colder? --Because of the betrayal of immune cells
0 comment
0
FacebookTwitterEmail
previous post

9/2[U.S. Observation]The United States and the Taliban continue to negotiate, and the White House calls on China to think about its role in Afghanistan; polls: more than half of Americans support sending troops to defend Taiwan when China invades; U.S. President’s special envoy for climate change affairs visits Kerry China, Seek Cooperation to Address Climate Change-Voice of America

NASA plans to launch the SLS rocket in...

Joe Biden still postpones the publication of the...