Thousands of Middle Eastern refugees tried to find a place in the European Union through Belarus, but barbed wire blocked their way.

The European Union accused Belarus of carefully setting up a bureau to retaliate against the European Union and announced that it would implement a new round of sanctions; while Belarusian President Lukashenko threatened to cut off the natural gas pipeline. When the two sides were in a stalemate, Poland sent 15,000 soldiers to the border to prevent the entry of refugees, German armored forces entered Poland to provide “protection assistance”, Britain sent engineering troops to help Poland build the border wall, and Russian long-range bombers also appeared over Belarus. .

How will the situation develop? How will this crisis affect Russia’s relations with the Western world?

In the 2016 Turkish and European refugee crisis, Turkey used the refugee issue to successfully pressure the EU and carry out “refugee extortion”, and reached 6 basic principles with the EU, including that all the costs of repatriating refugees who entered Greece through Turkey should be borne by the EU and relaxed The visa requirements for Turkish residents, the European Union has accelerated the issuance of the 3 billion euros pledged in 2015, etc.

Before the outbreak of this round of refugee crisis, Belarus implemented a strict visa management policy, and the number of refugees entering EU countries via Minsk was very small. However, since the political crisis broke out in Belarus in 2017, EU sanctions have continued to increase. In the face of sanctions, Belarusian President Lukashenko tried to increase his bargaining chips with the European Union by playing the “refugee card”. In July 2021, in order to counter the EU’s comprehensive economic sanctions, Lukashenko announced a “non-cooperative” stance on refugee issues. It seems that Belarus also wants to learn from Turkey and exert pressure on the EU by playing the “refugee card” to force the EU to lift sanctions on Belarus.

Caption: Refugees waiting hard on the side of the border. Source: BBC

However, the EU’s complex mentality and policy contradictions towards Belarus have led to the escalation of the refugee crisis in White-Bosnia and Herzegovina.

On the one hand, the EU hopes that Belarus will leave Russia and move closer to the West. From the perspective of the EU, this can prove the attractiveness of the so-called “democratic and free model” in the West and Europe, and further infiltrate Russia through political changes in Belarus, and influence the direction of Russia’s political evolution; Promote eastward, strive for a more favorable geopolitical situation for the EU, and squeeze Russia’s geopolitical territory.

Because of this, the EU has been trying to change Belarus by doing both soft and hard in the past few decades. The soft aspect includes increased dialogue assistance, and the hard aspect includes targeted sanctions. However, the recent integration of Russia and Belarus has finally shattered the dream of the European Union. The European Union has not been able to draw Belarus into the European camp like it did with Ukraine.

On the other hand, the European Union has again cast a rat-in-law against Belarus, fearing that it will backfire.

Therefore, the EU must not be too “soft” towards Belarus, otherwise it may be considered to be detrimental to the so-called “principles” and image of the EU; but it dares not be too hard, otherwise it will stimulate Belarus to move closer to Russia and become more geopolitical in Europe. unfavorable. It’s really difficult to handle.

The border situation is actually a deep-seated crisis in the relations between Russia and the West.

At present, Belarus in the European territory is very important to the EU’s geopolitics, and even more important to Russia’s strategic significance. In the European part of the Soviet Union, almost all countries except Belarus have joined NATO, and only Ukraine has joined the Western camp. It can be said that Belarus is the place where Russia faces the West and the final strategic barrier. Regarding such a Belarus, Russia will certainly not stand idly by and allow trouble to happen at its own door.

For a long time, Western countries have used human rights and democracy as an excuse to interfere in the internal affairs of other countries, instigate color revolutions, and even overthrow the regimes of other countries by armed forces, leading to the expansion and prolongation of regional crises, resulting in a large number of war refugees. This is also the root cause of the refugee crisis. Now, facing refugees from the Middle East who have left their homes and want to seek asylum in Europe, the EU has not accepted it, but threatened Belarus with sanctions. Obviously, Europe adopts double standards in its treatment of refugees.

Less than a month after the signing of the Russian-Belarusian integration, seeing the EU adopts such an attitude towards Belarus, Russia naturally has to make a posture to support Belarus. This is in the context of Russian-Belarusian integration. Russia firmly safeguards the interests of its allies and is also a manifestation of its own interests. It is of great exemplary significance.

Each needs to achieve a new balance

See also  ASEAN did not invite Min Anglai to attend the ASEAN summit, Myanmar: the United States and the European Union interfere in ASEAN member states_Hangzhou

More and more refugees are entering Belarus and trying to enter Europe through the border between Belarus and Poland. This has triggered a series of diplomatic crises between the European Union, Poland and Belarus. However, as far as the current situation is concerned, the threat is a threat, and all parties will not truly let the crisis continue to ferment.

First of all, the current crisis appears to be due to the refugee problem, but it is basically a new round of competition between Russia and Europe.

Since the integration of Russia and Belarus, Belarus and Russia have almost kept the same in foreign policy. It is not difficult to see that there is Russia behind the Belarusian “refugee card”. And this refugee crisis has also expanded the contradiction between Russia and the EU from the previous ideology, regional security, energy security and other fields to the social field step by step.

However, the author does not believe that Russia and the European Union will be completely deadlocked for the sake of Belarus. The current international situation is in a very special period. The spread of the epidemic has led to intensification of social conflicts, the impact of the energy crisis, and the economic downturn. Some European countries are facing very difficult internal problems. It is difficult to use various resources to directly intervene like the Ukrainian crisis in 2014. . In fact, the United States and Europe have realized that the main intention of Belarus in playing the “refugee card” this time is to lift sanctions in exchange for more relaxed international space. Russia also knows that military intervention is bound to cause a strong backlash from the United States and Europe, and sanctions will only intensify. Deep involvement in Russia will not benefit much.

Secondly, the crisis may exacerbate the energy crisis in Europe in a short period of time, and this is one of the reasons why all parties will not let the crisis go unnoticed. The northern hemisphere has entered winter, and Europe is heavily dependent on Russian natural gas. If Belarus cuts off the transiting Russian-European natural gas pipeline, it will undoubtedly be “winter is coming” for many European countries such as Poland and Germany, and more serious energy shortages will in turn lead to more serious social problems.

On the 17th, Belarus “temporarily” closed its oil pipeline to the European Union on the grounds that the maintenance work would take three days. But cutting off the natural gas pipeline is only a threat, not an end. In fact, Russia would not want Belarus to actually cut off its pipeline. Judging from the historical Russian-European crisis, although European countries have repeatedly sung against Russia, the two sides have always exchanged information on economics. 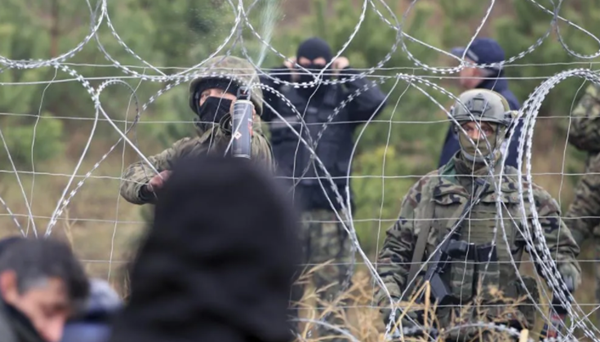 Caption: At the end of the barbed wire, soldiers use chemical spray to disperse refugees. Source: AP

Finally, in order to prevent refugees from entering, there have been voices of building border walls in some European countries. Latvia has begun building temporary barbed wire fences and building fences in key areas to prevent illegal entry of refugees stranded in Belarus. This move may be followed by other countries bordering Belarus. But all parties are also well aware that a repeat of the “U.S.-Mexico Wall” incident will not only fundamentally solve the problem of the influx of refugees, but will even escalate the geo-crisis.

The emergence of a crisis means the beginning of the game, and the game will eventually be resolved through negotiation.

One possible solution is to learn from the practice of the Turkish and European refugee crisis in 2016 and adopt a cooperation model of mutual benefit exchange. Of course, in the refugee crisis between Belarus and the EU, all parties will not easily give up their own interests and compromise with each other. After the integration of Russia and Belarus, Belarus has completely “backed” to Russia, breaking the “fragile balance” of relations between Russia and the West. balance.

What can be seen is that the two sides seem to be trying to cool the situation. Belarusian President Lukashenko said on the 15th that Belarus does not want to provoke conflict at the border and is working hard to persuade refugees to return home. Russian President Vladimir Putin expressed his understanding of the necessity of ending the crisis after a conference call lasting 1 hour and 45 minutes with French President Macron and agreed to “mitigate” the crisis.

Although the Russian and French presidents agreed to work to “mitigate” the crisis, it is foreseeable that in the future, the two countries will continue to compete in the region around border control, economic sanctions, energy supply, refugee transit, and human rights issues. On the one hand, Belarus plays the “refugee card” to try to use energy supply issues to pressure the EU, including using it as a bargaining chip to negotiate with the EU to ease sanctions, reduce interference in Belarusian internal affairs, and recognize the legitimacy of the Belarusian president; on the other hand, Russia will use this. In the second refugee crisis, it attacked the West on human rights and other issues, and strived for sufficient voice.

Beyond the eggs, the precious surprises of Fabergé jewels

Trump raised a billion dollars for the launch...

Cases of Omi Kiron strain infection have been...

The tale of Laura Shepard, daughter of the...

Ukraine, Josep Borrell: “The EU will be with...

Ukraine besieged by the Russians. US services: “Here...

Murder of Davide Giri, the survivor speaks: “I...

Turkey, failed attack on Erdogan: a bomb under...

Relives the “pelota”. The ancestor of football is...