Original title: Zhao Lijian showed the cartoon on the spot and asked three questions about what human rights does the United States protect?

On September 15, Foreign Ministry Spokesperson Zhao Lijian presided over a regular press conference. A reporter asked a question. According to reports, in the past 20 years, the United States has launched more than 90,000 air strikes in Syria, Iraq, Afghanistan and other countries, and the number of civilians killed in the air strikes is 4 or 4. 80,000 people. What is China’s comment?

Second, the United States slaughtered civilians in the name of anti-terrorism, and owed heavy debts. Since 2001, about 335,000 civilians have been killed in wars launched by the United States. Just before evacuating from Afghanistan, the US military carried out an air strike on a residential building on the grounds of anti-terrorism, killing 10 civilians, including a 2-year-old child. In the 2005 incident in the town of Adissei, Iraq, which shocked the world, the US military killed 24 Iraqi civilians indiscriminately because only one person was attacked. The brutality and bloodshed were heinous. In 2017, the United States launched the so-called “most accurate air strike” on Raqqa, Syria, resulting in the death of a large number of civilians. A former U.S. soldier stated that the U.S. drone attack was purely “killing for the sake of killing.”

Third, the United States has aggressively pursued unilateral sanctions, which have seriously endangered the human rights of the people in relevant countries. Since the outbreak of the new crown pneumonia epidemic, the use of unilateral coercive measures by the United States has not decreased but increased, leading to shortages of epidemic prevention materials in sanctioned countries such as Iran, Cuba, Venezuela, and Syria, insufficient food supplies, limited access to education and information, and humanitarianism. Confucian aid is blocked. These unilateral coercive measures without the authorization of the Security Council have brought serious disasters to the survival and development of local people. 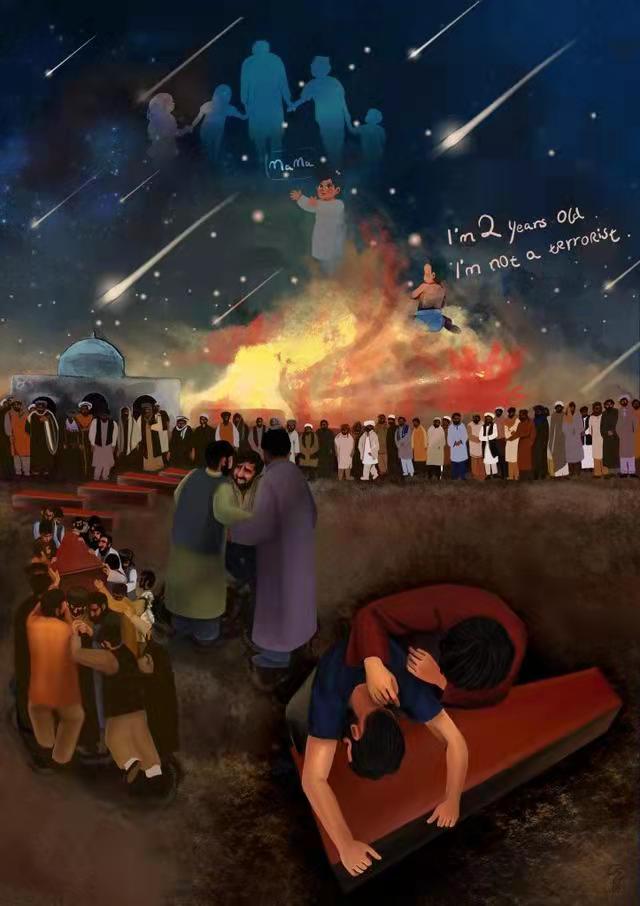 Zhao Lijian showed a cartoon to the reporters present, depicting an unusual funeral in Afghanistan. Zhao Lijian said that after the Xinhua News Agency’s overseas social media accounts were broadcast, many overseas netizens shed tears. On August 29, the U.S. military launched an airstrike and blew up a residential house in Kabul, the capital of Afghanistan, killing a family of 10, including 7 children. Afterwards, the US military only issued a statement saying that it would assess the civilian casualties caused by the air strikes. Malika and Sumaya were only two years old and were killed in an air strike. This cartoon was named “The Funeral of a Two-year-old “Terrorist””. The comic describes the moment when seven children who died were buried. In the center of the picture is a dug wooden pit. Coffins of different sizes are lined up one after the other, and the mourners are carrying a coffin into the wooden pit. (CCTV reporter Shen Yang Kong Luyuan)

Scalpers enter the market and the stock market is cold, can the iPhone 13 series grab more market share by cutting prices? _Apple