Kia, the new technological and stylistic course begins with the EV6 electric crossover

It is called Ev and inaugurates the new electrification course of Kia. The new battery-powered crossover-coupe is the progenitor of a generation that will be made up of seven other models by 2028. In practice, in that period the Ev family will fit into every context, thanks to cars of different types and sizes smaller and larger than those of the progenitor of the species. The Ev6 is, therefore, the technological manifesto of the new era of Kia and at the moment it can also be considered the flagship of the brand, despite the build between that of medium and large cars.

Thanks to the possibilities offered by the E-Gmp architecture, developed by the Hyundai-Kia group for all the next full-electric models, it has a range that includes mono and dual-motor versions, therefore also with electric all-wheel drive, with powers ranging from 225 to 585 horsepower. A range that allows it to contrast not only with cars of similar build, such as the cousin Ioniq5 or the Audi Q4 e-tron and the Volkswagen Id.4 or the Tesla Model Y, but also with larger proposals and purely sports brands . For example, some versions of the Porsche Taycan. And even top-of-the-range cars like the BMW iX

Similar possibilities set the Kia Ev6 apart from the Ioniq5, despite the fact that they use the same platform suggests. In reality, that of the Ev6 has been customized with a shorter wheelbase, 2.90 instead of 3 meters, to increase dynamism. Apart from that, the layout always includes the battery pack placed between the axles, does not make the length of 4.70 meters cross over and allows the proportions of the body to be balanced. The sleek line of the Ev6 is original, well sculpted, and even appears much more robust than it actually is. Consequently, on board the amplitude of the passenger compartment is not surprising also in the rear area, favored both by the minimalist and minimally invasive style of the furniture and by the flat floor, which moreover does not affect that of the cargo area, more than appreciable in relation to the size of the car. The presentation of the environment is pleasant, although some coatings are more pleasing to the eye than the touch, and very spectacular. In fact, the atmosphere is permeated by extensive digitization, impressed by the spectacular curved widescreen formed by the 12.3 ”displays of the configurable instrumentation and the infotainment system with Uvo system. The latter brings many touch controls, some of which, however, can be activated involuntarily, and is based on the latest generation of the Uvo system. Hence, it is extensively connected, interacts wirelessly with smartphones and overall is well manageable. It is just a pity that the navigator does not always provide timely information. The Ev6 family also offers numerous latest generation Adas. 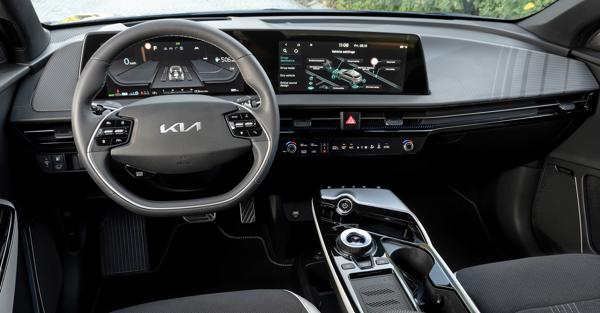 The 325-horsepower four-wheel drive Ev6 Gt-Line is currently the top-of-the-range version because the 585-horsepower one will arrive next year. Like all the others marketed in Italy, it is powered by a 77.4 kWh lithium-ion battery, which can be recharged in a short time thanks to the 800 V mains voltage. Obviously, by finding the superfast columns. To regenerate the battery, which with the optional Vehicle to Load (V2L) system transforms into a power bank to power external electrical devices and grids, you can also count on four energy recovery steps. Among these there is also the one-pedal function that comes to completely stop the car. It is a comfortable mode but above all very effective in traffic, especially when combined with the Eco configuration. With the latter, the powertrain of the Gt-Line already offers a perky temperament, which is accentuated in a proportional manner with the Confort and the Sport. Using the latter, the character of the Ev6 also makes room for fun driveability, as we have seen on the winding roads of the Andalusian hinterland, inspired by the reliable behavior given by the not too soft set-up, but not penalizing for the good general comfort.

Evergrande shipyards reopen after the coupon paid in extremis