With the fifth generation, Sportage, Kia’s best seller, changes radically with a high jump comparable to that which took place between the first series almost 30 years ago and the third series of 2006 which marked a turning point in terms of brand image, quality. perceived and competitive level against market references such as Nissan Qashqai. Now the new Sportage launched at the end of 2021 and arriving in these days raises a challenge and this time there are no Japanese or French SUVs and crossovers in the crosshairs but the most noble proposals of the German brands. There are four trim levels: Business, Style, GT Line and GT Line Plus and the price list ranges between 30,000 and 45,000 euros.

Climbing aboard, the feeling that the parts have reversed is evident, at least in the top of the GT-line Plus range, which offers everything that today is right to want from a 2022 car. And we are talking not just about leather seats. , but of substantial things like level 2 driving assistance (which by the way works well and does not act abruptly) and modern infotainment. The dashboard is in fact dominated by digital displays with the 12.3 “instrument cluster (10.12” in the basic Business version) and that of the 12.3 “curved multimedia system that acts as a user interface under which an open source operating system runs on Android based, updatable online (Ota) that allows multiple users, well-designed ergonomics (not a tablet stuck on the dashboard) and a well-executed integration with the smartphone, in fact there are Android Auto and CarPlay. And here a side note opens: even with the new Kia the superiority of Google maps emerges and also in terms of usability there is no history compared to any integrated on-board system, perhaps with more attractive but not very usable graphics.

Kia Sportage V also offers a fair amount of equipment in the basic Business fleet format version, where, however, the keyless entry is missing (standard on the others but we would always like it: it is anachronistic in 2022 to start a car with the key to be turned in the panel. we have seen the latest generation of premium German cars that still light up like this and stuff to scream: “welcome to 1970!”). And there are, in the top version, heated and ventilated steering wheel and front seats. In short, Sportage reiterates how important it is to be and not to appear in today’s world where technology does not have to be a add on but integrated into the car as a supporting and qualifying element. And in fact, in the more expensive set-ups we find goodies (already seen also on Sorrento) such as the digital rear-view mirrors that appear in the instrument cluster when the arrow is put on. Nice and useful. The harman / kardon audio system is also among the pluses. 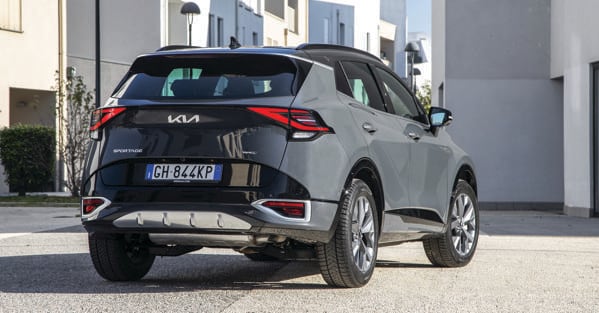 The design of the new Sportage, based on the stylistic language baptized Opposites United does not go unnoticed and in fact its look is divisive: you love it or hate it with its sharp lines, sharp edges and the waistline that breaks on the C-pillar. Not to mention the full led matrix headlights with the boomerang Dlrs: truly original. And it must be said that the car is much more photogenic on the road than in the photo. The dimensions are quite compact: the car is 4,515 mm long, 1,865 mm wide and 1,645 mm high with a tailgate that gives it an SUV coupé look, an accentuated stylistic connotation if you opt for the roof with a contrasting color compared to the bodywork . The wheelbase of 2,680 mm ensures good roominess also for rear passengers. The luggage is housed in a compartment that varies between approximately 590 to 1,800 liters.

The range includes only mild and full hybrid electrified powetrains and plug-ins. There are in fact a 1.600 T-Gdi light hybrid petrol in two power levels (150 or 180 hp), a turbodiesel (good for fleets and for those who go a long way as commercial agents) 1.600 cc Crdi with 136 horsepower. An exception to the electrified range is a LPG version, only thermal, which will arrive in the second half of the year while now the mild hybrids and the full hybrid that we tested between Milan and Courmayeur are at launch. It boasts a 1,600cc 180hp Tgdii mated to a 4.2kW ​​electric motor (with a 1.49kWh lithium-ion battery). It is inserted in the automatic gearbox for a total power of 230 horsepower.

Ukraine, 8,500 US troops on alert. Biden calls allies in Europe