Home News COVID-19 variants: What is after Delta and how are the new variant strains named? -IT and Health-cnBeta.COM
News

COVID-19 variants: What is after Delta and how are the new variant strains named? -IT and Health-cnBeta.COM

According to foreign media New Atlas, within a few months, the Delta mutant strain has become the world’s main SARS-CoV-2 strain.But what is after Delta, how are the new mutant strains named, and what is the “Variant of Concern”?

For most of the first year of the pandemic, researchers have seen the SARS-CoV-2 virus mutate and change as it spreads around the world. The constant mutation of the virus is expected. In fact, the genome changes of viruses can be so obvious from person to person, and scientists can trace the chain of transmission with amazing details.

Most of the mutations scientists first saw in SARS-CoV-2 were relatively benign. It seems that no particular variant performs better than other variants. However, by the end of 2020, a new SARS-CoV-2 variant is clearly dominant in the UK.

Originally known as B.1.1.7 (also informally known as the British or Kent variant), the rapid spread of this variant clearly shows that certain mutations have produced a clear transmission advantage. Since then, researchers have been able to determine the unique genomic characteristics of the variant and label other virus lines with similar characteristics.

In May, the World Health Organization (WHO) stepped in to help clarify the growing confusion regarding the names of mutant strains. Although scientists often refer to these new variants by their specific pedigree tags (B.1.1.7; B.1.351; B.1.617.2; etc.), many people find that the source of the variant (UK Variants; South African variants; Indian variants, etc.) to mark a variant more easily. The WHO noted the “stigmatizing and discriminatory” nature of variants with geographic names and introduced a universal naming system based on the Greek alphabet. For research purposes, the Department of Science is still recommended, but national authorities and media agencies are urged to adopt these new, neutral labels.

See also  One week of world public opinion focus: Meng Wanzhou returns to China and competes with Taiwan to join the CPTPP-FT中文网

But if new variants are always appearing, when will they get an official label?

The WHO Virus Evolution Technical Advisory Group has established three levels of classification for new SARS-CoV-2 variants: alerts that require further monitoring, “variant strains of concern” (VOI) and “variant strains of concern” (VOC). Now that scientists have known what kind of genomic mutations can significantly change the severity or spread of SARS-CoV-2, new variants that may become problematic can be discovered more quickly. These variants are marked as “alerts requiring further monitoring.”

The WHO’s current working definition of this designation is: “A SARS-CoV-2 variant whose genetic changes are suspected of affecting the characteristics of the virus. There are some signs that it may pose future risks, but the phenotype or epidemic The evidence of the pathological impact is still unclear, and monitoring and repeated assessments need to be strengthened, and new evidence is awaited.”

There are currently 13 SARS-CoV-2 variants in circulation designated as alerts requiring further monitoring. 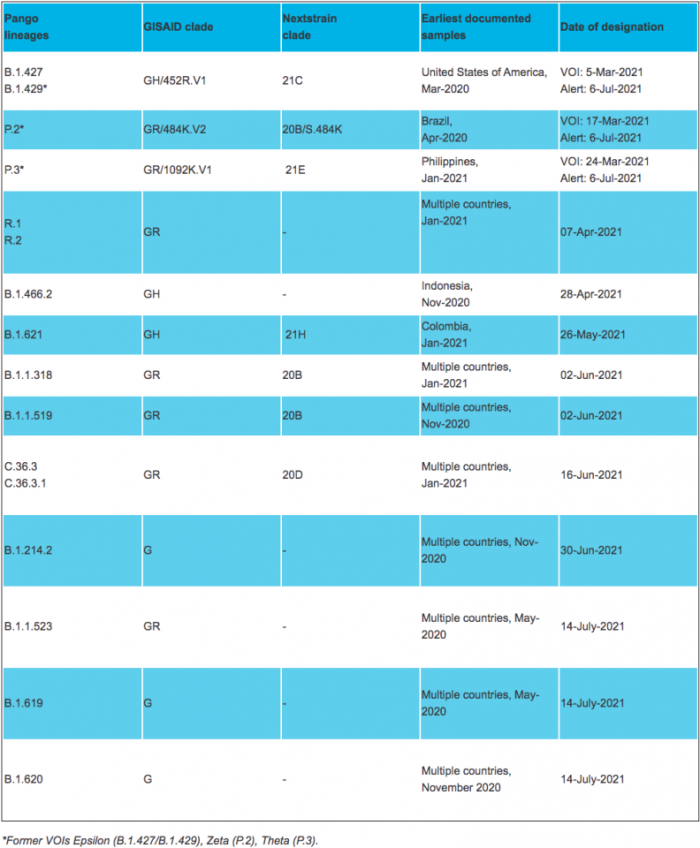 The next level of classification is “Variants of Concern” (VOI). These variants have known genetic changes that affect the characteristics of the virus, and they have produced important community clusters in several places. Only when a variant is classified as a VOI will it be marked with the characters of the Greek alphabet. There are currently four VOIs designated by the WHO.

The last level is “Variants of Concern” (VOC). VOC is a variant that has been shown to have a significant increase in virulence or disease severity. So far, there are four official VOCs, which are mainly defined in terms of their increased spread. A variant can be classified as a VOC without significant spread. If there is evidence that a new variant can evade vaccines or current treatments, it will be classified as a VOC.

See also  Nasal polyposis affects 2-4% of population, at the start of the information campaign

Although there are currently eight official VOIs/VOCs, there are also three variants with Greek alphabet labels, which have recently been reclassified as alarm titles. Epsilon, Zeta, and Theta were previously classified as VOIs, but were then downgraded by one name as more epidemiological evidence was collected.

The WHO said that the previous VOIs/VOCs will temporarily retain their previous titles while monitoring them. Therefore Epsilon, Zeta, and Theta still hold these tags, which means that 11 of the 24 characters in the Greek alphabet are currently used to designate the SARS-CoV-2 variant.

Most governments around the world generally accept the WHO label, although some regions do have their own variant levels. For example, in the United States, the Centers for Disease Control and Prevention (CDC) follows a similar designation to the WHO and has its own VOI and VOC categories.

However, the CDC does propose a higher level of classification of variants than VOC, called the severe consequence variant (VOHC). It basically covers variants where there is clear evidence that the vaccine’s effectiveness is significantly reduced, or variants where serious clinical disease appears. The good news is that no SARS-CoV-2 variant has been included in this designated scope.

Lambda is a variant that was recently included in the VOI category by the World Health Organization. In June 2021, after significant transmission was detected in Peru in the past few months, it was designated as a “variant of concern” (VOC).

cnBetaCOVID-19 variants: What is after Delta and how are the new variant strains named?IT and health
0 comment
0
FacebookTwitterEmail
previous post

The 11th Congress of the Communist Party of...

Ciro Grillo and the three friends sent for...

The Presidium of the 14th Party Congress of...

The dive of Jhalak (Photo) – International