Qatar: the country of falconers between art and sport

But let’s get back on the road, where the sinuous joints of the signs draw the guidelines for the futuristic stadiums, 12, which will host the world competition, which the emirs have strongly wanted to internationally relaunch their kingdom. They are all amazing, but the most striking are the oyster-shaped Al-Khor, or the one that recalls the Al-Bayt Bedouin tents. The car continues towards downtown while the street lamps on the edge amaze with their elongated silhouette of palm branches, worthy of the most noble Parisian lampposts. But the surprise of Doha is not limited to such sporting daring either. Indeed it raises.

The city center with the “Manahattan” model skyscrapers is always on the horizon, in this small country that enjoys its capital, but a detour must be made, and it is an obligation, to the Qatar Olympic and Sports Museum which is located at the Khalifa International Stadium. Here for sport, every sport is the apotheosis. The museum is an incredible assortment of interactive exhibits. Its rooms, and the one with the Olympic torches from all continents is dreamlike. The Hall of Athletes is a celebration of sporting heroes from around the world. The photos of Nadia Comăneci and Muhammad Ali with boxing gloves on all: they are a nostalgic dive into the memory of the greatest champions of all time. Nothing better to tell about sport. Among the sections that “A Global History of Sport” is a journey through the history of sport in the world, from antiquity to modern times. The gallery includes nearly 100 objects and reproductions, ranging from the 8th century BC to the early 20th century, accompanied by interactive graphic, audiovisual and digital elements.

Another unmissable stop is Mathaf. At the entrance the portrait of the sovereigns by Yan Pei-Ming That of Sheikka Mozah bint Nasser Al Missened of Qatar by far the most beautiful of the many who meet in the country, who celebrates and loves her above all. It is she, with her beauty and her charm, but above all her human gifts and refined taste, one of the true inspirers of the country’s rebirth. Her portrait is the pearl of this permanent collection, the largest in the world of modern and contemporary Arab art. The collection, selected thanks to Sheikha Al Mayassa bint Hamad Al Thani, includes 9,000 works ranging from 1890 to today, supported by a large amount of archival materials documenting Arab artists and works of art, in a cultural union exotic that brings together landmark artists and key works from the Arab world, the Middle East and other regions that are historically linked to Qatar and the Arabian Peninsula. Different themes regarding aesthetics and policies related to changes and progress within multiple modernities and history related to art and society: rise of nation states, colonial struggles and post-independence reconstruction projects; the development and influence of the oil industry; the birth of new urban centers and cities; and aspirations for progress in a global, hyper-digitized and online era. 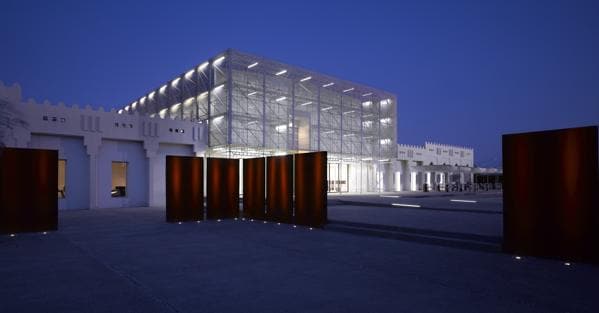 Many of these works address the movement of human civilization through rapidly evolving historical models. For example, the paintings and sculptures of Mahmoud Mokhtar, Hafidh Droubi and Jawad Selim create new visual trends inspired by ancient civilizations. The works of Chaibia, Inji Efflatoun, Paul Guiragossian, Faiq Hassan and Issa Saqer are portraits of the company, while the works of Seif Wanly, Abdullah al-Muharraqi and Hamed Owais depict social and industrial progress. Traditional signs, crafts and calligraphy are taken up by Ahmed Cherkaoui, Chaouki Choukini and Parviz Tanavoli. Abstract geometric shapes, as well as architecture, science and technology, are active in the work of Saloua Raouda Choucair, Jilali Gharbaoui and Mohamed Melehi. Hassan Sharif, Faraj Daham and Yousef Ahmad use natural materials, found objects and local languages ​​to make strong statements about the changing economic and ecological environment of the UAE and Qatar. The political and artistic positions of Farid Belkahia, Ibrahim El Salahi and Hossein Zenderoudi contribute to the reinvention of visual languages ​​that break Eurocentric canons. The contemporary conceptual works of Manal AlDowayan, Hayv Kahraman and Wael Shawky question historical narratives and question freedom struggles.

And then, at the end of the long strip of asphalt that leads from the airport to the capital, here is always and finally Doha: turn around and find it everywhere with its swaying skyline of lights that are reflected on the bay of the pearly sea dominating the landscape.

The tropical depression in the South China Sea will affect the high temperature weather in southern China, Xinjiang, Huanghuai, Jianghan and other places – Teller Report