Hundreds of flights canceled throughout Italy (100 only in Fiumicino). The (provisional) balance sheet of a difficult Sunday ended with the air transport strike proclaimed by the ENAV flight controllers and the staff of the low cost airlines Ryanair, Malta Air, Crewlink, EasyJet and Volotea. Affected by the strike of the flight controllers was also Ita Airways which proceeded with the cancellation of 122 flights, both national and international. The company has activated an extraordinary plan to limit the inconvenience of passengers, re-booking the largest possible number of travelers involved in cancellations on the first available flights: 50% will be able to fly today. Ita Airways has invited all travelers who have purchased a ticket for today to check the status of their flight, before going to the airport.

Data from Turin, Bari and Rome and Bologna

The first inconveniences were felt since the late morning: at 12, the flights canceled at Turin Caselle airport were already 20. Ten departing, the first of which was scheduled at 13.45 with destination Seville, and then Barcelona, ​​Bari, Valencia, Lamezia Terme, Alghero, again Barcelona, ​​Cagliari, Catania and Rome, the latter at 7.15 pm. Also canceled 10 incoming flights, from the same cities and from the island of Corfu. The flights canceled at the Turin airport are Ryanair, Wizz Air, Vueling and Ita. While at the Bari airport in the early hours of the turmoil, 37 flights were canceled between arrivals and departures. According to what was reported by the Aeroporti di Puglia website, another 26 flights, again between arrivals and departures, had been canceled in Brindisi. While in Rome Fiumicino the canceled flights, almost exclusively on internal or European routes, were about fifty, a figure that has risen to a hundred with the passing of the hours. In Bologna, too, there were about forty flights canceled at Guglielmo Marconi airport: twenty departing and the same number arriving. The Bologna airport in these days is affected by an important influx of passengers and the inconveniences aggravated by the continuous breakdowns of the People mover, the shuttle that connects the airport with the railway station.

See also  Rape in the massage center, a 28-year-old arrested

The deserted terminal of Linate

Over 80 flights canceled at Linate and Malpensa

During the strike at Linate, the billboard in the afternoon (at 2.20 pm) showed dozens of canceled flights. The airport and the parking lots in the departures area were semi-deserted: many passengers gave up on showing up after learning of the strike day. From airport sources it is learned that airlines have provided to inform passengers in advance by repositioning them on other flights. A first reconnaissance showed 55 canceled flights (23 departing and 22 arriving). 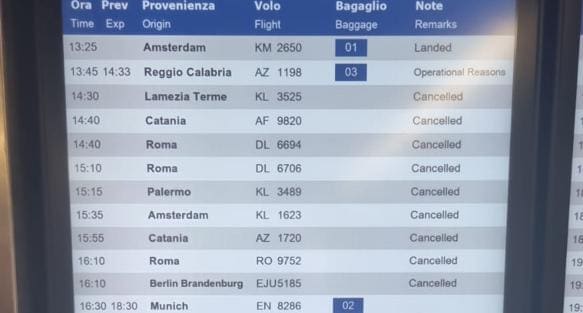 The arrivals board at Linate airport

Figures similar to Malpensa, where there were over 25 cancellations. On the other hand, no inconvenience was caused at the Milanese airports by the agitation of the private security staff, regularly on duty and present at the gates as we were able to verify directly.

The security officers of the airports are also on strike

At the same time as the work stoppages of ENAV staff and airlines, in fact, even the staff of the airport security and security services crossed their arms. The protest, concomitant with that of air traffic operators, is part of the #ContrattoInSicurezza mobilization organized by the trade unions Filcams Cgil, Fisascat Cisl and Uiltucs, to solicit the release of the negotiations for the renewal of the national labor contract applied to over 100 thousand workers in the sector, expired for 7 years. A day of strike that followed the initiative of last May 2 when thousands marched through the streets of Rome at the national demonstration organized by the trade unions against the stop of negotiations for the renewal of the CCNL, after the failed attempt to reconcile with the associations sector entrepreneurs Assiv, Univ, Anivip, LegaCoop Produzione e Servizi, Agci Servizi e Lavoro, unavailable to find the square on the wage increase.

USA World Cup, the challenge has started between athletes who have grown up over the years Covid

Is it better to train in the morning or in the evening? It depends on the goals

Deer devastate the fields, off to early hunting

The All-China Federation of Industry and Commerce, the...

Grasp the work of drought prevention and drought...