Original title: The film “Hello, Beijing” was shortlisted for the 5th Moscow Independent Film Festival to represent China to compete for the best film

The 5th Moscow Independent Film Festival will be held from January 27th to 28th. The organizing committee recently announced the list of shortlisted films for the main competition unit. A total of 25 films from different countries were shortlisted. The film “Hello, Beijing”, as the only Chinese film shortlisted in the main competition unit of the film festival, will soon compete fiercely with 24 other outstanding films.

“Hello, Beijing”, as the first cinema film directed by Cao Qianqian, can be regarded as the most anticipated warm-realistic film of the year. The director uses the most realistic lens to present the most simple life, show the most touching power, and tell the warm inspirational and touching story of the struggling life of the Beipiao family. The film is based on three small characters: middle-aged entrepreneurs, couriers, and young singers who have different experiences in Beijing. They are divided into three life stages: the confusion of teenagers, the bottleneck of youth, and the crisis of middle age. Warm and cold. It reflects every one of you, me, and him who insists on dreams and works hard on and off the screen. Director Cao Qianqian used the lens to depict for us that the strugglers in the adversity of life stick to their original aspirations, fly against the wind, gather the power of their dreams, and integrate youth, blood, sweat and passion into every bit of struggle, on the road to realizing their dreams Work hard to move forward and pursue the wonderful chapters of life with persistence and stubbornness. The film has recently been officially announced to be scheduled for April 30, and the finalized poster and the finalized preview have been released, causing heated discussions on the Internet. 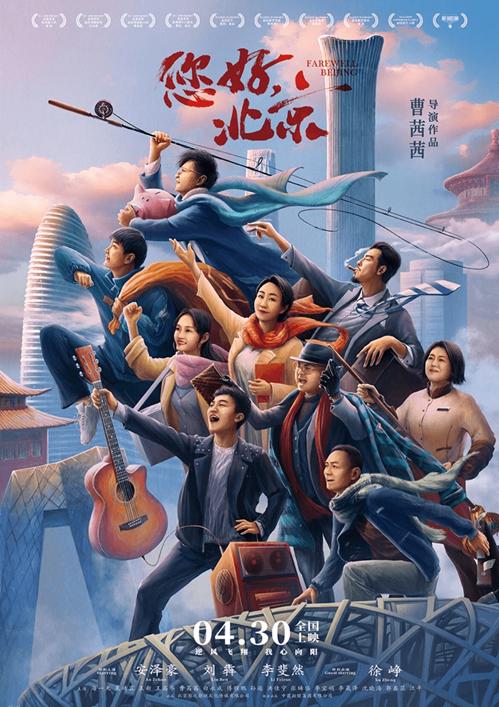 Previously, the film “Hello, Beijing” won three Golden Lotus trophies at the 13th Macau International Film Festival, including the Best Director Newcomer Award, Best Supporting Actor and Outstanding Newcomer Award, becoming the biggest winner of the night. It has also received wide acclaim internationally, and has won 11 international awards including the Outstanding Film Award at the 9th New Zealand Asia-Pacific Film Festival. The quality of the film has been greatly recognized by the industry.

The film “Hello, Beijing” has a gorgeous cast, including An Zehao, Bai Yongcheng, Wang Qianhua, Shen Xiaohai, Fu Chengpeng, Wang Xin, Sun Xun, Li Shengze, and several outstanding graduates of the Shanghai Opera. The strong joining of Guo Jinglin and Zhang Xilin can be said to be a dream come true for the students of the opera. They will meet again to create this good work with laughter and tears and affectionate interpretation.

The production team even invited Kwong Chi-liang, who won the Best Editing at the Hong Kong Film Awards 8 times for his classic films such as “Cold War”, “Eavesdropping” and “Chongqing Forest”, and won the 19th Hong Kong Film Gold Award for “Burst Detective”. Liao Jiawen, who won the Best Sound Effects Award, and Huang Haoshen, who was the colorist and dimmer of the films “Sister Peach” and “Chasing the Dragon II”, mastered the visual effects, and the production team has a strong lineup.

With the double insurance of award-winning film festivals and senior film teams, what kind of surprises the movie “Hello, Beijing” will bring to you in 2022, so stay tuned.

“Police Honor” focuses on the various forms of...

The game that made you press countless keyboards...

Design according to Audi: the regeneration of materials...

When the forest is trendy