Home News After Shanghai “evacuated overseas Chinese” from Hainan, let them be in public convenience in the bus | go to the toilet | Shanghai epidemic prevention and chaos | forced isolation
News

After Shanghai “evacuated overseas Chinese” from Hainan, let them be in public convenience in the bus | go to the toilet | Shanghai epidemic prevention and chaos | forced isolation

[NTD, Beijing time, August 13, 2022]Hainan’s closure of the city to “harvest” tourists aroused public outrage, and many governments took the opportunity to hype charter flights to “evacuate overseas Chinese” to improve their “image”. However, after some Shanghai tourists withdrew, they were forcibly taken to public rental housing for isolation, and they were not allowed to go to the toilet on the road.

On August 12, an online video showed that people who returned to Shanghai from a chartered flight from Haikou were taken by bus to public rental housing for compulsory isolation. Passengers on the road asked to stop and use the toilet, but the epidemic prevention staff brought a bucket and placed it at the door of the car, asking the male and female passengers on the car to solve it on the spot.

Video shows the move sparking outrage. A man asked the epidemic prevention personnel to “come up and demonstrate”, and another female passenger asked, “What do you think of us? Be a pig?” Later, a male passenger at the door kicked the bucket out, and the epidemic prevention personnel were also arrested. Infuriated, he immediately told the driver to close the door.

Officials in Shanghai, Xi’an and other places hyped up charter flights to “humanely evacuate overseas Chinese” from Hainan, stepping on the Hainan authorities to establish their “brilliant image”. As a result, the withdrawn tourists immediately resumed the same treatment as pigs.
This is a group of people who were evacuated to Shanghai from a chartered flight from Haikou. They were immediately taken to the public rental housing for isolation at their own expense. They had to go to the toilet on the way. As a result, Dabai refused to get off the bus and gave them a bucket, asking the male and female passengers to solve it on the spot in public! ! ! pic.twitter.com/Qco0TR3Nhp

Some passengers on the bus broke the news online that there were a total of 120 Shanghai tourists who were evacuated from Haikou, including the elderly and pregnant women. They did nucleic acid tests in Haikou for many days in a row, and finally returned to Shanghai after confirming negative results. As a result, these “low-risk personnel” were sent to the public rental house on Xiangda Road, Qingpu District for isolation, which was originally a place to isolate positive and close contacts. . These returnees are unacceptable.

See also  Cousins ​​collided and killed on the A28, the driver sentenced to seven years

The revelation did not mention whether the quarantine was charged. However, pictures circulated on the Internet earlier showed that Shanghai required tourists withdrawing from Hainan to be quarantined for 3 days at their own expense. 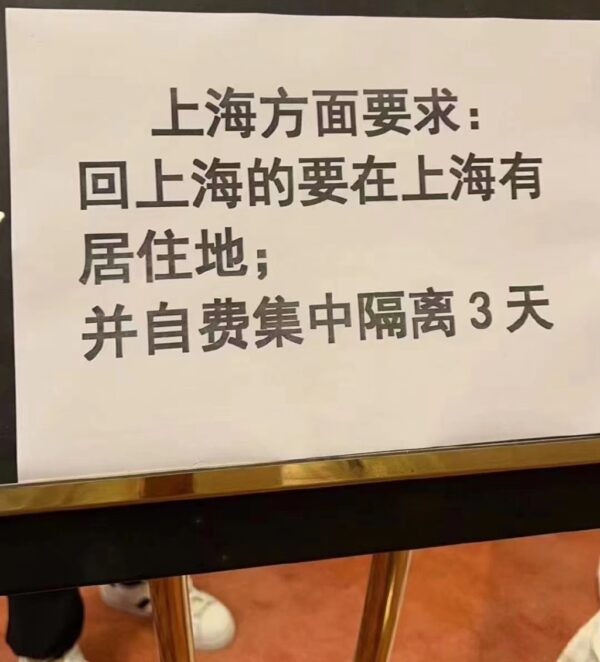 A few days ago, the closure of the city of Sanya in Hainan caused tens of thousands of tourists to be trapped, and local restaurants and hotels raised their prices on the ground, attracting public opinion encirclement and suppression. Foreign officials also took the opportunity to join in, criticizing Sanya to improve their “image”. It is reported on the Internet that officials in Nanjing, Shanghai, Xi’an and other places have arranged charter flights to “humanely evacuated” local tourists from Hainan, and promoted the official door-to-door sales of air tickets, arrangements for pick-up and so on.

Authorities in Shanghai and Xi’an have previously been notorious for their brutal lockdowns. This “bucket convenience” incident has brought back the “glorious image” created by Shanghai through “evacuation of overseas Chinese”.

Also reported on the same daymultiple videosIt shows that Shanghai Oriental Fisherman’s Wharf suddenly ordered a closure for 48 hours because of the discovery of close contacts in the shopping mall. The panicked crowd in the shopping mall broke through the blockade and escaped the gate. There was a stampede at the scene, and many people were subsequently arrested.

Trump investigated, a video shows armed supporters in front of the FBI headquarters in Arizona. Risks of violence, appeal to intelligence

Bills, a new Dl will be needed for...

20th National Congress of the Communist Party of...

The mystical and hippy Far West by Peter...

With the holiday approaching, consumption picks up and...

The city’s security work conference was held to...