Beijing time on August 8th, a number of CBA players finally chose to join the Bay Area Wing Loong due to dissatisfaction with contracts and transfers, which also attracted widespread attention in the Chinese basketball world.

Meng Xiangyu, a former Tianjin men’s basketball player, rebuked the CBA company and the Chinese Basketball Association for being unprofessional. 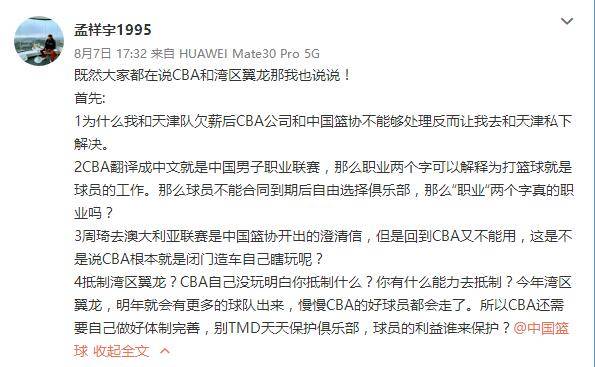 Since everyone is talking about CBA and Bay Area pterosaurs, I will also talk about it!

1 Why the CBA company and the Chinese Basketball Association could not deal with the arrears of wages between me and the Tianjin team and asked me to resolve it privately with Tianjin.

3 Zhou Qi’s trip to the Australian League is a clarification letter from the Chinese Basketball Association, but it can’t be used when he returns to the CBA. Does this mean that the CBA is simply playing around behind closed doors?

4 Boycott the Bay Area pterosaurs? CBA itself didn’t understand what you were resisting? What ability do you have to resist? This year, the pterosaurs in the Bay Area will have more teams coming out next year, and gradually all the good players in the CBA will leave. Therefore, the CBA still needs to improve its own system. Don’t TMD protect the club every day. Who will protect the interests of the players?

Meng Xiangyu was born in Chaoyang, Liaoning in 1995. He is over 2.20 meters tall. He was selected for the Liaoning youth basketball team and the U15 national team. On average, he can contribute 21 points, 8.4 rebounds and 5.6 assists, becoming the core of the team’s offense and defense inside.

Although Meng Xiangyu didn’t have much opportunity to perform in the CBA, he began to scold the CBA Tianjin Men’s Basketball Team for arrears of wages, and successively broke the news that there were many shady stories in the CBA, including the need for 100,000 yuan to enter the CBA echelon, and Wang Shipeng went south to Guangdong because he could not afford 50,000 yuan. and many more.