The aroma of coffee, Shanghai innovation is everywhere – Xinhua English.news.cn

Open the tent and you can drink the ice cream delivered by the drone. Would you like to try it? This morning, over the World Expo Cultural Park, a Meituan drone took off with Manner iced coffee and arrived at the tent area a few minutes later, delivering a “heat-relieving artifact” to the campers.

The aroma of coffee knows Shanghai, and innovation is everywhere. As one of the benchmark events of the 3rd Shanghai “May 5th Shopping Festival”, the 2022 Shanghai Coffee Culture Week with the theme of “Taste Shanghai, Live Up to Love” officially opened today. More than 100 series of activities, such as coffee consumption discounts, coffee culture fairs, coffee special districts, and coffee fragrances in Shanghai, will be launched one after another, which will accelerate the return of the vitality of Shanghai’s coffee industry, and make the coffee culture highlight an “open, innovative and inclusive” Shanghai. Urban character.

“Where the coffee drinkers are, Blue Bottle Coffee will open the store.” Blue Bottle Coffee, which is about to open its second store, uses this sentence to point out the key to Shanghai’s global lead in the number of cafes.

On August 5th, Blue Bottle Coffee’s Shanghai Jingan Kerry Center store will meet coffee lovers. Drawing on the structure of Shikumen Lane in Shanghai, and inspired by traditional Chinese roof tiles, the Jingan Kerry Center Store uses more than 13,000 hand-fired clay bricks, which are placed on the bar counter, stairwell wall and two walls one by one. The main floor space injects historical attributes into the modern atmosphere of the cafe. 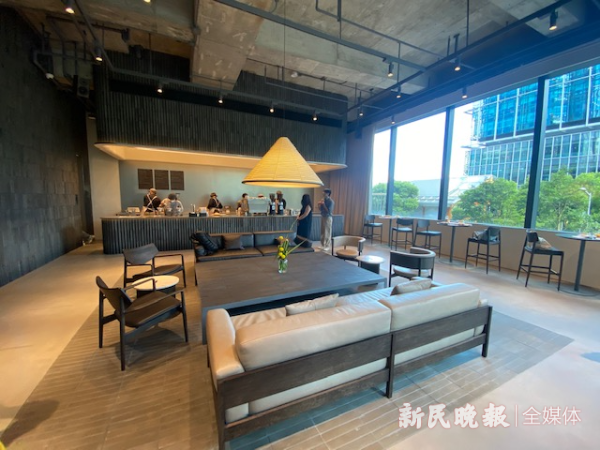 The inspiration of the roof tile also inspired the innovation of the product: the coffee tile Melaleuca, which is limited to the store, uses a crisp shape “tile”, accompanied by a round and rich Hayes Valley coffee cream. There are also limited edition coffee cocktails, smoked cold brew whisky and passion fruit cold brew liqueur, all of which bring comfort and comfort to the busy city.

“In the past few months, Blue Bottle has never stopped busy.” In February this year, it opened its first store in the mainland along the Suzhou River. In less than half a year, the second store chose Jing’an, which is rich in coffee culture.

When life returns to normal, the “rolled up” Shanghai coffee market has ushered in many new stores. Not only Blue Bottle, but also more personalized boutique coffee shops.In a few days, Fule Coffee opened in Yalong International Plaza is about to change. Founder Liu Houjun told reporters that the new store in the business district of Nanjing West Road has been renovated, and it is only necessary to debug the machine. In the past five years, the “Shanghai Grandpa” who pioneered “Chinese-style stewed coffee” has built his coffee shop from the ground floor to the ground floor. , to promote Chinese coffee culture.

There is also Treehouse Coffee on Mengzi Road, which is built around trees and serves the community; Shan Q Coffee on Ruijin Road is the hottest camping trend today; May café on Loushanguan Road is open in the morning and evening. The Japanese-style small wine coffee… Since June, there have been new stores in the Shanghai coffee industry, and the vitality of the coffee industry has accelerated.

Using the method of Chinese-style stewing in water and slow-cooking over low heat to complete coffee extraction, Liu Houjun’s “Chinese-style stewed coffee” subverts the existing cognition and makes imported coffee into a Chinese flavor. In Shanghai, an endless stream of innovative ideas “ignites” the aroma of coffee. Through the cups of new products, you can just see the vigorous vitality of Shanghai’s “first-time economy”, and you can feel the innovative spirit integrated into the spirit of the city.

See also  What does the United States intend to extortion of confidential data from many semiconductor companies? _Xinmin Current Affairs_Xinmin Network

In Fule Coffee Shop, there are two types of “stewed” coffee: the cold drink is called Wuji, and the hot drink is called Furong. Liu Houjun said that after the product was launched, the sales in the store had already surpassed the American style. If you look closely at the product catalog, you can also see Shanghai-style specialty coffees such as Longtang Milk Coffee, Mixiang Milk Coffee, Jiuxiang Milk Coffee, and Yogurt Coffee, and “Ala Xiaozao” is even more special. It contains dozens of different flavors. Only by doing your homework online in advance can you order the “hidden option”.

Photo courtesy of the interviewee

Liu Houjun said that a series of product innovations triggered by “Chinese-style stewed coffee” technology is the key to attracting young consumers. “Chinese coffee has a mild taste and is more in line with Chinese taste buds. On this basis, we have developed a series of new products and named them after Chinese famous flowers full of artistic conceptions, such as Hibiscus, Lily, Yingchun, Begonia and Magnolia. Next, we also We will continue to research and develop and gather ten famous flowers.”

Having traveled to cities around the world, Starbucks, the coffee chain brand, has a strong sense of “innovation”. Last year, during the Shanghai Coffee Culture Week, Starbucks launched a series of limited-edition products called “Salute to Shanghai”. Yellow wine, plum and coffee liquid collided with unique flavors. In the past two days, the summer limited whisky barrel brewed cold brew has been unveiled at Starbucks stores in Shanghai. This rare coffee with whisky rhythm and smoky oak flavor is still “Shanghai limited”.

The “fascination” with new products is also reflected in the power of action when buying coffee. Starbucks said that in just one month after its launch, the sales of Bingzhen Concentrate series has surpassed Bing American, becoming Starbucks’ first iced coffee category in the Chinese mainland market. This not only makes it feel the love of Chinese consumers for innovation, but also rejoices in the continuous expansion of the industry track.

With the rapid recovery and potential release of urban consumption in Shanghai, the coffee market is also showing a strong recovery capability. The Meituan report pointed out that in May this year, the order volume of Shanghai coffee stores increased by 163.9% month-on-month, and in June it increased by 5,273% month-on-month.

In the face of the booming coffee market, in addition to new products and new retail, new technologies are also developing rapidly. This morning, as a highlight of the Shanghai Coffee Culture Week, Meituan UAV and Manner launched a pop-up drone store in the camping area in Shanghai – Feida cafe, where you can make the coffee you just made in just a few minutes. Delivered to the door of the tent, adding to the fun and comfort of camping.

On the streets of Shanghai, you can also encounter a robot cafe around the corner, which uses a cool robotic arm to make a cup of freshly ground coffee for you. In the Xintiandi business district, soon after the COFE+ robot cafe appeared, it attracted many citizens to try this cup of coffee with a “sense of technology“.

Through the window of the cafe, the busy clerk could not be seen, only the coffee robot “sit” in it. Scan the code to order a cup of coffee, and the robotic arm will start to operate slowly, skillfully making a cup of iced Americano. Then the robotic arm sends the coffee to a circular area at the mouth of the cup, and it is finished in about 1 minute.

As the city with the most coffee shops in the world, Shanghai now has a new batch of “robot shop managers”.

I want to reveal

Xinmin.com news may not be reproduced without authorization

The Romance of the Qixi Festival in Florence Town is coming, come and start a heart-wrenching journey!_TOM News

iPhone 14 set for September?The performance of the...

Wall Street weak in start: The topics to...

Bona Films lands on A-shares at the daily...

Cryptocurrencies: ECB prepares rules for banks against the...