Home Business The new energy consumption is collectively strengthening, and the main return concept is the leader of the week!Battery recycling welcomes favorable policies, and the performance of 14 stocks increases rapidly
Business

The new energy consumption is collectively strengthening, and the main return concept is the leader of the week!Battery recycling welcomes favorable policies, and the performance of 14 stocks increases rapidly

(Original title: A-shares rose across the board, returning to 3,000 points! New energy consumption has collectively strengthened, and the main return concept is the leader in a week! Battery recycling welcomes favorable policies, and 14 stocks have achieved high performance)

On the news side, yesterday evening, BYD, the leader in new energy vehicles, released the October production and sales report. The company’s monthly output of new energy vehicles was 220,100 units; the sales volume was 217,800 units, a year-on-year increase of 144.7% and a record high. According to the estimated data of the China Passenger Car Association, Tesla’s monthly sales in China were 71,700 units, a year-on-year increase of 31.8%. From the perspective of the domestic market alone, BYD’s October sales were about three times that of Tesla’s China.

See also  The balance of the two financing companies rose slightly compared to the previous trading day, an increase of 3.459 billion yuan_Securities Times

Zeng Yuqun, chairman of CATL, once said that lithium resources are not the bottleneck of industrial development. At present, the proven lithium resource reserves can produce 160TWh lithium batteries, which can fully meet the global demand for power batteries and energy storage batteries. Most of the battery’s materials can be reused. After 2035, recycling materials from retired batteries could meet a significant portion of the market demand.

GF Securities said that in the past six months, the policy side has continued to be booming. On July 21, members of the party group of the Ministry of Industry and Information Technology stated at the “2022 World Power Battery Conference” that my country has initially established a power battery recycling system. Mainstream enterprises are currently put into production + under construction + planned production capacity totaling about 2.04 million tons / year. In the long run, recycled lithium, cobalt and nickel will effectively ensure the supply of metals in batteries and other links, and the future of the industry will be worry-free.

Securities Times·Databao counted 14 power battery recycling concept stocks whose net profit doubled year-on-year in the first three quarters. In terms of institutional attention, CATL has the largest number of rating agencies, with as many as 45; Tianci Materials has 18; Tianqi Lithium, Ganfeng Lithium, Long-term Lithium and Guoxuan Hi-Tech all have more than 10 rating agencies .

Among the concept stocks, CATL, NIO, Guotai Junan, etc. have jointly invested in battery asset companies, mainly for the full life cycle management of batteries; Ganfeng Lithium and Tianqi Lithium have also established subsidiaries one after another to lay out the lithium resource cycle track; BYD It has established more than 40 power battery recycling outlets around the world. 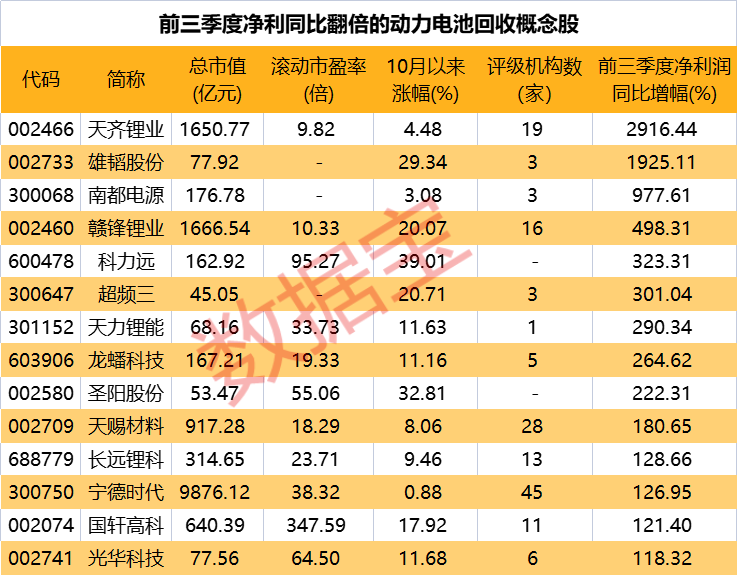 This week, the A-share market as a whole showed an upward trend. The Shanghai Composite Index rose 5.31%; the Shenzhen Component Index and the ChiNext Index both rose more than 7%. All the Shenwan industry indexes rose, with 20 industry indexes rising by more than 5%. The four major sectors of automobiles, food and beverages, social services, and commerce, trade and retail were among the top gainers, with weekly gains of more than 10%.

Excluding the new shares listed in the past month, the net outflow of China Software and Mindray Medical exceeded 1 billion yuan. As the concept of Xinchuang, which was popular in the early stage, has been extinguished, concept stocks have also been sold by funds one after another. China Software is a bull stock in Xinchuang concept, with a cumulative increase of nearly 70% in October. The company has been sold off at a high level recently, and the main force has had a net outflow for 7 consecutive days, with a cumulative amount of 1.607 billion yuan. The other two Xinchuang concept stocks, Jiuqi Software and ArcherMind, also recorded relatively high gains in the early stage, with the main net outflows both exceeding 400 million yuan.

In terms of net inflows, new energy and big consumption themes were mainly returned this week. BYD, Salt Lake, Ganfeng Lithium Industry, Ningde Times and other concept stocks topped the list in terms of net inflows; Guizhou Moutai, Wuliangye, Luzhou Laojiao and other liquor stocks also Get the main holdings. Shanxi Securities said that in the short term, the sentiment and fundamentals of the liquor sector have gradually bottomed out, and there may be regional and price differences in the future; in the medium and long term, consumption upgrades are still on the way, and industry concentration still has a lot of room for improvement. 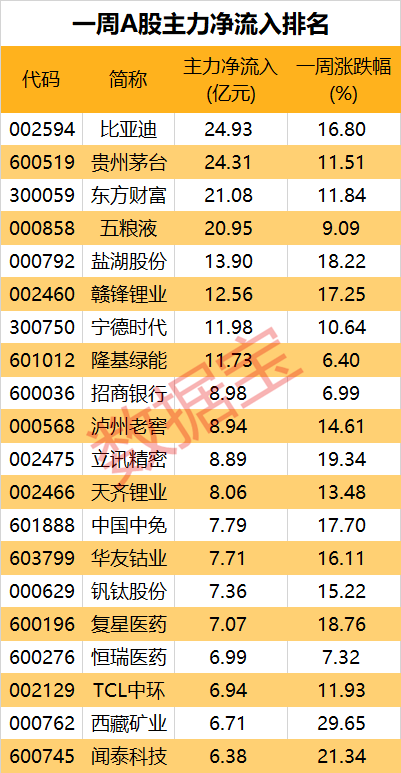 Statement: Securities Times strives for true and accurate information. The content mentioned in the article is for reference only and does not constitute substantive investment advice. Operational risks are based on this.

“Be Your Own Light” was successfully completed by Liu Tao, Qin Hailu, Liu Yuning, Chai Biyun and chasing the light jqknews

Rinascente returns to 2019 levels a year earlier than expected