Home News Find the cause of the loud noise in Kaifeng?It is said that there are fighter jets chasing over Henan and Anhui (Photos) Shandong | Fuyang |
News

Find the cause of the loud noise in Kaifeng?It is said that there are fighter jets chasing over Henan and Anhui (Photos) Shandong | Fuyang |

It is reported on the Internet that “fighter planes fired, three fighter planes, one of which fired a missile” recently over Kaifeng, Henan Province, and the “loud noise” in Kaifeng may be the explosion sound of the plane crashing. (Image source: Video screenshot)
See Chinese websites prohibit the establishment of mirror websites. Return to the genuine Chinese website.

[See China October 26, 2022 News](See a comprehensive report by Chinese reporter Li Muzi) Recently, the mainlandAnhui、Henan、ShandongThere are many “bang“It was rumored, it was reported on the Internet on October 26, and it was over Kaifeng, Henan”fighterFire, three fighter jets, one of them fired a missile”,KaifengThe loud noise in the city, “maybe the plane crashedexplodeThen a large number of fire trucks and police vehicles rushed to the explosion site.” However, the news cannot be verified at present.
See Chinese websites prohibit the establishment of mirror websites. Return to the genuine Chinese website.

October 24 and 25, AnhuiFuyangThere was a series of loud noises, and officials said they were investigating the cause. On the evening of October 25, loud noises were heard in a large area in Kaifeng, Henan Province. Some people said that “the circle of friends has exploded.” Some netizens said that there were also loud noises in Weifang, Shandong and Huizhou, Guangdong. Many netizens thought it was the sound of a large fighter jet, and the official response from Kaifeng City said that it had not received a safety accident report at that time.

On October 26, a number of related videos suspected of “loud noise” occurred in many places in the mainland flowed out, and some netizens said that “the Douyin upload is crazy”.

Several videos circulated on the Internet showed that the time was at 5:03 pm on October 25, and there was a flying object “rising vertically from the ground”. In the video clip, there is one plane in the sky, two planes at times, and one plane is chasing another plane. But netizens said it was a fighter jet.

The netizen “Bai 7” who posted the video said: “Big bang, I know that there are 4 provinces of Henan, Anhui, Shandong and Hunan. It is said that Taiyuan also has aircraft (missiles) passing by. On the 25th, there should be no new fighter jets to go to freedom in this era. Intercepted on October 25, 2022”, “Kaifeng City also made loud noises and explosions, and the place of explosion has not been found yet, but a lot of fire trucks were dispatched, October 25, 2022”.

See also  At least 6 people killed and injured in a big explosion in a residential building in Changzhou, Jiangsu | Gas | Epoch Times

There are subtitles in the video: “The sky is too high for the fighter exercise. The fighter planes can be seen firing on the scene. Three fighter planes, one of which has launched a missile. The sound is so loud that the explosion is so high that the houses on the ground are moving.” In the video, no A small number of people looked into the sky to discuss, and a man said: “A serious fighter jet is called a fighter jet.”

Loud currently knows that there are 4 provinces, Henan, Anhui, Shandong, and Hunan. It is said that Taiyuan also has aircraft (missiles) passing through the video. The dots are indoor reflections. Don’t pay attention to the two skylines. There are three sections of this video.
The meeting place I did not continue to trace the time yesterday
On the 25th, there should be no new fighter jets to go to freedom 😂
October 25, 2022 Intercept pic.twitter.com/tufaPXyNVz

There were also loud noises and explosions in Kaifeng City. The place of the explosion has not yet been found, but a lot of fire trucks have been dispatched.
October 25, 2022 pic.twitter.com/pBDrTNQvy3

Sonic explosion?Zhumadian in Henan and Fuyang in Anhui
There are three video clips from morning to night
October 24, 2022 (Two) Fighter pic.twitter.com/QAVBLMIWRK

Sonic explosion?Zhumadian in Henan and Fuyang in Anhui
There are three video clips from morning to night
October 24, 2022 (Wednesday) right? pic.twitter.com/T9IqS5nizs

On October 26, netizen “Xie Wanjun Wanjun Xie” posted a video saying: “On October 24, three military planes fought in the skies over Kaifeng, and one plane was shot down. On the night of October 25, there was a loud noise in Kaifeng city, it may be a plane The explosion of the crash, followed by a large number of fire trucks and police vehicles rushed to the explosion site and surrounded the explosion area. Has there been a civil war?”

In the video, a woman said: “I don’t know what’s going on in the community. There was a loud explosion just now. All the houses were shaking. Many places were said to be shaking. The place looked like a fire, and I couldn’t see it clearly.” The man said that there was a “big fire” in that part of the plane, and the ambulance crew went.

On October 24, three military planes scuffled over Kaifeng, and one plane was shot down. On the night of October 25th, a loud noise occurred in Kaifeng City, which may be the sound of an explosion from a crashed plane. Then a large number of fire trucks and police vehicles rushed to the explosion site and surrounded the explosion area. Has civil war broke out? (!) pic.twitter.com/DdnPyEdqYw

On October 26, in the “Yingzhou Group Chat” in Fuyang City, Anhui Province, the netizen “Moving Xi Ge” said: “I chased it from Henan to Anhui and shot it down.” Netizen “Dream Po Mouse Peeping Lamp” said: “I heard from the military that it was a UFO, which has been shot down. Only the remaining fragments were found, and no human life was found for the time being.”

Some netizens also said: “It sounded once yesterday, did it sound once today, did you come back for revenge today?”, “Is there such a thing? There is a video of two planes flying and chasing in the sky, and I thought it was an exercise”, “I seem to have heard that, There was a cannon fire”, “Just now I heard a loud noise, louder than last night.” 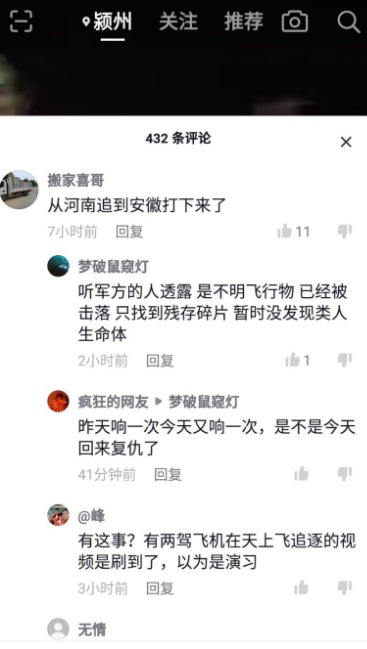 The content of the group chat in Yingzhou, Fuyang City, Anhui Province, “has been caught from Henan to Anhui”. (Image source: Internet screenshot) 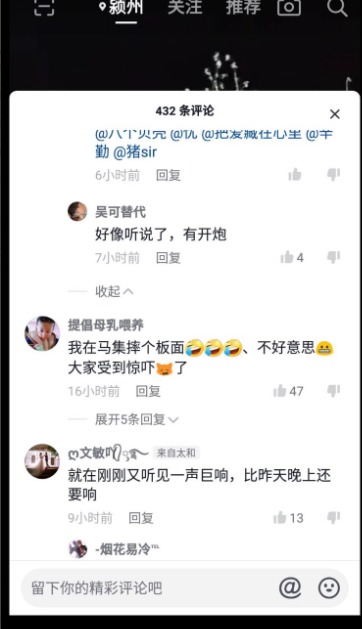 The content of the group chat in Yingzhou, Fuyang City, Anhui Province “seems to be heard, and there is a cannonball”. (Image source: Internet screenshot)

According to Jimu News, on the evening of October 24 and the morning of October 25, residents in many places in Fuyang, Anhui heard two loud noises, and some residents thought an earthquake had occurred. The Fuyang Seismological Bureau said that there was no natural earthquake on the evening of the 24th. For the loud noise on the morning of the 25th, the relevant departments in Fuyang said they were investigating the cause.

On October 25, a resident of Shuangmiao Town, Taihe County, Fuyang, Anhui said that at about 6:30 p.m. on the 24th, he was playing with his mobile phone in the car when he suddenly heard a loud noise and the car vibrated. At first, I thought that my car was hit by someone else, but after getting out of the car, I found that there were no vehicles nearby, which should have been affected by the loud noise. Later, it was visible in the WeChat group, and even some WeChat friends in Jieshou City heard the loud noise.

A villager from Caosi Village, Zhaoji Township, Taihe County said that in addition to the loud noise at about 6:30 pm on the 24th, at 10 am on the 25th, he heard a loud noise again.

There are loud noises in many parts of the mainland, which have attracted much attention from the public. Some mainland netizens said: “Officially, you explain the reason for the loud noise!” Someone replied: “I have not figured out what’s going on with the official, how would you explain it? It’s hard for a strong man.” “No need to say more, it’s a thunderbolt from the blue in the legend.”

Banco Alimentare: “Synergies are needed to meet requests for help”

They investigate attack against soldiers in Guachené

Crisis, an opportunity to study

During the Spring Festival holiday, tourists from all...

They seize shipment of marijuana and capture two...

Farewell to Arsenal in the FA Cup: City...

‘Guitars of the soul’ the new by Maestro...

Mega work began that will prevent the transfer...