[EpochTimesSeptember192021](The Epoch Times reporter Luo Ya interviewed and reported) In the recent outbreak of the CCP virus (new crown pneumonia) in Fujian, not only schools became the hardest-hit areas, but also at least three hospitals and two community health service centers. After the outbreak of the epidemic, the clinic was closed, and another hospital closed the clinic as a designated treatment for the infected. The rapid momentum of this wave of epidemics caused great panic among the people.

According to the statistics released on the 18th by the National Health Commission of the Communist Party of China on the 19th, 43 newly diagnosed cases on the mainland were all in Fujian Province. Among them, Xiamen City accounted for 39 cases. Xiamen City has reported a total of 131 confirmed cases so far. In view of the fact that the CCP has always concealed the epidemic, the actual number of infections is much higher than the official figures.

According to “Yingzhou Evening News“, Xiamen Third Hospital issued a notice on September 18: Due to the epidemic, the hospital suspended general outpatient and emergency medical services. In order to avoid cross-infection, the hospital has opened up emergency rescue channels and set up a medicine clinic for patients with chronic diseases at the entrance of the hospital. The recovery time will be notified later.

On the same day, Xiang’an Hospital affiliated to Xiamen University also issued a notice: due to the epidemic, medical services in outpatient and fever clinics will be suspended from September 18th. The emergency department receives normal treatment, and the nucleic acid test only accepts citizens who hold the green code and have no abnormal symptoms. The outpatient recovery time will be notified separately.

On the 18th, the Community Health Service Center of Kaiyuan Street, Siming District, Xiamen also issued an announcement: The center will temporarily suspend the clinic from now on, and the recovery time will be notified separately.

On the same day, the Zhongshan Hospital affiliated to Xiamen University also issued an announcement stating that due to the needs of epidemic prevention and control, the hospital headquarters will implement closed management from now on, and the outpatient and emergency medical services will be suspended. The recovery time will be notified separately. 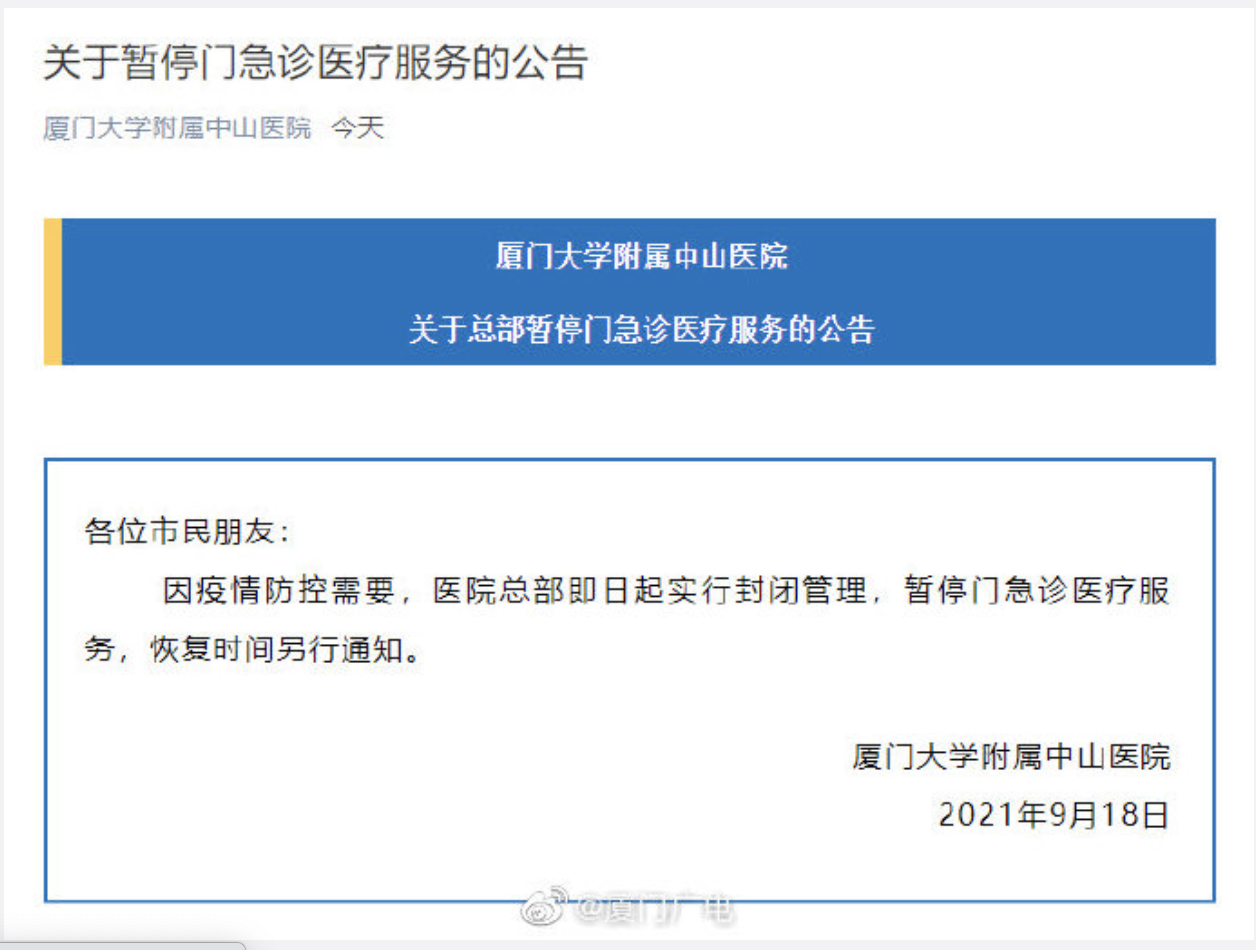 Previously, the First Affiliated Hospital of Xiamen University, because of the positive nucleic acid test of the outsourced workers who delivered to the outpatient department of the hospital, the hospital implemented closed management and stopped the outpatient and emergency department.

Another Xiamen Jimei Street Community Health Service Center also announced that all departments will be closed (including vaccination) from September 14th, and the opening time will be notified separately.

The hospital closed without mentioning the specific case situation

On the 19th, a reporter from The Epoch Times called the Xiang’an Hospital affiliated to Xiamen University. The medical staff on duty denied that patients with positive infections had stopped the diagnosis, saying that it was the reason why they were designated hospitals according to the requirements of higher authorities.

On the same day, the Epoch Times reporter called Xiamen Third Hospital. The operator told the third hospital that the specific infection situation was not clear. They just knew that the clinic was closed and they were responsible for making appointments. It was also unclear whether they could see the doctor by then.

Earlier, it was reported on the Internet that the Third Hospital had tested more than 200 positive. On September 14, the police dispelled the rumors and dealt with netizens who posted “rumors”, but did not mention the exact situation of the hospital. On the 18th, the hospital suddenly issued an announcement to close the clinic, but still did not mention the specific situation.

An insider disclosed that a nurse in the fever clinic of Zhongshan Hospital was positive. She recently went to the Department of Gastroenterology and Nuclear Medicine for an examination. She seemed to live in the Fanhua Building, and a building there was also sealed.

Due to the lack of transparency in the local epidemic information, netizens expressed dissatisfaction: “How many people the nurses have to contact? There are a lot of people in Zhongshan Hospital every day. This time it is really getting worse.” Explain by yourself in the comment area.” “You have to go through the netizens if you know what the situation is. I’m also drunk. Can’t you say why the control is blocked? Silent, concealed.”

The spread of the epidemic escalated public panic

Before announcing the closure of the clinic, Xiamen Zhongshan Hospital had sent a large number of medical staff to participate in nucleic acid tests in the local community on many occasions. At 7 am on the 14th, 138 medical staff were sent to 5 sampling points in the first batch of key epidemic areas (Siming District and Tongan District), including Jinqiao Community, Songbai High School, Songbai No. 2 Primary School, Baojia Yufeng Square, and Wushipu Metro Exit B1 is the hospital with the largest number of dispatches among all hospitals. 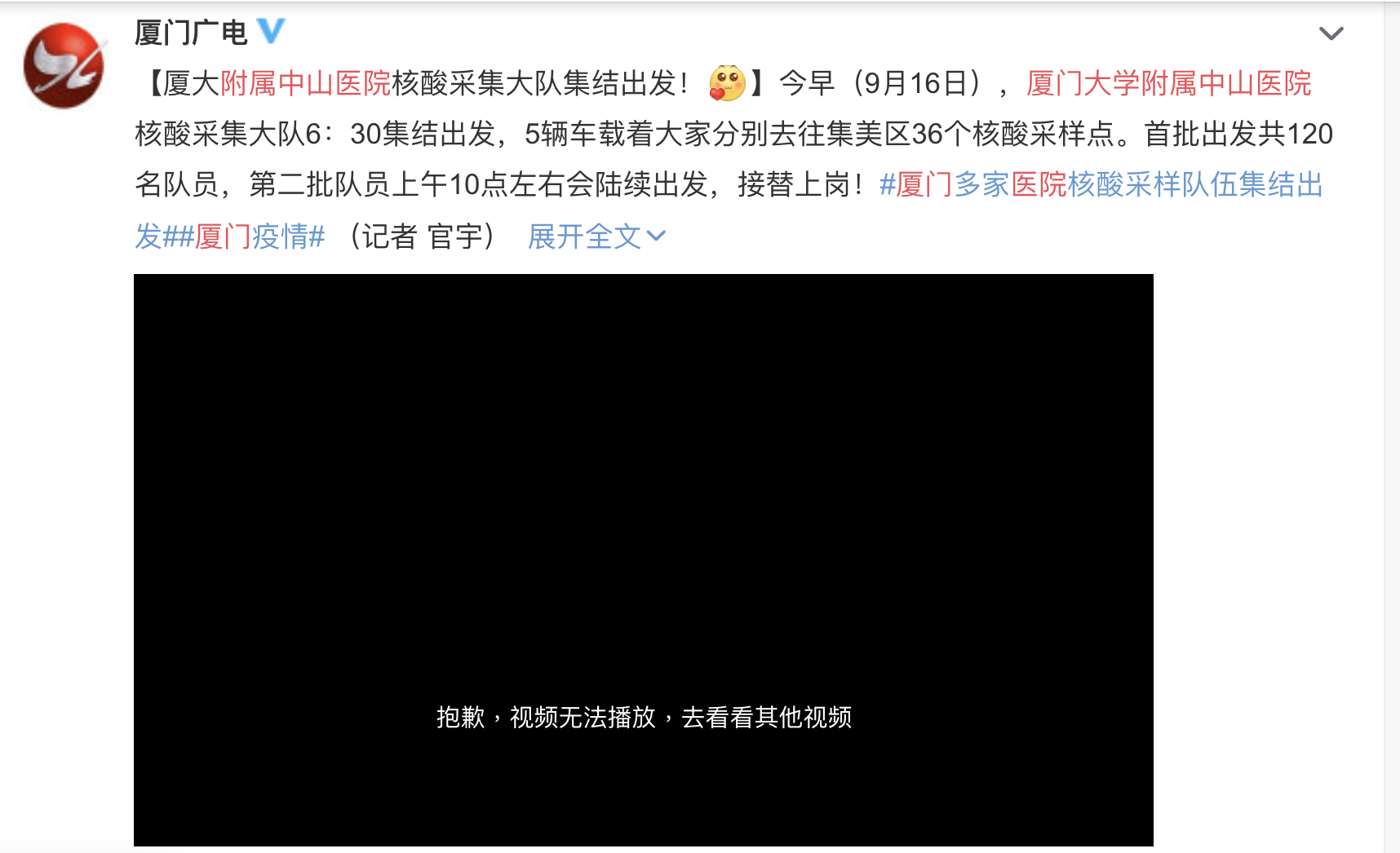 In response to the Epoch Times reporter’s consultation, the doctor on duty at Zhongshan Hospital said that this problem is not big because the medical staff who sampled are not necessarily infected, and they all wear protective clothing. But at the same time, he also said that citizens who do nucleic acid testing from them, “better not walk around, isolate yourself at home, and pay attention to the announcements.”

In addition, the Epoch Times reporter verified the information disclosed by the local people. Among them, the commercial office building Jinyuan Building and Mingfa Commercial Plaza were closed before September 17 due to positive cases, but the official did not mention it.

Some local people complained, “Speechless! Why is there no trace of activity in Xiamen’s case? It’s causing panic.”

On the 18th, some local netizens said that they saw that Zhongshan Hospital was also blocked in the morning. Now two major hospitals have been blocked, and there are more and more blocked points. The island’s Alex (pressure) Shanda makes people tremble! The nearest blockade is less than 1 kilometer from the subway station where I commute to and from get off work every day.

Some netizens also said, “Xiamen seems to be getting more and more serious. I had a nucleic acid test before I got up early and went to the company. I heard that the Zhongshan Hospital next door had “won the lottery”, and then I was told that I had become a close contact. Overnight, It seems that everything has begun to change.”

People: Tongan District has all suspended work and production

Mr. Li, a citizen of Tongan District, Xiamen, told The Epoch Times reporter that the entire Xiamen is now a medium-risk zone, and the community cannot visit each other. In the past, online shopping was directly delivered to home, but now it can only be placed at the gate of the community and take it by yourself.

“If it is a close contact of a confirmed case, the community will come to the door to put a seal. The community service staff will deliver food and then help take the garbage away. If the seal is torn off, the quarantine date will be recalculated,” he said.

The place where Mr. Li works is also in Tong’an District. They have all suspended work and production on the 17th. He also said that Xiamen Third Hospital is located in Tong’an District, and it is understandable that the problem has been closed.

According to the official confirmed case data, many people have been to the fever clinic of the Third Hospital in recent days.

He emphasized that in Xiamen, China, the vaccination rate is the highest, but this time the Delta variant strain vaccine has no effect, hoping to reduce severe illness.

“Fear and fear are certain. Xiamen is also very unlucky. In August, the captain of Xiamen Airlines passed the epidemic, which infected 6 people. After 14 days, it was released without infecting others. This time the epidemic from Putian, the epidemic spread. The outbreak is very fast. Now the most serious epidemic in the country is the Xiamen epidemic.” He said.

The First Affiliated Hospital of Xiamen University, the Affiliated Traditional Chinese Medicine Hospital of Xiamen University, and the Third Xiamen Hospital are major local hospitals. These hospitals have ceased their clinics one after another, so that the medical staff for nucleic acid testing is extremely scarce. Some local people reported that the sampling point they went to was a nucleic acid test in five communities, but they found that there were only six nucleic acid sampling personnel, so long queues, especially in the high-risk area, Tongan, could not guarantee one test point per community.

See also  He Liangmao: Meng Wanzhou returns to China to trade 1 for 4, Huawei is at the end

The Epoch Times reporter called Xiamen Xianyue Hospital and learned that because most of the medical staff went out to support nucleic acid testing and sampling, the hospital currently only keeps emergency doctors on duty and dispensing medicines, and all others are temporarily suspended. And this state will continue for a while. It’s not that the hospital stopped with a positive case. According to public information, the hospital is a third-level and B-level psychiatric hospital in Xiamen City.

According to news from the mainland Internet on the 18th, due to the epidemic, 15 toll stations in Fujian Province were fully closed and controlled, including 12 in Putian and 3 in Xiamen; 1 toll station in Xiamen was closed and controlled; and 3 national and provincial highways were closed to traffic. Control, including 2 in Quanzhou and 1 in Putian.

The various districts in Xiamen are also closed and controlled. For example, the road connecting Xiamen and Zhangzhou has been blocked by a large fence.

According to the news obtained by the mainland media CBN from the airline pipeline, since September 20th, airlines will cancel mainland domestic flights departing from Xiamen, and the recovery time will be notified separately according to the situation of Xiamen City’s epidemic prevention and control.

At the same time, the flight status of multiple airlines and multiple Xiamen outbound routes have all been cancelled on September 20.

In addition, on September 18, the Xiamen epidemic prevention and control department issued three announcements in a row. The measures are more stringent. All communities and villages have implemented closed-loop management. People are not allowed to move between each other. Foreigners cannot enter Xiamen, and local personnel cannot leave. Xiamen. The state-owned attractions of the Cultural Tourism Center will be officially closed from 15:00 on September 18.

The epidemic situation in Putian, Fujian continues. Since September 10, Fujian has reported a total of 335 local confirmed cases. The school epidemic infection in Putian City has increased to 72, including 15 in kindergartens and 50 in elementary school students.

The German general election enters the final week of the sprint stage, the competition among the parties is fierce

Eye examination, from the first months of life to adolescence: the stages of vision checks

Rare diseases, scientists scrapped: “Nobody will save the...

Dj Leo Gira, when music plays at the...

[News Highlights]Ye Ting, who reported the murder of...

A man killed during a dispute in Naples,...

Reclamation and safety of the nature ring in...

Mes, from the debt crisis to the pandemic:...

Bolzano, homeless immigrant found dead: it was the...