Tourists visit the Science Museum of the National Botanical Garden.

Life habit: Born in mixed deciduous broad-leaved and evergreen broad-leaved forests at an altitude of 1500-2200 meters 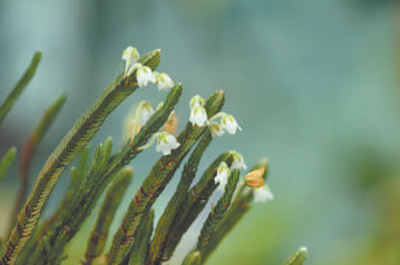 Life habit: born in shrubs or mat-like shrubs and grasslands at an altitude of 2900-3500 meters 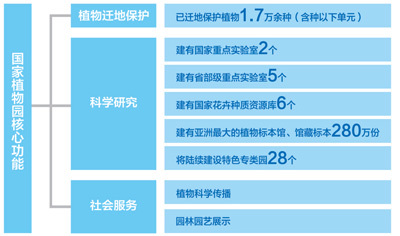 In the past year, with the vision of “building the world‘s plant resource ark, gathering the light of global plant science, and telling the story of Chinese plant culture”, the National Botanic Garden has made a lot of explorations in the protection of plant diversity, and has made solid progress. progress.

How does the plant with the largest single inflorescence in the world bloom and bear fruit? How tall is the tallest tree in China? How many kinds of plants are there in our country?

There is a plant that blooms every time it is a grand event in the world‘s botanical gardens. It is the giant konjac, one of the three flagship species of rare and endangered plants in the world.

It is extremely difficult for giant konjac to flower. It only blooms 3-4 times in its life, and each time it blooms for no more than 2 days. The number of artificial cultivation in the world is only more than 100 times. In July this year, the National Botanical Garden realized the group flowering of giant konjac, which is the first time in China and very rare in the world.

For this blooming moment, the exhibition greenhouse of the North Garden of the National Botanical Garden also specially held night activities. The reporter once saw in an on-site interview that when it blooms, the huge spathe of giant konjac turns deep purple and is accompanied by heat release. The changes in color and temperature attract many flies to pollinate it.

During the group flowering, the researchers also recorded the pollen production process of giant Amorphophallus male flowers, and announced it to the public for the first time. What’s exciting is that the mutual pollination of the giant konjac that bloomed in this group also made it the first time that the fruit of giant konjac was harvested in China.

“The group flowering and fruiting of giant konjac is of great significance.” Wei Yu, deputy director of the North Garden of the National Botanical Garden, introduced that this marks the first time in my country to realize the full life cycle cultivation of giant konjac from seed to seed. Rare and endangered plants have laid a solid foundation. “Researchers are studying how to hybridize giant konjac with other species of konjac that are of the same genus and have value for use, so as to breed new konjac varieties.” Wei Yu said.

The “biggest flower” blooms collectively. Where is the tallest tree in China and how tall is it?

Not long ago, the Chinese giant tree scientific expedition team composed of the Institute of Botany, Chinese Academy of Sciences and others released the exact height of the “China‘s tallest tree” Yunnan Huangguo fir: 83.4 meters; at the same time released a photo of the giant tree – in the photo This Yunnan Huangguo fir stands in the valley floodplain forest beside Gangrigabu, a tributary of the Zayu River.

“Giant tree photo” is not easy to come by. In May of this year, when the National Botanical Garden and the Institute of Botany of the Chinese Academy of Sciences Guo Ke’s research team conducted a vegetation survey on the giant tree community in Buzong Village, Shangchayu Town, Zayu County, Tibet, they found multiple giant trees with a height of more than 75 meters. Among them, a Yunnan Huangguo fir was measured by a drone, and its height reached 83.4 meters. This has also become an important achievement of the second national Qinghai-Tibet scientific research project.

From the ex situ protection of rare plants, to the arduous search in the mountains and dense forests, to the support of basic scientific research and scientific data – in the past year, the National Botanical Garden has “built the world‘s plant resource ark, gathering the light of global plant science” , Tell the story of Chinese plant culture” as the vision, and made efforts in various ways, and made a lot of explorations in the protection of plant diversity.

Conduct resource surveys, discover new species, and try our best to find out the family background of plants in our country

See also  The epidemic heats up to a two-year high, and the CCP's "dynamic clearing" fails | The epidemic rebounds on a large scale | The Chinese style and the virus coexist | Antonio Graceffo

The protection of plant diversity is inseparable from the support of basic scientific research and scientific data.

Where do scientific data come from? Guo Ke introduced that after the discovery of the Yunnan Huangguo fir this time, in the process of climbing, shooting, and collecting, the scientific research used the international “gold standard” for measuring giant trees – the direct tree climbing method, that is, manual climbing to At the top of the giant tree, after determining the highest treetop, lower the metal tape measure from the treetop to the ground to measure. According to the collection and survey of climbing trees, more than 50 species of higher plants were found on the tallest tree in China, including climbing plants, epiphytic plants, parasitic plants and other types, showing unique plant diversity.

Liu Bing, an associate researcher at the National Botanic Garden and the Institute of Botany, Chinese Academy of Sciences, said that scientists at the National Botanical Garden have also made important contributions to the discovery of new species. They discovered and described Gongshanjiao Panlan, Medog Phalaenopsis, Medog Open Arrow, etc. These species not only increase the plant diversity of China, but also may have important resource utilization value. It is understood that the National Botanical Garden has completed the background investigation of plant species, and has collected and preserved more than 17,000 species of plants (including units below species), including 786 endemic species in China, listed in the “National Key Protected Wild Plant List (2021)” There are 354 kinds of plants.

In May of this year, the 2022 edition of the “Catalogue of Biological Species in China” was released, and the part of the plant kingdom was mainly completed by the National Botanical Garden. According to Liu Bing, it is recorded in the catalog that there are 542 families, 4,480 genera, 46,725 species and infraspecific units of plant species in China, including 32,708 species of angiosperms, 291 species of gymnosperms, and 5,494 species of ferns and bryophytes—compared with the 2021 edition , 794 new species were added in the plant kingdom. In addition, this year, the National Botanical Garden also integrated relevant information on exotic plants in my country through big data analysis and other methods, and published the “List of Alien Plants in China“, which recorded a total of 14,710 groups of exotic plants in China in 283 families and 3,233 genera.

The function of ex situ protection has been continuously improved, and breakthroughs have been made in the protection of rare and endangered plants

There are only 250-300 wild plants of Emei Trough tongue, which is a very small number. It is a rare and endangered species and a very small population of wild plants. As an endemic species in the Mount Emei area of ​​China, it is only distributed in the middle and low mountains of this area, and grows on tree trunks in open forests at an altitude of 700-1000 meters. Emei trough tongue is a species discovered and named by Jin Xiaohua, a researcher at the National Botanical Garden and the Institute of Botany, Chinese Academy of Sciences. According to reports, at present, the two Emei grove tongues are being artificially pollinated during the flowering period, and they will be sown aseptically after the seeds are obtained.

Recently, the staff of the botanical garden rescued from the wild the equally rare Nujiang grouse and Alpine grouse, which belong to the same genus and have already started conservation work in the National Botanical Garden.

Lin Qinwen, a senior engineer at the National Botanical Garden and the Institute of Botany of the Chinese Academy of Sciences, said that as a national plant diversity protection base and a national plant strategic resource reserve center, in 2022, the National Botanical Garden has done a lot of work in the collection of characteristic living plants and ex situ protection of rare and endangered plants. A total of more than 1,000 types of plant materials such as wild native plants and greenhouse plants have been introduced and collected, including nearly 450 wild native plants, including many rare and endangered plants.

Advent letter from the Cuban Bishops’ Conference: Building a country of fraternity together – Vatican News Vatican

The investigation into animal suffering in Elon Musk’s Neuralink tests

El Huila will participate in the first National...

The sentence of alias Otoniel will be known...

Yopal taxi drivers will get up from the...

This earns a referee in Colombian professional soccer:...

Rights acquired in the pension

They are already training in UTP pools

District will receive technical assistance for the construction...

Another Huilense died in the United States