Original title: What to watch for the National Games? 50 Olympic champions report collectively, and the reorganization of the national team is also here

After the Tokyo Olympics, the sports festival continues. On September 15, Beijing time, the 14th National Games opened in Xi’an, Shaanxi.

At the same time, this National Games will also take on the important task of selecting talents for the Paris Olympic cycle-the National Games may be the starting point for many geniuses to be recognized in the future.

The emerging Olympic events such as break dancing will also be unveiled at this National Games. 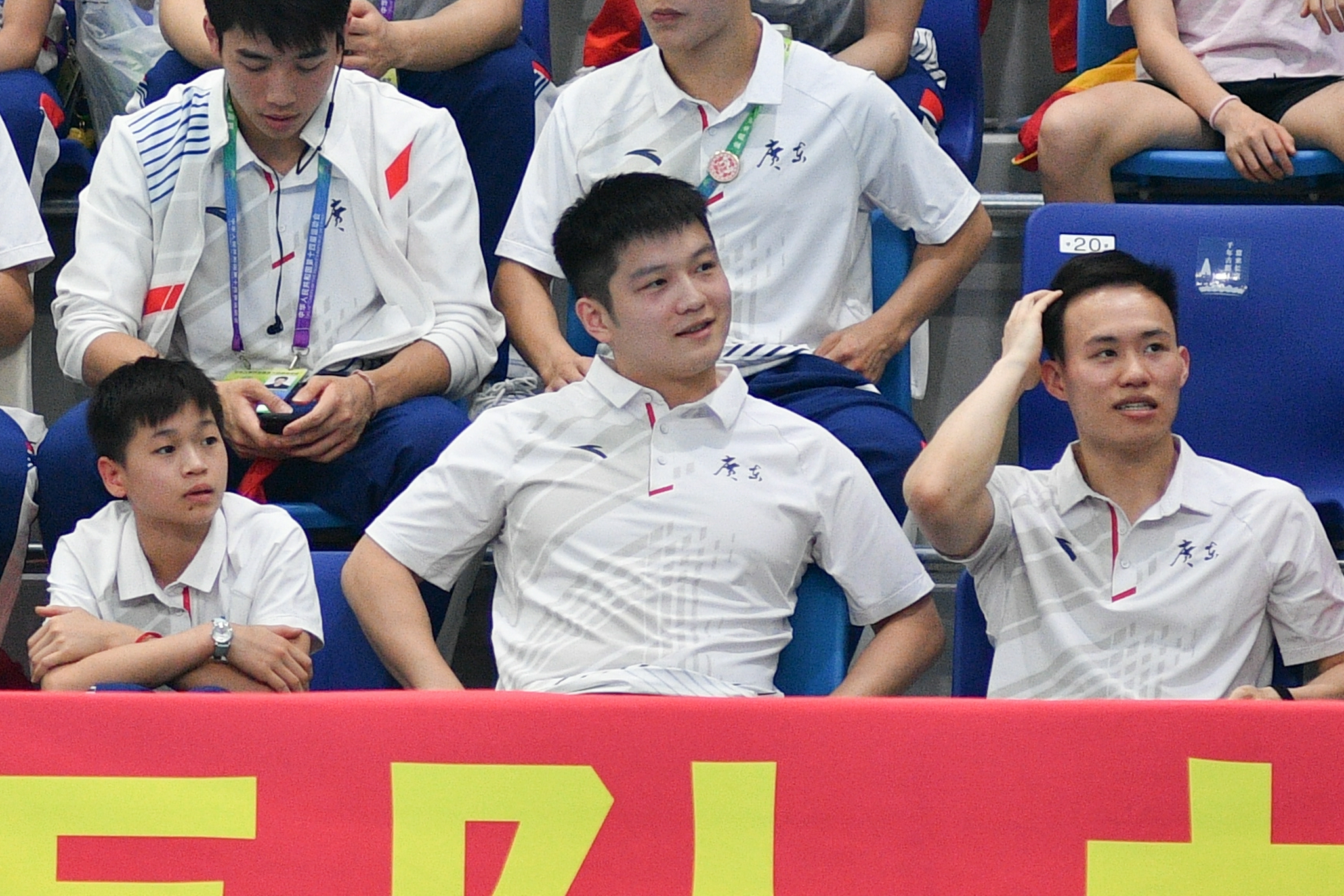 “I think the National Games is much harder to play than the Olympics.” This is what the women’s singles champion Chen Meng said in the live broadcast after returning to China.

Chen Meng’s complaint is exactly the current situation of the National Games-in China’s strong sports such as table tennis, diving, and weightlifting, the degree of “involution” is much higher than that of the Olympic Games.

In this National Games, 50 Tokyo Olympic champions and previous champions all gathered, the level of competition is absolutely “yyds”. In many projects where the championship has been decided, the competition process is also a “fairy fight”.

For example, in the women’s 10-meter platform final that ended before, a total of four Olympic champions and two world champions participated. Quan Hongchan, who used to be a great ride on the Olympic stage, did not surpass Chen Yuxi to win the championship until the fourth move, and Zhang Jiaqi, also an Olympic champion, failed to even stand on the podium. 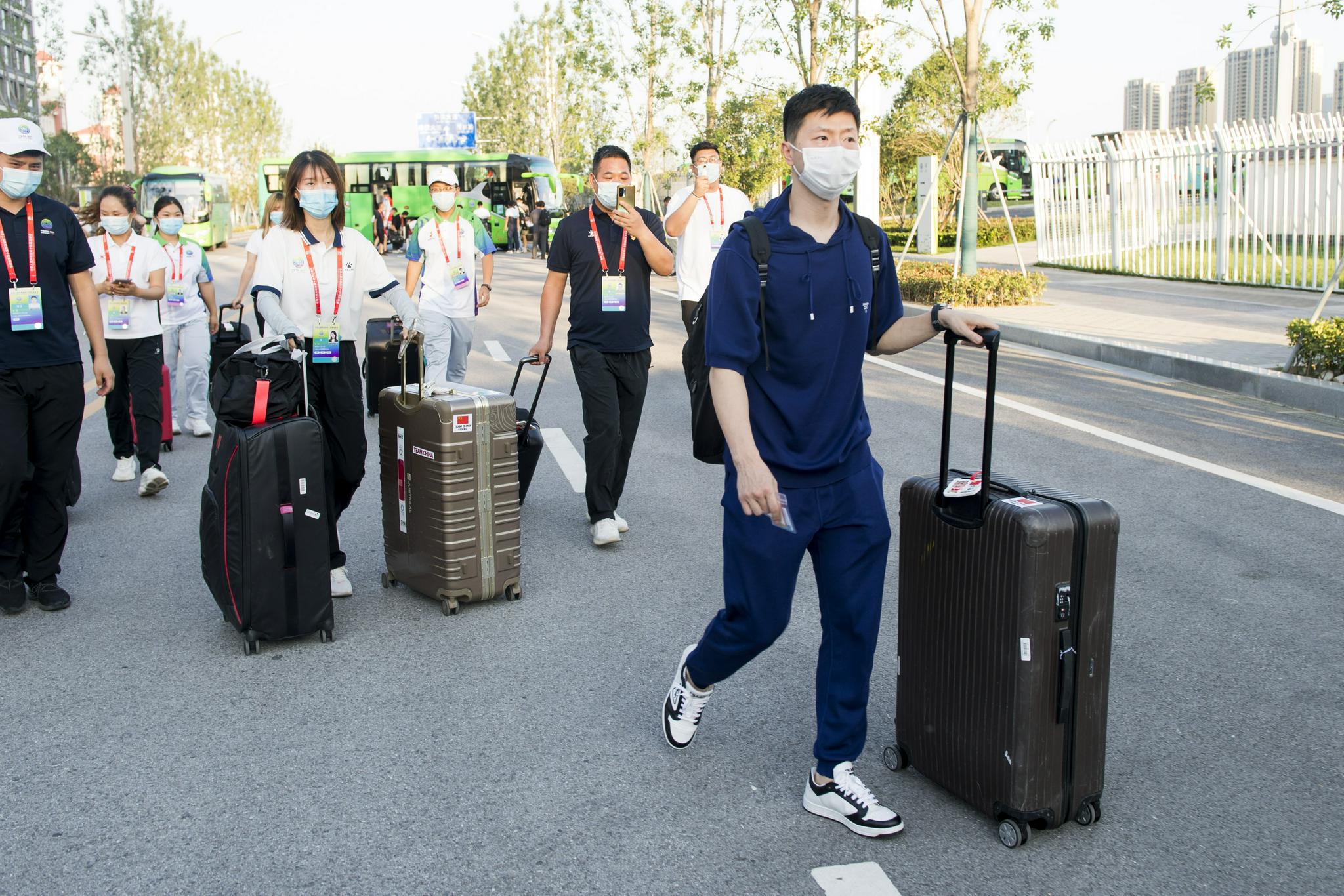 Ma Long will be the torchbearer of the opening ceremony.

Such regrets not only appear in the diving arena, but the trampoline are even more cruel.

Zhu Xueying, who won gold in the women’s trampoline at the Tokyo Olympics, was the first Olympic champion to appear in the National Games. However, in the preliminaries, she made a serious mistake in the second set of actions and dropped her equipment. In the end, she only ranked 48th in the individual competition and became the first Olympic champion to miss the gold medal in the National Games in advance.

If the characteristics of the trampoline event determine that there are more chances in the game, then a popular event in the National Games like table tennis can be described as a “battle royale”.

Not long ago, the Chinese Table Tennis Association announced that it would give up participating in the Asian Championships held in Qatar, largely because the schedule happened to “crash” with the National Games. Men’s Table Tennis coach Qin Zhijian also said unceremoniously: 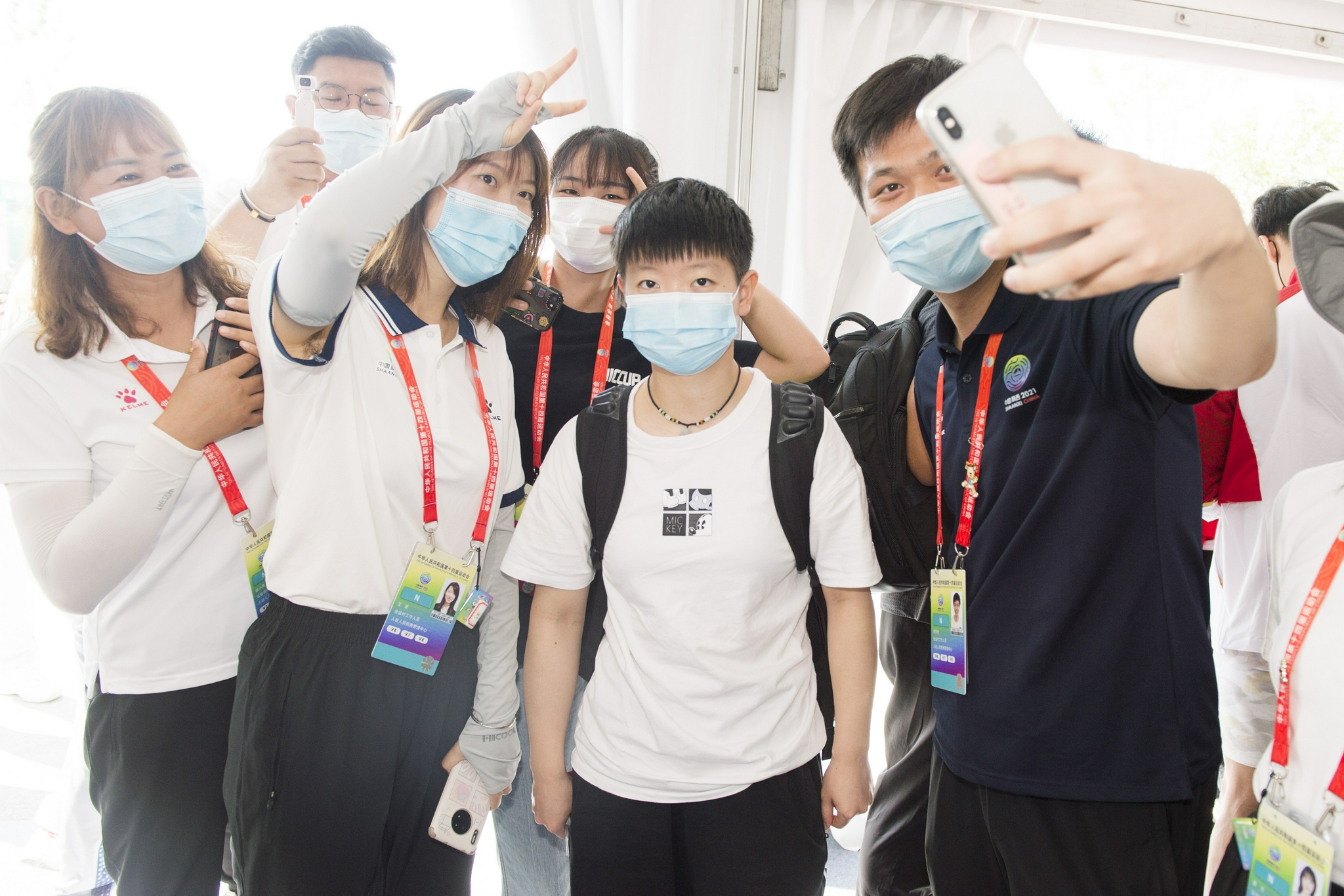 A group photo of volunteers and Sun Yingsha.

This is why Chen Meng is so worried. In her opinion, not only the athletes who go with the team to the Olympics have to learn from each other, but also the players from their respective provincial teams are also not easy to provoke.

Even in order to avoid “involution”, the Beijing team, out of tactical considerations, asked Olympic champion Ma Long to focus on men’s doubles and team events, and regrettably lost the chance to win three consecutive National Games.

However, the “involution” in the eyes of athletes can be a feast for sports fans-after all, these events may not get attention until the semi-finals at the Olympics, but the group stage of the National Games has already been suspicious. 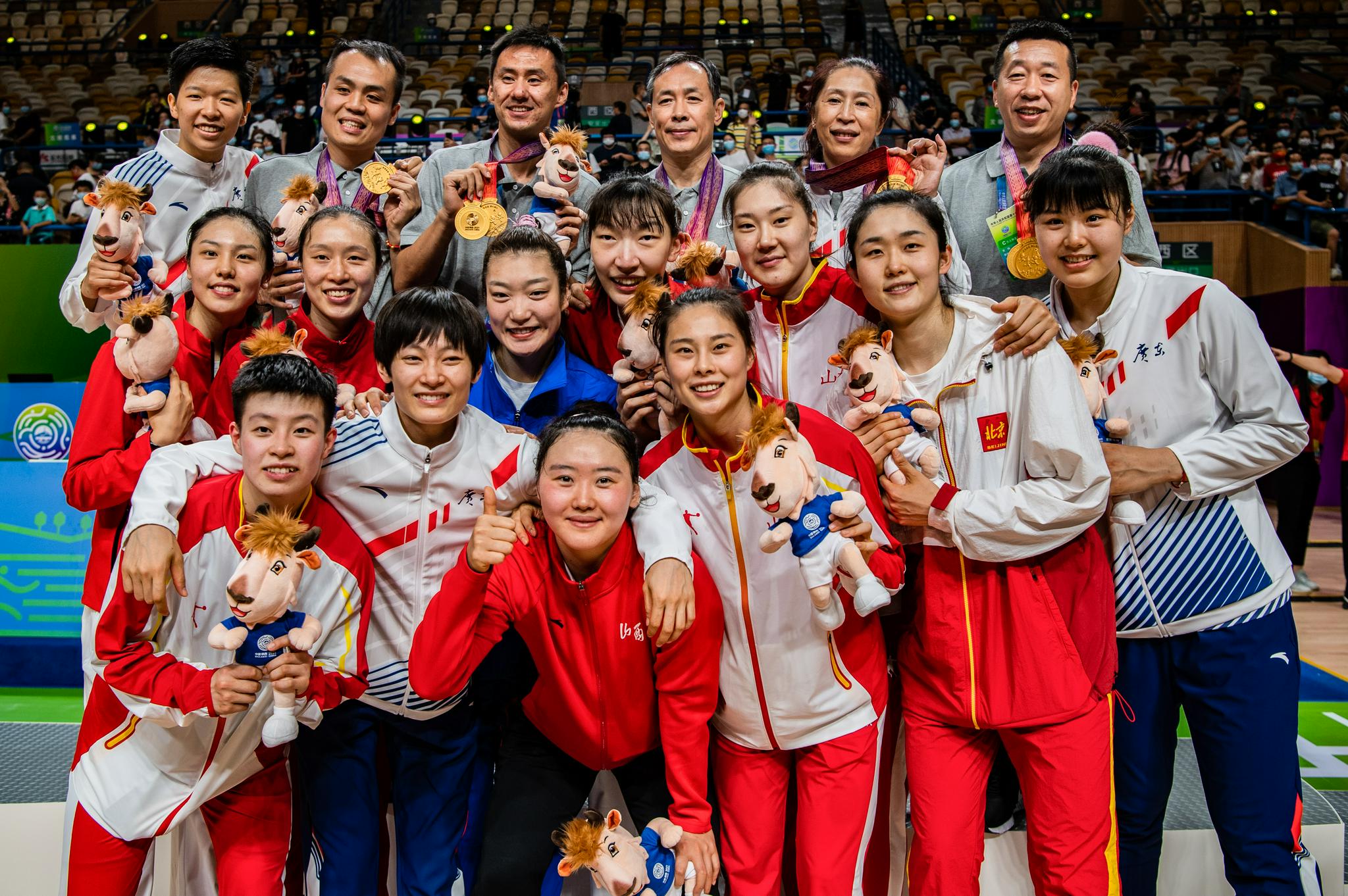 This time, the “national team” is coming

Compared with the suspense of individual competition projects, the competition of collective projects may be a bit one-sided. In team competitions, the “Olympic United Team” frequently appears.

As the name implies, the Olympic joint team refers to the national team or combination that has just participated in the Tokyo Olympics. This is also the first time in the history of the National Games that an “Olympic joint team” has appeared in the form of participation.

Since the entire team are Olympic athletes, the strength is naturally beyond the other provincial teams. For example, the Chinese Women’s Basketball Olympic Team has a smooth road to victory. In the finals, they led the Jiangsu team 27-12 in the first quarter, and there was no suspense in the game.

In addition, the Olympic joint team also competes in the National Games in a combined form. For example, in the 10-meter air rifle mixed team competition, Yang Qian and Yang Haoran formed the first Olympic team and won the championship. 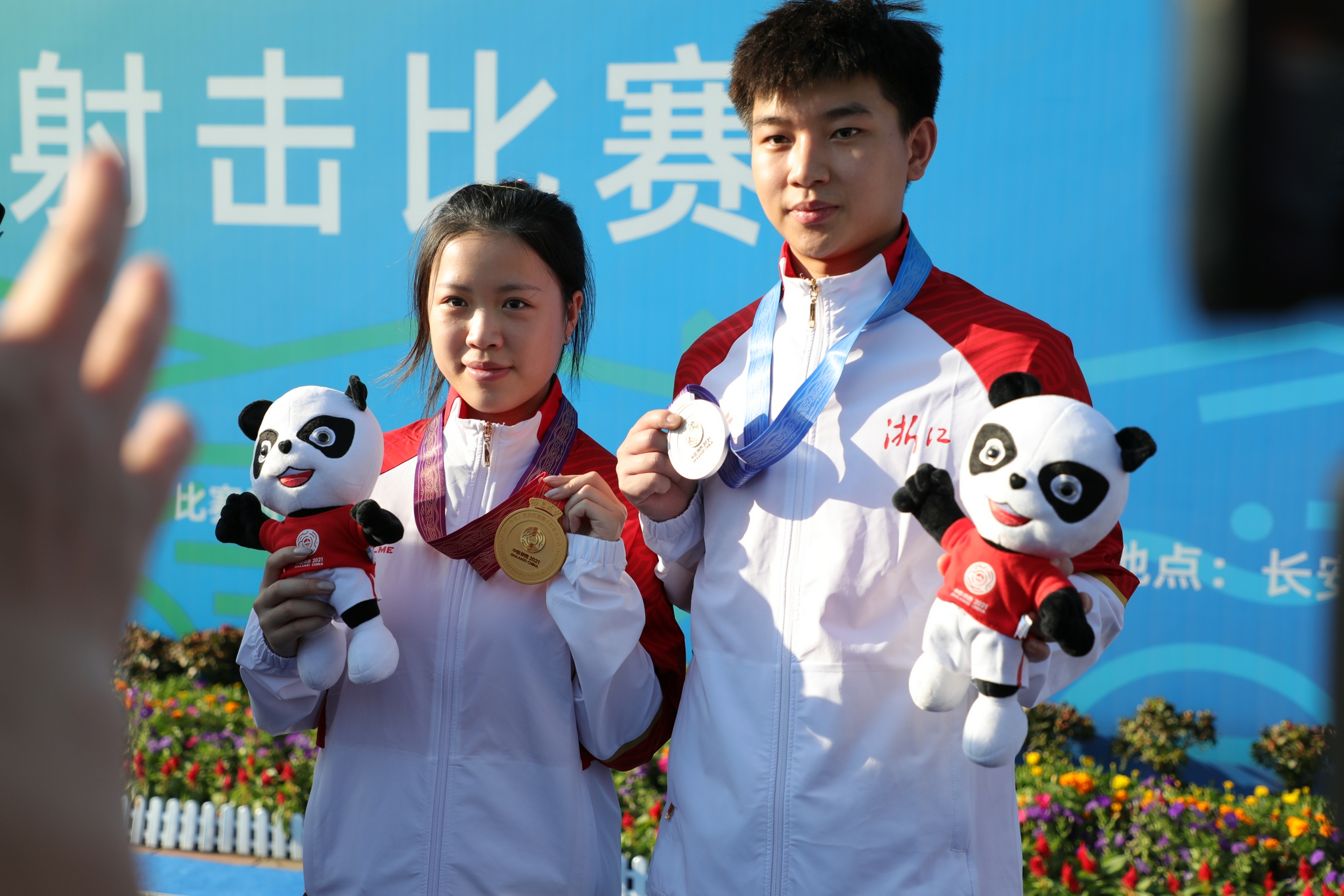 The combination of Yang Qian and Yang Haoran won gold in the National Games.

Yang Qian is from Ningbo, Zhejiang, and Yang Haoran is from Chengde, Hebei. Originally, the two should represent their respective provinces in the competition, but the emergence of the Olympic joint team concept allowed them to join hands again after the Olympics.

Why is there such a form of the Olympic joint team? The big reason is because the Tokyo Olympics is postponed for one year, making the interval between the Olympics and the National Games only more than one month apart, and the athletes will have to go through 21 days of isolation after returning to their country, so there is no time for the team events. The provincial team ran in with the Olympic athletes. 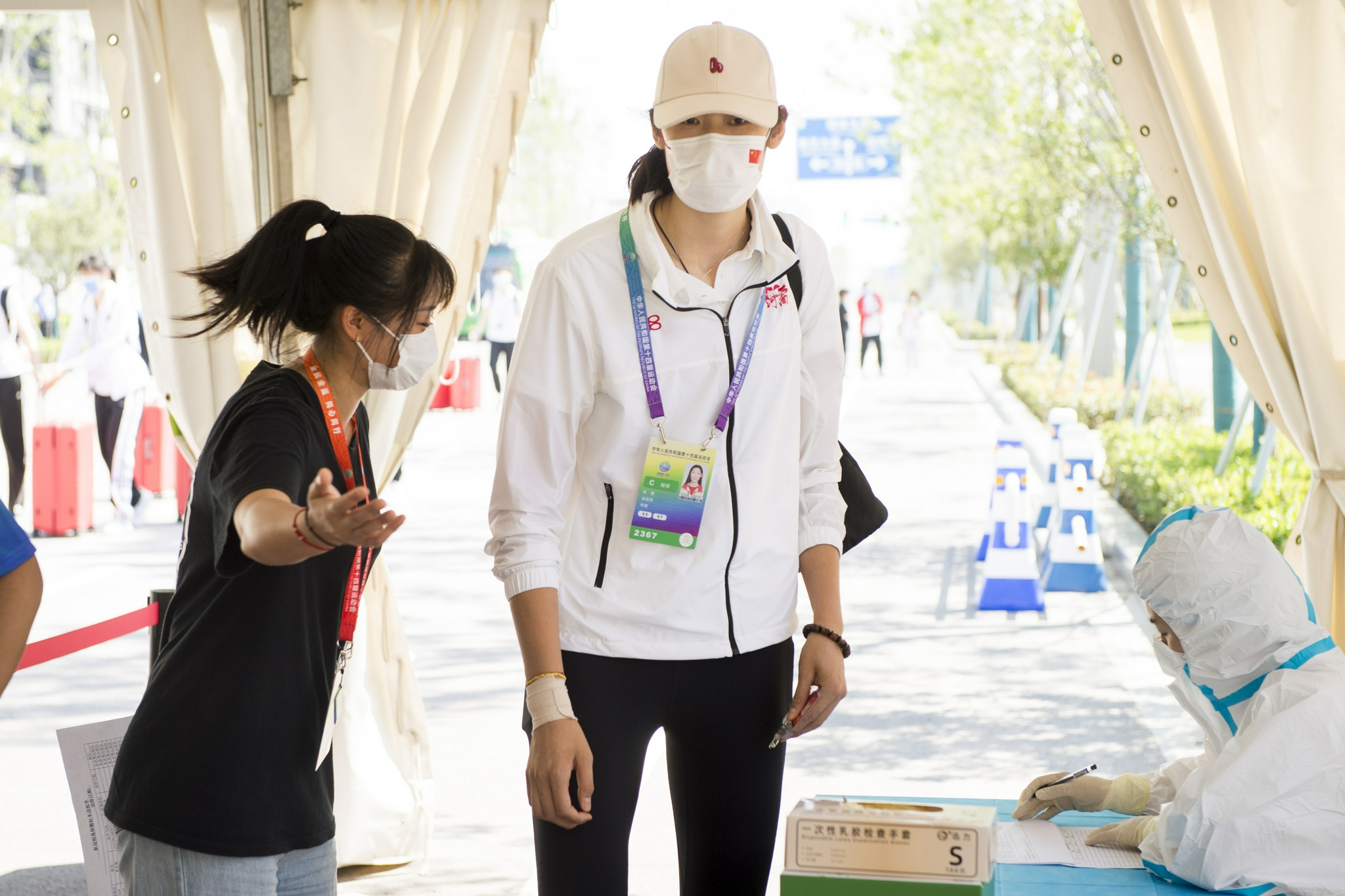 Zhu Ting came to the National Games arena with injuries.

In fact, the last National Games already had such a joint trend-Tianjin National Games encourages participating units to form teams across units in technical and tactical coordination events, which is the so-called “cross-provincial teaming.” 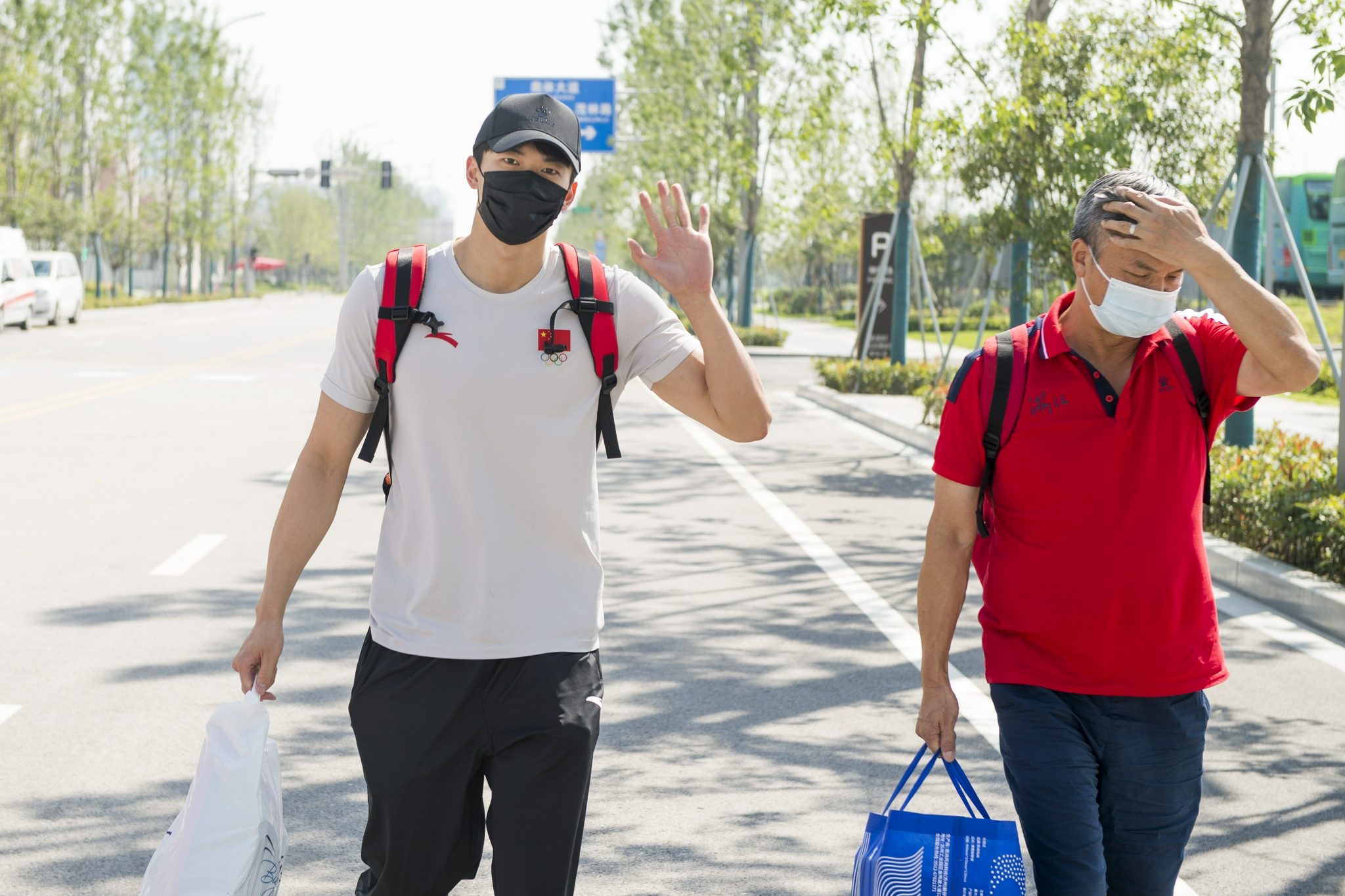 There is suspense, which means there is a dark horse. In the women’s 10-meter air pistol final at the just-concluded National Games, the name Shen Yiyao became the focus.

Before the National Games, Shen Yiyao had few reports, and even Baike and Weibo had not been able to build her profile, and she had never won a major championship before, including a national championship. 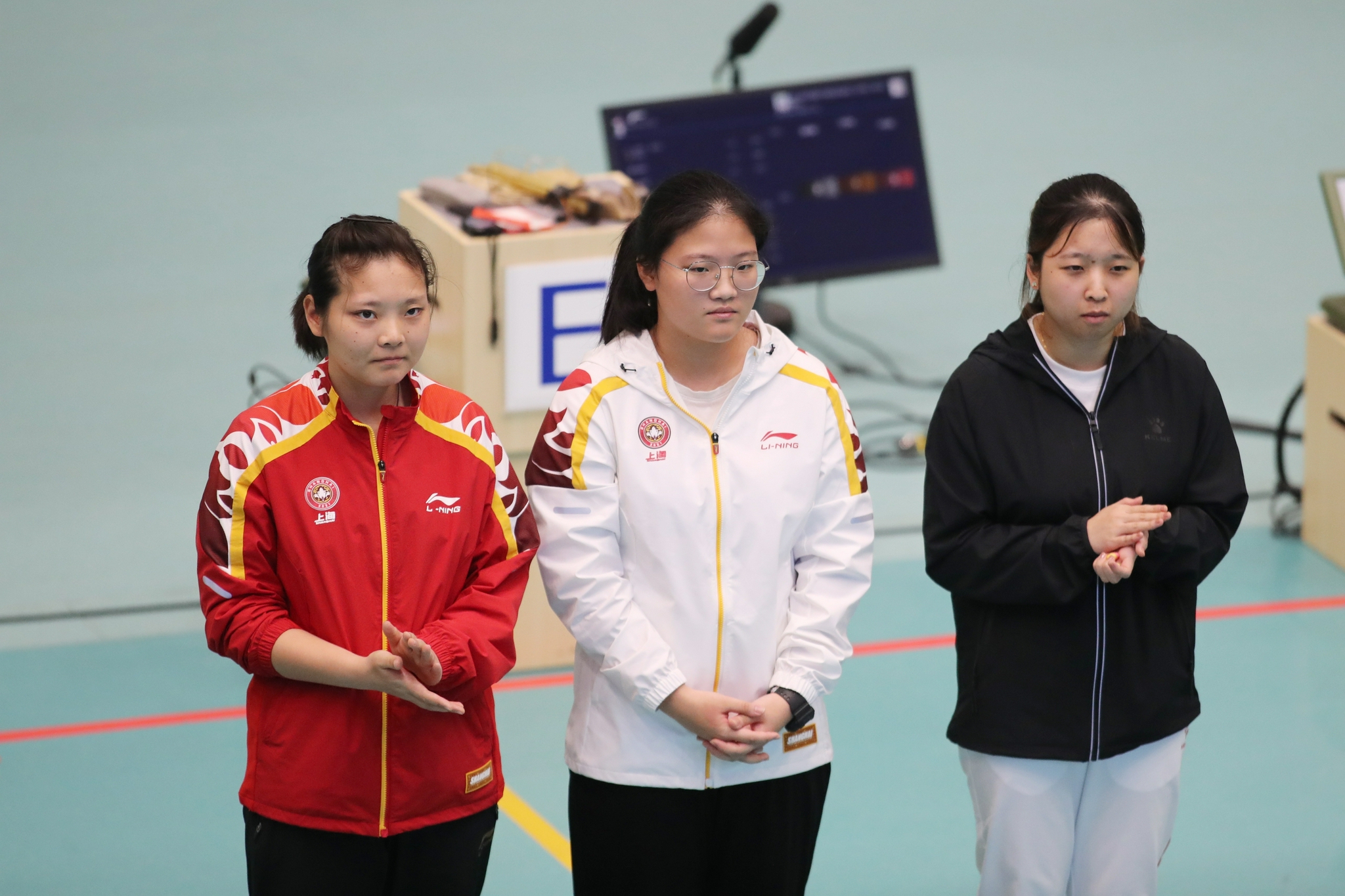 This girl with glasses and a pretty face may enter people’s field of vision from this moment-now with a slightly young face, maybe it will appear in the Paris Olympics three years later.

With the end of the Tokyo Olympic cycle, the Paris Olympic cycle has only three years of preparation time. Dark horses like Shen Yiyao, who have sprung up in the National Games, are an important force in the “metabolism” of Chinese sports.

Metabolism, this is also an important source of the everlasting prosperity of Guoping.

Before the Tokyo Olympics, Liu Guoliang once said: “To train Olympians to become’Gods of War’, we need’Wolves’ to create greater difficulties and obstacles for them on the court.”

Obviously, Guoping has begun to update the Paris Olympic cycle.

New faces and new forms naturally have new projects. In order to prepare for the Paris Olympics, the National Games will mark the 2024 Paris Olympics, adding breakdancing, skateboarding, rock climbing and surfing.

Break dancing, which entered the Olympics for the first time, became the focus of the public. This competition, which is well-known for its variety shows, has held the Chinese Street Dance League as early as December 2019 to select talents for the breakdancing event of the Paris Olympics.

What is gratifying is that the mass base of Chinese break dancing is relatively broad. Zhang Wei, secretary general of the Anhui Dance Sports Association, once said: “Although this dance did not originate in China, the level of Chinese dancers cannot be underestimated.” At the 2018 Buenos Aires Youth Olympic Games, Chinese player Shang Xiaoyu broke into the quarterfinals.

However, this is the first time that breakdance has met with you at a national comprehensive sports meeting. One year later, at the Hangzhou Asian Games, breakdance will also start a contest on the Asian level.

The third season champion of “This is Street Dance” Yang Kai is currently appearing in the National Games as a break dance coach of the Sichuan team. He said: “We not only have to prepare for the National Games. Once the National Games is over, we will soon Preparing for the Asian Games, I hope to participate in it as a coach by then.”

Antetokounmpo: James is still the strongest today, I...

Fallen and run over, the driver Dean Berta...

Chaos in the Duomo, no vax procession breaks...