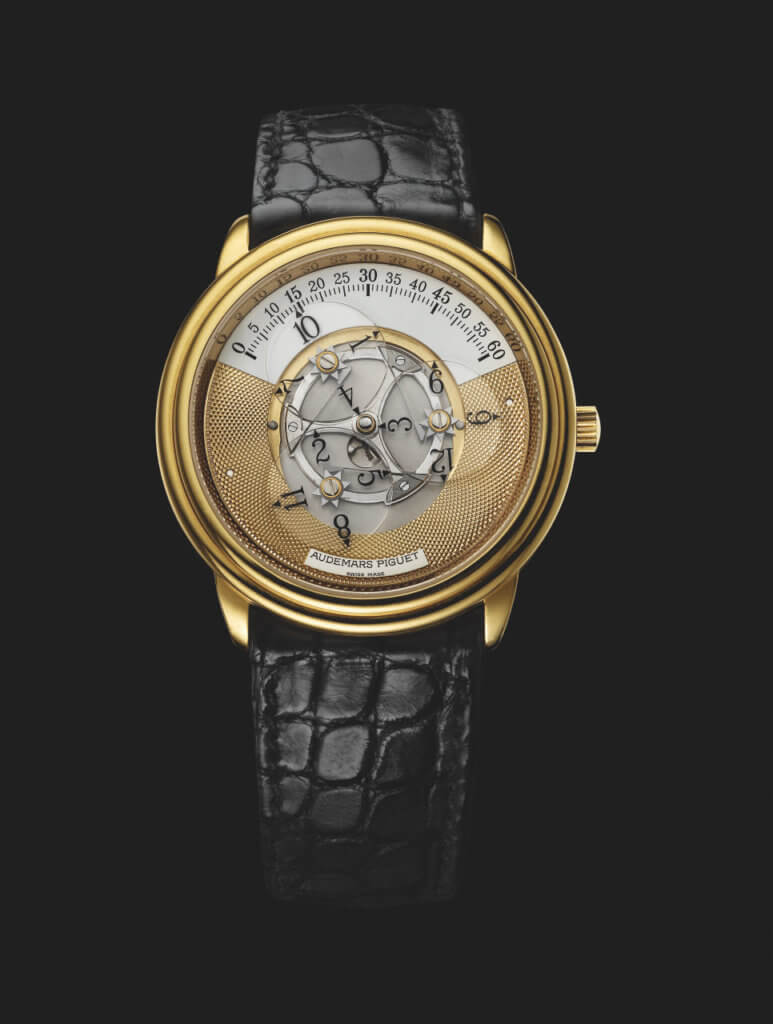 The newly launched Audemars Piguet CODE 11.59 series star wheel watch reproduces the classic function of “Time Roaming” (Heure Vagabonde), a complex function invented in the 17th century, which displays the hours with moving numbers corresponding to blocks with minute scales on the surface , the dial marked with numbers is constantly rotating, so it has the name of roaming. As early as 1991, the brand launched the first star wheel watch equipped with a roaming hour display function. It is designed with a transparent surface, like a beautiful window, and returned this year with a modern design.

The new 41mm star wheel watch is made of 18K white gold for the bezel, lugs and bottom cover, which is in sharp contrast with the black ceramic body, and the most fascinating blue aventurine surface is like a starry night sky. Three black PVD The coated aluminum alloy time travel disk is like three asteroids, slowly rotating in the universe, and the surface treated with microbead blasting is slightly raised, emitting an elegant opalescent light. The inner bezel and the 120-degree block extending from the 10 o’clock position to the 2 o’clock position all echo it. It is designed with white characters on a black background and is decorated with a white pad-printed minute scale. The watch is paired with a black textured rubber strap, and the traditional AP folding buckle is replaced by a new pin buckle engraved with the Audemars Piguet logo.

The watch is equipped with 4310 self-winding movement. The R&D personnel added modules to the 4309 movement to create this new-generation hour, minute and second display movement. It integrates watchmaking technology and traditional craftsmanship, providing at least 70 Hours of power reserve, water resistance up to 30 meters. Through the sapphire crystal glass bottom cover on the back of the watch, the exquisite rhythm of the movement and the exclusive 22K rose gold automatic disk of the series can be seen at a glance.

Who is the zodiac sign with the most luck in 2023? The probability of meeting a positive relationship is high._Emotion_What_Scorpio

ChatGPT and the loss of knowledge (of those...

343 Industries rumored to be ‘starting from scratch’...