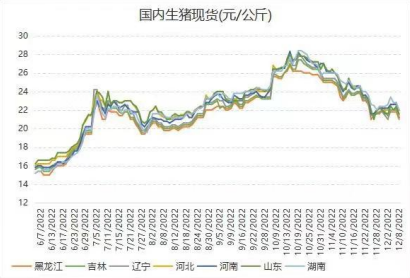 Muyuan Co., Ltd. announced on December 6 an announcement on raising the forecast for the 2022 hog slaughter range. Combined with the recent changes in the company’s hog production and sales, the company has raised the expected hog production range in 2022 to 61 million to 62 million head, which is higher than the range of 50 million to 56 million hogs previously disclosed in the 2021 annual report.

The main reasons for the increase in the range of slaughter volume are: 1. Since the beginning of this year, the company has strengthened the whole-process management of all aspects of pig farming, and the efficiency indicators of all stages of pig farming have improved; It was 13.09% in half a year, and 5.93% in July-November.

As large-scale pig enterprises have significantly accelerated their slaughter plans, and the tightening of the standard fertilizer price difference has prompted farmers and secondary fattening farmers to take advantage of the trend, the supply of live pigs in the market has increased significantly, and some group companies have experienced price cuts and increased volume. At present, terminal consumption has improved. Affected by the large-scale cooling in the country, residents’ demand for pork has recovered, and the traditional pickling situation is good. Slaughtering companies have increased orders for white strips, and they are more active in purchasing pig sources. Coupled with the optimization and adjustment of local epidemic prevention policies, catering consumption in various places has gradually shown signs of recovery. At present, the overall supply in the market is still relatively loose. The market outlook will focus on the strength of pork consumption on the supply side.

Sina Statement: This news is reproduced from Sina’s cooperative media. Sina.com publishes this article for the purpose of conveying more information, which does not mean agreeing with its views or confirming its description. Article content is for reference only and does not constitute investment advice. Investors operate accordingly at their own risk.

“FINAL FANTASY XVI” announced the release date, and it will be launched globally on June 22 next year. The price of the Collector’s Edition is 10,990 yuan

Rumor has it that the missing woman in Henan Province was kidnapped by the police, and her phone was taken away to delete the evidence | Ye Ting | Redress for her father | Lost

Safilo: 2022 another year of revenue growth and...

With solar panels the crop yield grows up...