Home Business The RMB exchange rate against the US dollar regained the 7.10 mark!Expert: Betting on the unilateral trend of the exchange rate is more risky and returning to the neutral exchange rate |
Business

After the offshore renminbi rose 1,075 points against the U.S. dollar on November 29, as of press time on the 30th, the renminbi rose by more than 500 points and regained the 7.10 mark again. Zhou Maohua, a macro researcher at the Financial Market Department of China Everbright Bank, told reporters that the global foreign exchange market has fluctuated greatly recently. From the perspective of trends, there are still many global uncertainties, and the foreign exchange market has certain fluctuations and fluctuations.

After the offshore renminbi rose 1,075 points against the U.S. dollar on November 29, as of press time on the 30th, the renminbi rose by more than 500 points and regained the 7.10 mark again.

Zhou Maohua, a macro researcher at the Financial Market Department of China Everbright Bank, told reporters that the RMB exchange rate has rebounded recently. On the one hand, the country continues to optimize epidemic prevention measures and actively promote precise and efficient implementation. Policies such as stabilizing the property market continue to make efforts, and the market is more optimistic about the prospects for economic recovery; On the one hand, the recent weakening of the U.S. dollar has led to the rebound of non-U.S. currencies such as the renminbi, and the recovery of market risk sentiment has driven capital inflows into renminbi assets.

The yuan rose sharply against the dollar for two consecutive days 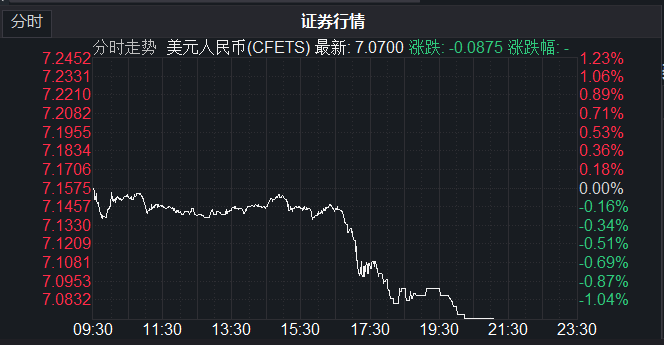 In terms of news, recently, policies to support domestic economic development have been frequently issued.

On November 25, the central bank announced that it would cut the reserve ratio by 0.25 percentage points on December 5, releasing about 500 billion yuan of long-term funds.

Immediately afterwards, on the evening of November 28, the China Securities Regulatory Commission announced five measures to adjust and optimize equity financing to support the stable and healthy development of the real estate market, which was interpreted by the industry as the “third arrow” to support the financing of real estate companies.

The spokesperson of the China Securities Regulatory Commission replied that the stable and healthy development of the real estate market is related to the stability of the financial market and the overall economic and social development. The China Securities Regulatory Commission resolutely implements the decisions and deployments of the Party Central Committee and the State Council, actively exerts the functions of the capital market, supports the implementation of plans to improve the balance sheets of high-quality real estate companies, increases the strength of equity supplementation, and promotes the real estate market to revitalize stock, prevent risks, transform and develop, and better serve Stabilize the macroeconomic market. The China Securities Regulatory Commission decided to adjust and optimize 5 measures in terms of equity financing, and they will be implemented from now on.

Pan Gongsheng: The resilience of my country’s foreign exchange market continues to increase and will maintain stable operation

It is worth noting that since late September, the fluctuation of the exchange rate of RMB against the US dollar has increased significantly.

Wang Qing, Chief Macro Analyst of Oriental Jincheng, told reporters earlier that against the background of the Fed’s continuous and rapid interest rate hikes and the increasing downside risks of the global economy, the current global capital market sentiment fluctuates violently and is prone to ups and downs.

Wang Qing pointed out that “the recent violent fluctuations also indicate that the momentum of the dollar’s rapid unilateral rise after August has weakened, and the global foreign exchange market is turning into a state of horizontal and wide fluctuations. As far as the RMB exchange rate is concerned, the current domestic economy generally remains stable. With the momentum of upward recovery, my country’s current account will continue to maintain a large-scale surplus, and the fundamentals do not support the rapid depreciation of the renminbi independently of the US dollar.”

“China‘s foreign exchange market has shown new characteristics, and its resilience has continued to increase.” Pan Gongsheng, deputy governor of the People’s Bank of China and director of the State Administration of Foreign Exchange, said at the 2022 Financial Street Forum Annual Meeting on the 21st of this month. Since then, the sensitivity of the RMB exchange rate to fluctuations in the U.S. dollar index has decreased. From a global perspective, compared with major developed and emerging market currencies, the depreciation of the RMB is at an average level. Although there were fluctuations in cross-border capital flows, they were generally stable and orderly.

In addition, Pan Gongsheng pointed out that looking forward, China‘s foreign exchange market will maintain a stable operation.On the one hand, the risk of economic recession in major developed countries has risen,Inflation is still higher than the policy target, monetary policy will remain tight overall, and the US dollar may remain high and volatile in the short term. Market institutions predict that the momentum of US dollar appreciation will weaken, and the strong appreciation cycle may be coming to an end.On the other hand, the long-term sound fundamentals of China‘s economy will not change.

In addition, the financial sector has issued a number of financial support policies to cooperate with the real estate market authorities and local governments to support rigid and improved housing needs, maintain stable and orderly real estate financing, increase financial support for guaranteed housing, and protect the legality of housing consumers. rights and interests, resolutely block and weaken risk spillovers, and stabilize market expectations and confidence.

“The above-mentioned policies have played a good role in counter-cyclical adjustments and produced positive market effects. We will adhere to the central government’s guidelines and policies on the development of the real estate market, adhere to the principles of marketization and rule of law, combine near and far, and treat both symptoms and root causes to promote China‘s real estate market. Healthy and sustainable development. In the future, changes in the internal and external macro-environment will help maintain the stable operation of China‘s foreign exchange market.” Pan Gongsheng said.

At present, there are still many uncertainties in the foreign exchange market. As for the Federal Reserve, last Wednesday, the Federal Reserve released the minutes of its November meeting, showing that slowing down interest rate hikes has become the mainstream view within the Fed, and for the first time pointed out that the probability of a U.S. economic recession next year is around 50%, which makes the market more concerned about the U.S. economic recession and long-term interest rate cuts increased expectations.

However, this week, several Fed officials once again released “hawkish” signals. According to the Associated Press, New York Federal Reserve Bank President John Williams said in a speech in New York on the same day that there are signs that the inflation situation is easing, but the Fed “has more work to do” to bring the inflation rate down. to approach the 2% target.

On the same day, St. Louis Fed President James Bullard said financial markets had underestimated the Fed’s determination to take more aggressive steps to tackle the worst inflation in 40 years. The Fed may have to keep interest rates above 5% next year and possibly into 2024, he said.

It is reported that on the 2nd of this month, the Federal Reserve just announced that it will raise the target range of the federal funds rate by 75 basis points to 3.75% to 4%.

Wang Qing previously told reporters that against the background of the Federal Reserve’s continued rapid rate hikes and the increasing downside risks of the global economy, the current mood in the global capital market fluctuates violently and is prone to ups and downs.

Schillaci: “Community homes are reference centers for the chronically ill”. And on Covid vaccines: “Their effectiveness should not be doubted”

The temperature in the south is low, there are rainy and snowy weather in the west and north of the south of the Yangtze River_Guangming.com

Africa: The African Bank is committed to the...

Lazio elections, after the alliance Zinga fears the...

Forecasts for 2023, Target Price and Quotation

Lazio elections, after the alliance Zinga fears the...

The soundtrack of the brands is worth 7.6...

The export of Amarone is growing, the USA...