“National Juice” is expected to usher in a rebirth! Recently, the reorganization plan of Beijing Huiyuan Food and Beverage Co., Ltd. (hereinafter referred to as “Huiyuan”), the subsidiary of “Huiyuan Juice”, was approved by the court. Shanghai Wensheng Asset Management Co., Ltd. (“Wensheng Assets” for short), as a reorganization investor, plans to invest 1.6 billion yuan to become the controlling shareholder of Huiyuan. Of the 1.6 billion yuan investment, more than 90% of the funds were used to upgrade and strengthen Huiyuan’s production and operation, except for part of the funds used to pay Huiyuan’s bankruptcy expenses and repay small claims.

Strive to achieve A-share listing within three to five years

According to the latest announcement by the National Enterprise Bankruptcy Reorganization Case Information Network, on June 24, the Beijing No. 1 Intermediate People’s Court issued a civil ruling, ruling to approve the reorganization plan of Beijing Huiyuan Food and Beverage Co., Ltd. 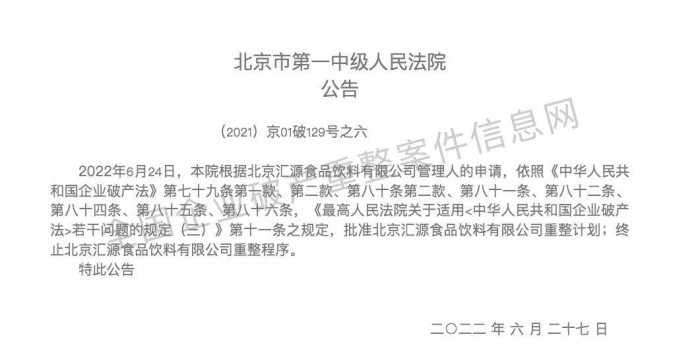 In 2009, The Coca-Cola Company’s US$2.4 billion controlling stake in China Huiyuan Juice Group Co., Ltd. (hereinafter referred to as Huiyuan Group) was terminated due to anti-monopoly concerns. Huiyuan Group invested a huge amount of capital to build the whole industry chain layout for the above-mentioned transactions, which has laid hidden debts for subsequent operations. As the core enterprise of the Huiyuan Group system, Huiyuan has undertaken many financing functions in the process of operation, and provided huge guarantees for the financing of related parties. Under the downward pressure of the international and domestic economy and the impact of multiple rounds of epidemics, related parties defaulted on their debts, Huiyuan had liquidity risks, and debt risks broke out in an all-round way. In July 2021, the court ruled that Huiyuan entered the reorganization process.

See also  Two ministries and commissions issued a notice to promote the orderly development of affordable rental housing REITs, and 2 projects have been officially declared_China IT News

A reporter from China Securities News learned from Wensheng Assets that Huiyuan’s total liabilities are about 8 billion yuan. In the state of bankruptcy and liquidation, the ordinary debt settlement rate is only 6.10% under optimistic conditions. Realizing debts with existing assets will greatly damage creditors’ rights and interests. . Depending on the type of claims, creditors will be repaid in different ways: employee claims and tax claims will be repaid in full in cash; property-secured claims will be repaid in full in the form of retention; One-off repayment in cash, and ordinary creditor’s rights exceeding 1 million yuan will be fully repaid in the form of debt-to-equity swap.

Wensheng Assets said that through the above repayment methods, Huiyuan’s debt repayment rate is expected to increase from 6.1% under simulated liquidation to full repayment. At the same time, Wensheng Assets will also design the best securitization plan for Huiyuan, and strive to achieve A-share listing within three to five years. As a reorganization investor, Wensheng Assets invested 1.6 billion to become the controlling shareholder of Huiyuan. Some of the funds were used to pay Huiyuan’s bankruptcy expenses and repay small claims, and more than 90% of the funds were used to upgrade and strengthen Huiyuan’s production and operation.

According to Huiyuan’s official website, Huiyuan was established in 1992 and has established more than 140 operating entities across the country, linking more than 10 million mu of high-quality fruits, vegetables, tea and grains and other planting bases. There are more than 200 world-leading fruit processing and filling production lines. Over the years, Huiyuan has continued to lead the medium and high concentration juice market in terms of sales volume and market share. In 2018, Huiyuan 100% fruit juice and medium-concentration fruit and vegetable juice accounted for 43.7% and 31.5% of the market sales volume respectively, with an increase of 0.9% and 6.9% respectively compared with 2017, and continued to be the top seller of medium- and high-concentration juice.

See also  Saixin Electronics sprints to the Science and Technology Innovation Board: It plans to raise 620 million yuan, the actual controller Tan Jian is American_Partner_Shareholding_Company

Reorganized investors to complete the third round of financing

A reporter from China Securities News learned from Wensheng Assets that Wensheng Assets was established in 2006 with a registered capital of RMB 1,000,031,828 and total assets of RMB 5.04 billion. The company is deeply engaged in the field of non-performing assets, and its business covers non-performing asset investment and services, equity restructuring of distressed enterprises, and restructuring of distressed real estate. As of December 2020, the cumulative management scale (principal and interest) of the non-performing assets segment reached 95.5 billion yuan; the targets of the equity segment of distressed enterprises include Nanjing Construction Industry Group Co., Ltd., Xinjiang La Chapelle Garment Co., Ltd. and other well-known enterprises; distressed real estate The plate has successively completed projects in Shanghai, Beijing, Jiangsu, Guangdong and other places.

In October 2021, Blackstone Group, the world‘s largest alternative asset management institution, together with Guotong Investment Co., Ltd. and GF Securities Co., Ltd., made a minority investment in Wensheng Asset’s third round of financing.

Three doses protect from Long Covid, even with Omicron – Health

Wimbledon, Nadal beats Sonego 3-0 and wins the second round

Seizing the Opportunities of Industrial Reform to Cultivate...

The loan balance of the West Coast New...

The second largest shareholder of the domestic CPU...

In the era of sports digitalization, how to...