Caption: source of Yuyuan Lantern Festival/provided by interviewees (the same below)

During the Spring Festival holiday, Shencheng launched more than 500 “Top Ten Benefiting People Tours” holiday series activities and products centering on the theme of “happy new year, get what you want”, so that citizens and tourists can feel safe, healthy, peaceful and peaceful all the time. Warm Spring Festival holiday. According to Shanghai tourism big data monitoring, the city received 5.6881 million tourists in the four days before the Spring Festival. There were no major security incidents or major public opinion emergencies in the cultural tourism market.

The intangible cultural heritage is revitalized to welcome the new year, and the Shanghai-style New Year flavor gathers popularity

At the same time, the holiday online travel products elaborately launched by various cultural tourism platform companies have been welcomed by citizens and tourists. Meituan’s “Must Order List” and “Fun Play List” and other online Spring Festival travel service products provide tourists from other places with an “authentic” welcome to the new life in Shanghai; Citizens and tourists discover more and experience more; Bilibili creates a “cloud” year-end collection around local folk customs and traditional intangible cultural heritage, and invites local KOLs to create tens of millions of traffic; Douyin links industry merchants and industry experts to upgrade Integrate live broadcast and short video scenes to promote the recovery of popularity in the cultural and tourism market.

The blockbuster hot exhibition sees the world, and the excellent works of the art exhibition are full of artistic charm

During the Spring Festival holiday, the city’s cultural and museum venues carefully planned and launched various major exhibitions. The city’s 62 museums held 38 exhibitions, and 29 art galleries held 67 exhibitions. Attracted a large number of citizens and tourists. “From Botticelli to Van Gogh: Collections of the National Gallery of England” launched by the Shanghai Museum presents the history of European painting from the Renaissance to the Post-Impressionism in the 19th century through a selection of 52 pieces/groups of exhibits, attracting the attention of Shanghai Museum of Art. Many citizens and tourists who love art go to check in. In the first four days of the holiday, the Shanghai Museum received 27,000 visitors, an 84% year-on-year increase.Shanghai Aurora Museum, China Art Museum (Shanghai Art Museum) and Pudong Art Museum launched “Floating Paris – Henri de Toulouse-Lautrec Global Tour Art Exhibition” and “A Hundred Years of Art”·The Light and the Wind and the Moon——Exhibition of Modern and Contemporary Art Works in Shanghai” and “The Land of Absolute Beauty: Collections from the National Archaeological Museum of Naples” and other exhibitions provided citizens and tourists with a variety of cultural experiences.

In addition, during the Spring Festival, a series of New Year concerts and performances launched by the Shanghai Symphony Orchestra Concert Hall, Shanghai Concert Hall, and Shanghai Grand Theater have also exported and demonstrated the charm and style of Shanghai as an international cultural metropolis for the general public and tourists. The New Year Symphony Concert led by the Shanghai Grand Theater, the Beijing Opera Concert led by Tianchan Shaw Stage, the Kunqu Opera “Talk of the Horse” and other opera performances, the British classic farce “The Show is Broken” by the Drama Art Center and the immersive musical of the Asia Building Waiting for turns to be staged, enriching the holiday market and attracting a large number of audiences. 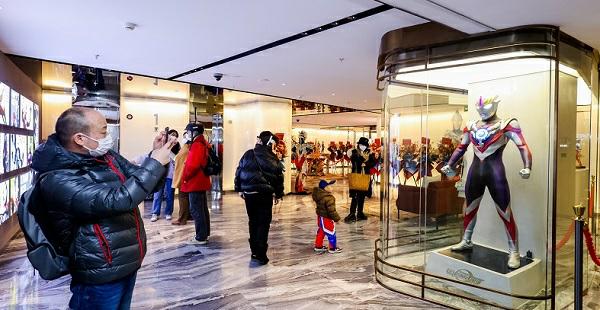 During the Spring Festival holiday, major hotels and hotels in the city have launched catering and accommodation products with a strong New Year flavor. “Change to a new home” to enjoy delicious food, and staying in hotels has become an important choice for consumption during the Spring Festival holiday. The sales of New Year’s Eve dinners in major hotels and hotels have increased significantly compared with last year rise. The best sunrise and sunset viewing spots on the 120th floor of Jinjiang J Hotel are open to hotel guests during the Spring Festival. Primus Hotel Shanghai Hongqiao has launched a one-price all-inclusive product during the Spring Festival, including hotel services such as guest rooms, morning and evening buffets, swimming, fitness, and children’s playgrounds. During the Spring Festival holiday, the number of performances in this city has increased significantly, and performance consumption has shown a sharp rebound. The total number of performances scheduled for the 7 days of the Spring Festival has reached 602, an increase of 32% year-on-year. The box office has sold about 10.26 million yuan, an increase of 42% year-on-year. Various art categories including traditional opera, music and dance, talk shows, children’s dramas, musicals, circus dramas, etc. gather on the festival art stage. Children’s dramas and parent-child dramas are the highlights. There were 315 tourism performances at Disneyland, Safari Park, and Circus City, accounting for 52.3%, and 143 parent-child concerts and children’s plays, accounting for 23.8%.

See also  The Lyceum Theatre, a writing about "victory"_上海街

The city’s tourist attractions actively responded to the initiative, launched various activities and products to benefit the people, and served migrant workers and citizens in Shanghai. A total of 101 tourist attractions launched ticket discounts and various products to benefit the people during the Spring Festival, inviting the general public and tourists to have an in-depth experience , discovering a different Shanghai. In addition, the three 5A-level tourist attractions in the city, the Oriental Pearl TV Tower, Shanghai Wildlife Park, and Shanghai Science and Technology Museum, also presented gifts to migrant workers in Shanghai from e-commerce platform companies such as Meituan, Ele.me, Hema, Dingdong Maicai, and Dada. Free tickets during the Spring Festival.

I want to break the news

Xinmin news shall not be reproduced without authorization

Texas Instruments (TXN.US) achieved a net profit of approximately US$1.96 billion in Q4, and it is expected that Q1 performance will be lower than expected Provider Zhitong Finance

[Front-line interview]People worry about the second peak and...