Home News “Snow Typhoon” is forming this year’s cold wave, which has greatly exceeded the standard: the northeast will reproduce the total snowfall of the blizzard or break the record-Latest News
News

“Snow Typhoon” is forming this year’s cold wave, which has greatly exceeded the standard: the northeast will reproduce the total snowfall of the blizzard or break the record-Latest News

From the evening of November 20, the cold wave began to move south. Gust monitoring showed that weather vanes above level 6 have expanded rapidly since last night, covering the grasslands of western Inner Mongolia and extending to Shanxi and Beijing-Tianjin-Hebei; and in the early morning, strong wind areas above level 8 have also begun to appear. In the squally wind, some dust even appeared in Beijing.

The wind in the north is so strong, in addition to the strong cold wave itself, it is also related to the formation of the “snow typhoon”. Since last night, the Mongolian cyclone has begun to develop, and it has arrived in Inner Mongolia today; and this afternoon, under the attack of the strong warm and humid air current, the Yellow Sea cyclone has also formed. The two cyclones will merge in Jilin and Heilongjiang to form a powerful northeast cyclone.

This northeast cyclone can be said to be a “snow typhoon.” After absorbing the power of the two cyclones, its central pressure will drop below 985 hPa, comparable to a strong tropical storm; and its wind field will spread across the entire northeast, and the wind will not be inferior to today’s North China. More importantly, under its suction, a large amount of warm and humid air will converge with cold air in the northeast, and snowstorms will appear again. The situation of this blizzard is very stable; the range is very large, and the entire northeast has to fall. Shenyang is small to medium snow, Changchun, heavy snow, Harbin, and heavy snow; the intensity is very strong, and there will be two in the Hegang-Jiamusi-Shuangyashan area in the center of the blizzard. The day’s heavy snowfall-extremely heavy snowfall, the total snowfall will also be close to the last time Tongliao, and it may be close to or break the local November record. 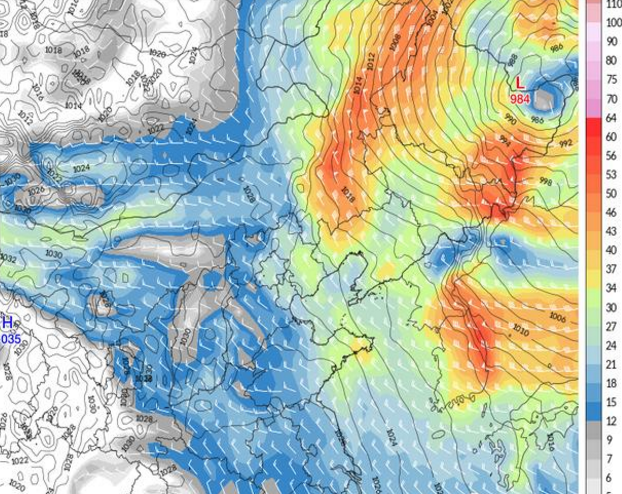 This is the second “snow typhoon” encountered in the Northeast this year, and also the third nationwide cold wave that my country has encountered since October. According to perennial data, the average number of cold waves in my country from September to November is 1.9, and it is more in the early years, and less than 1.5 since the new century. Undoubtedly, before the arrival of winter in the climatic sense, the cold wave in our country has greatly exceeded the standard.

cnBetalatest newsThe "snow typhoon" is forming this year's cold wavewhich has greatly exceeded the standard: the northeast will reproduce the total snowstorm or break the record
0 comment
0
FacebookTwitterEmail
previous post

For the first time, the Pope transmits an encyclical only by e-mail

Mario Draghi: “No state secrets about the Moby...