Rome, 2 October 2021 – Fire in the evening in Rome, in the Ostiense area. The Ponte dell’Industria in focus. Part of the bridge, also known as the ‘Iron Bridge’, which connects via del Porto Fluviale to via Pacinotti, went up in flames. Firefighters intervened on the spot to put out the flames. Numerous calls from citizens to report the fire. 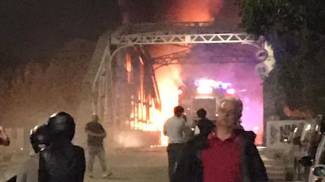 The fire affected the vegetation and makeshift shelters. A gas pipeline is also involved. 6 teams present on site and the NBCR nucleus of Rome sent. At the moment it would appear that there are no people involved.

See also  Boggioni, another bronze with the 100 freestyle: "What a thrill, I really didn't expect it"
0 comment
0
FacebookTwitterEmail
previous post