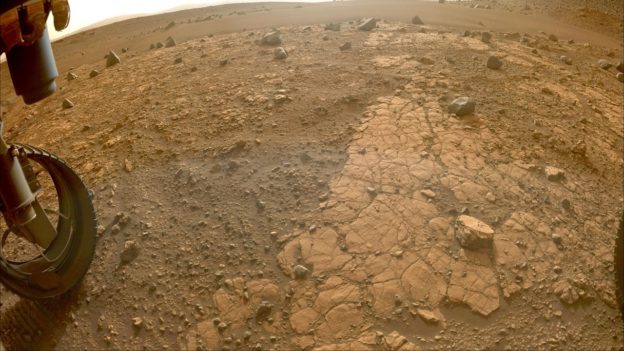 In the past, many probes such as Curiosity and Express have found evidence of organic compounds on Mars. Perseverance, which is exploring the Jezero crater, has recently followed in the footsteps of its predecessors. Although organic compounds do not guarantee the existence of life, they can help understand the history of water on Mars and reveal whether there were some life processes.

NASA’s Perseverance rover was launched on July 30, 2020 Eastern Time, and successfully landed on Mars on February 18 of the following year and landed in the Jezero crater. It successfully produced oxygen on Mars for the first time, released the smart helicopter to explore, Collect Martian rock samples and store them.

There are fan-shaped sedimentary areas formed by two ancient rivers on the edge of the Jezero impact crater. Perseverance has discovered organic compounds produced by the interaction between water and rock here, but whether there are organic compounds elsewhere on the bottom of the impact crater has been unknown. It is an unresolved problem. Scientists originally expected that the bottom of the pit should be mostly sedimentary rocks. However, when Perseverance arrived, they found that most of the rocks were igneous rocks.

Now, an international team led by Eva Scheller, a planetary scientist at the California Institute of Technology and the Massachusetts Institute of Technology, used the Perseverance SHERLOC instrument to analyze three igneous rocks at the bottom of the impact crater, and found two traces of obvious changes in the rocks after contact with water, which can explain Two distinct water environments existed in different periods in the past.

Spectral features consistent with benzene-like aromatic hydrocarbons were also found in the three rocks, indicating that there is an interaction between igneous rocks, water phase transitions, and Martian organic materials.

The researchers said that we still need to wait for Mars samples to return to Earth, and use the high-standard equipment of the earth laboratory to study these compounds in detail, in order to be more clear about whether Mars was suitable for life in the early days. The new paper was published in the journal Science.

Covid, how to know if you have been infected by the new Cerberus and Gryphon variants?

Ang Lee will direct the Bruce Lee biopic, and Li Chun has been training for the role of Bruce Lee for three years

How does the lower-priced M2 Mac mini differ...

A variety of game masterpieces have joined the...