Typhoon “Meihua” has moved into the East China Sea, Sichuan Basin, Guizhou and other places with obvious precipitation

Beijing News According to the Central Meteorological Observatory, strong wind and rain occurred in Zhejiang, Shanghai, Jiangsu, Taiwan and other places yesterday (12th): from 8:00 yesterday to 06:00 today (13th), due to the influence of the peripheral cloud system of typhoon “Plum Blossom”, the northeastern part of Zhejiang , There are heavy to heavy rains in parts of southeastern Jiangsu, Shanghai, and northern Taiwan Island, Zhejiang Ningbo and Zhoushan, Jiangsu Suzhou and Nantong, and eastern Shanghai and other local heavy rains (100-215 mm), and local heavy rains in northern Taiwan (250 mm) ～286 mm), the maximum hourly rainfall in the above-mentioned areas is 30-70 mm; gusts of magnitude 7 to 8 occurred along the coast of northeastern Fujian, the coast of Zhejiang, and islands and reefs, with gusts of magnitude 9 to 10 locally. In addition, heavy rains or heavy rains occurred in parts of Yunnan, southwestern Guizhou, northern Chongqing, western Hubei, and southern Shaanxi, and local heavy rains (100-153 mm) in southwestern Guizhou, Chongqing Chengkou, etc.; Xinjiang Yili and the area along the Tianshan Mountains Moderate rain, local heavy rain.

(1) Typhoon “Plum Blossom” has moved into the East China Sea

The Central Meteorological Observatory issued an orange typhoon warning at 06:00 on September 13: This year’s No. 12 typhoon “Plum Blossom” moved into the southern part of the East China Sea early this morning (13th) and strengthened to a strong typhoon level at 5:00 a.m. Its center is located in Zhejiang On the sea surface about 490 kilometers east-southeast of Xiangshan County in the province, it is 25.5 degrees north latitude and 124.1 degrees east longitude. The maximum wind force near the center is 14 (42 m/s), the lowest pressure in the center is 955 hPa, and the radius of the seventh-level wind circle is 220-260 kilometers, the tenth-level wind circle radius is 60 kilometers, and the twelve-level wind circle radius is 30 kilometers.

It is expected that the “Plum Blossom” will move from the north to the northwest at a speed of 10-15 kilometers per hour, and the intensity will be strengthened. It will gradually approach the coast from Wenling to Zhoushan in Zhejiang Province. Landfall in coastal areas (typhoon level or strong typhoon level, 38-45 m/s, level 13-14); after landfall, “Plum Blossom” will continue to move to the northwest, and its intensity will gradually weaken (see Figure 1).

Affected by it, from 08:00 on September 13 to 08:00 on September 14, the Bashi Strait, the northern part of the Taiwan Strait, the ocean to the east of Taiwan, the southwestern waters of the Yellow Sea, most of the East China Sea and the waters near the Diaoyu Islands, the Yangtze River Estuary, Hangzhou Bay and Taiwan Island. There will be strong winds of magnitude 6-8 and gusts of magnitude 9-11 on the northern and eastern coasts, the coast of Zhejiang, the northern coast of Fujian, the coast of Shanghai, and the southeastern coast of Jiangsu. , The wind on the sea near the center of “Plum Blossom” is 12-14, and the gust can reach 15-16. From the 13th to the 15th, there were heavy to heavy rains in northern Taiwan Island, eastern China and other places, heavy rains in some areas, and local heavy rains.

(2) There is obvious precipitation in Sichuan Basin, Guizhou and other places

Affected by the shear line, from the night of the 13th to the 15th, there were moderate to heavy rains and local heavy rains in the Sichuan Basin, western Guizhou, and northern Yunnan.

In the next three days, the Arabian Peninsula, the Mesopotamian Plain, the Iranian Plateau, the Indus River Plain, southern Central Asia, North Africa, the United States and the western coast of Mexico, northern Australia, and central Brazil will have high temperatures above 35°C in parts of the country. , the daily maximum temperature in some parts of West Asia, North Africa and other places exceeds 42 ℃.

From 08:00 on September 13th to 08:00 on September 14th, the western regions of Xinjiang along the Tianshan Mountains, the eastern Qinghai-Tibet Plateau, the western Sichuan Basin, southern Yunnan, southwestern Guizhou, northwestern Guangxi, southeastern Anhui, central and southern Jiangsu, Shanghai, and most of Zhejiang , There are moderate to heavy rains in parts of the northern part of Taiwan Island and other places. Among them, Shanghai, northern Zhejiang, southeastern Jiangsu, northern Taiwan Island and other places have local heavy rain or heavy rain (100-140 mm), high-altitude mountainous areas in Xinjiang, northern Tibet, etc. There is sleet or snow on the ground. There are winds of magnitude 4 to 6 and above in parts of western Inner Mongolia, the southern Xinjiang Basin, western Gansu, and the coastal areas of the Yangtze River Delta. There are dusty weather in southern Xinjiang Basin, western Gansu, western Inner Mongolia and other places. There are winds of magnitude 6 to 8 in parts of the East China Sea, the Taiwan Strait and beyond, and the Bashi Strait, and gusts of magnitude 10 to 12 above the southern part of the East China Sea and east of Taiwan (see Figure 2).

From 08:00 on September 14 to 08:00 on September 15, most of Liaodong Peninsula, central and eastern Shandong, most of Jiangsu, eastern and southern Anhui, Shanghai, most of Zhejiang, western and southern Sichuan Basin, southern Yunnan and other parts of To heavy rain, among them, there are local heavy rains or heavy rains (100-180 mm) in eastern Shandong Peninsula, southeastern Anhui, southern Jiangsu and eastern coastal areas, Shanghai, and northern Zhejiang. There are 4-5 winds in parts of western Inner Mongolia and other places (see Figure 3). There are winds of magnitude 6 to 8 and above in parts of the Bohai Sea, the Yellow Sea, and the northern part of the East China Sea. 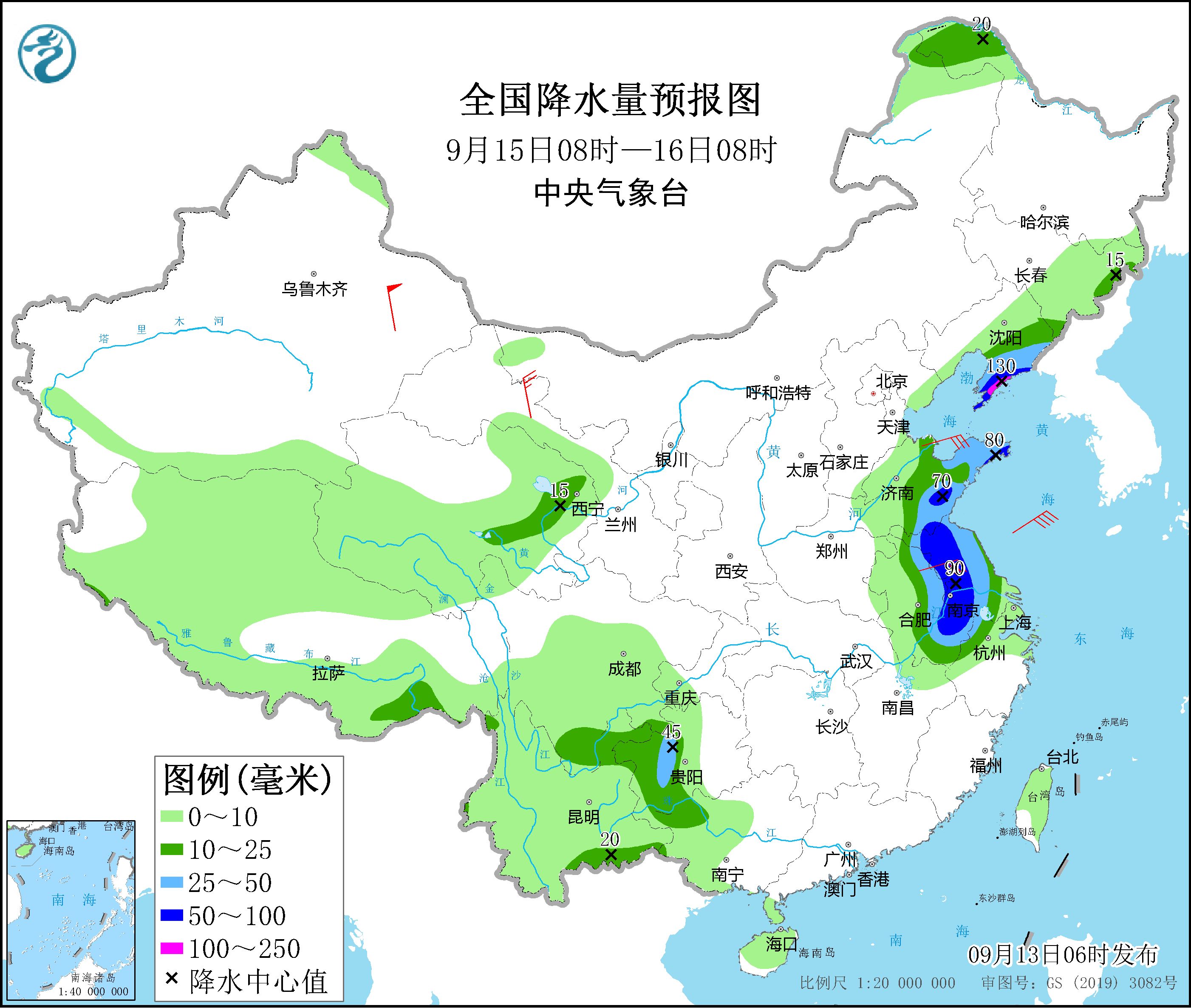 1. Pay attention to the wind and rain impact of typhoon “Plum Blossom” on the coastal areas of East China, the East China Sea, and the Huanghuai waters;

2. In Sichuan, Yunnan, Guizhou, Guangxi and other places with heavy rainfall, pay attention to the possible flash floods and geological disasters, and continue to provide meteorological support services in Sichuan earthquake areas and along the Sichuan-Tibet Railway;

4. Pay attention to the changing trends and impacts of meteorological droughts in the Yangtze River Basin.

Udinese – The point on Martins’ performances: the...

Daniel Craig offered advice to the actor who...

Everything you need to know about bathroom remodeling