Home Business What should I do if I am deficient in lithium? Musk-style solution: Tesla does it itself – Tesla Tesla electric car – cnBeta.COM
Business

What should I do if I am deficient in lithium? Musk-style solution: Tesla does it itself – Tesla Tesla electric car – cnBeta.COM

During Tesla’s earnings call, Musk confirmed that Tesla is building a lithium smelter in Texas.Musk has called lithium prices “absurdly expensive,” and he has repeatedly encouraged entrepreneurs to develop lithium-refining operations to ease supply bottlenecks for key materials in lithium-ion batteries.

At a time when many car companies have been hit hard by soaring lithium prices, Musk took the lead.

After the U.S. stock market closed on Wednesday, Tesla announced its third-quarter revenue, which was a record high in a single quarter, but its gross profit margin was lower than expected. The gross profit margin of the auto business was below 30% for two consecutive quarters. Tesla attributed it to rising raw materials, commodity prices and increased logistics costs.

Musk and other executives agree that most commodities are falling, shipping is prohibitively expensive, and the price of battery-grade lithium is not. Without any incentives, Tesla’s battery bill would probably hit $70/kWh.

When asked about the progress of the latest 4680 battery technology development on the earnings call, Tesla CEO Elon Musk confirmed that Tesla is building a lithium smelter in Texas, USA. Musk has called lithium prices “absurdly expensive,” and he has repeatedly encouraged entrepreneurs to develop lithium-refining operations to ease supply bottlenecks for key materials in lithium-ion batteries.

The media previously reported that Tesla had been considering the project for several months, but had previously considered another location in Louisiana. Tesla has told regulators that it plans to build a battery plant near Corpus Christi to refine lithium hydroxide, processing raw ore into a more suitable feedstock.

The surge in global lithium prices 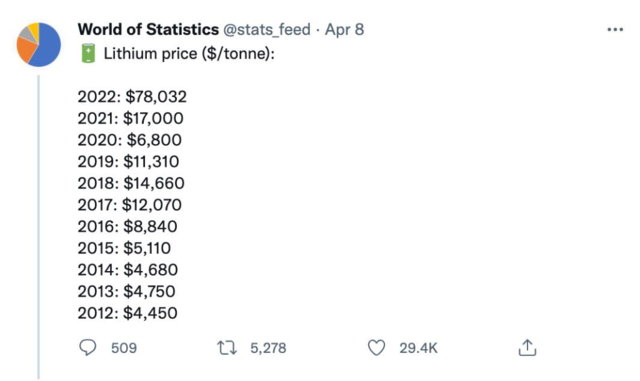 Lithium prices have reached crazy levels! Unless costs increase, Tesla may actually have to go straight into (lithium) mining and refining at scale.

Lithium prices rose more than 480 percent last year, according to Benchmark Mineral Intelligence. At the same time, the U.S. Geological Survey said that lithium mines do exist across the United States. This also increases Musk’s confidence in “doing it himself”.

Last month, Australian spodumene, a rock containing unrefined lithium, fetched more than $7,700 a tonne at auction, in a sign of a lithium rush. That equates to a production cost of $74,000 per ton of lithium carbonate, which would be a record high, according to consultancy Rystad.

Competition is fierce and the supply side is struggling to meet demand. This is still not a market where supply and demand are balanced.

Driven by high lithium prices, some companies have launched lithium projects in Latin America and Australia. Latin America and Australia are the two largest lithium mining regions in the world. But analysts say it will take years for the projects to go into full production and ease supply shortages, in part because the South American government is seeking greater control over its natural resources.

See also  Ferrari, record revenues in the first quarter of 2022, the engine of the new "Purosangue" unveiled

What is lacking is technology, not the resources themselves, future demand will still rise

Musk has repeatedly mentioned the limitations of this kind of business on the development of the electric vehicle industry. He said in July:

Again, I would like to urge entrepreneurs to get into the business of refining lithium.

Lithium is found almost everywhere, but it must be refined into battery-grade lithium carbonate and lithium hydroxide, which requires a high degree of purity. So getting into this business at the moment is like printing money to make money.

Musk believes that lithium will still limit the development of the new energy vehicle industry in the short term.

Zeng Yuqun, chairman of CATL, also said that the price of lithium carbonate has skyrocketed in the short term this year, but the reserves of mineral resources are abundant. At present, the real challenges of the industry chain and enterprises come from three aspects. The first is that consumers have higher requirements for R&D capabilities. higher requirements. Since the beginning of this year, CATL has also suffered from rising raw material prices.

In the U.S. and elsewhere, traders and analysts expect lithium demand to skyrocket over the next few years as the auto industry phases out internal combustion engines and rolls out electric vehicles. Companies such as General Motors, Ford and Volkswagen are also investing billions of dollars in electric-vehicle factories to catch up with Tesla.

More than 80 percent of lithium-ion batteries are used in electric vehicles, said Daisy Jennings-Gray, senior analyst at Benchmark Mineral Intelligence. Benchmark predicts that by 2030, this proportion will rise from 40% in 2015 to 90%.

cnBetaTesla Tesla electric carWhat should I do if I am deficient in lithium?Musk-style solution: Tesla does it itself
0 comment 0 FacebookTwitterEmail
previous post

From astrophysicist to beekeeper, the parallel talent of...