Marvel Super Heroes“Spider-Man: The Hero Is Homeless”The “War of Destiny” preview was released on November 17. As the concluding chapter of the Spider-Man hero series trilogy, “Spider-Man: Heroes Without Home” will bring what kind of surprises, and the answer will gradually emerge. The opening of the multiverse, the arrival of the five big enemies, the subversive cross-temporal assembly, and the re-joining of Spider-Man and Doctor Strange since “Reunion 4” can be said to evoke everyone’s enthusiasm and feelings for the Spider-Man series. With the release of the trailer, the popularity of “Spider-Man: Heroes Without Home” has gradually increased, and there have also been many fantasy linkages in the minds of fans.

“Spider-Man: Heroes Homeless” “Heroes Side by Side” poster

The Dutch brother and Robert Downey Jr. reunited with netizens: Dreaming back to “Reunion 4”

The Dutch brother and Robert Downey Jr. participated in public welfare activities, and the two had a reunion video chat. The Iron Man played by Robert Downey Jr. is recognized by Marvel as the patriarch, so movie fans often call him “Iron Man Daddy.” Since the release of “Spider-Man: Homecoming” in 2017, many fans have been moved by the warmth between him and the little Spider-Man next door and have become an army of “iron insects”. As a leader and life mentor, Iron Man continues to teach Spider-Man to grow up like a father. Outside the play, the Dutch brother and Robert Downey Jr. also forged an indissoluble bond. The rivalry between the two is called “Iron Worm Fan”, and it is too emotional to call Downey’s father role and little spider. 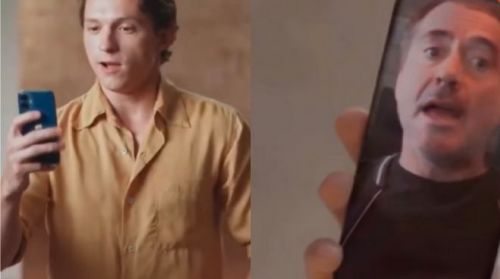 Dutch brother and Robert Downey Jr. participated in charity activities, and the two had a reunion video chat

In “Avengers 3”, the tragic moment of Spider-Man turning ashes is still fresh in many fans’ memories. The moment the Dutch brother disappeared into Downey’s arms, Iron Man looked particularly helpless. Many fans were moved by the two when they saw this scene. This time, the video chat of the Dutch brother and Robert Downey Jr. reunited also made netizens cry on the spot. Netizens said, “In “Spider-Man: Homecoming”, little spider likes to chat with Mr. Stark so much. “

The new look of the Dutch brother “Downey” netizen: when he grows up he becomes you

On November 19th, Tom Holland appeared in the annual men’s issue of GQ magazine and won the title of Man of the Year and Superhero of the Year. When attending the GQ gala, the Dutch brother wore a retro brown suit and red sunglasses. His handsome outfit was found by netizens to resemble Robert Downey Jr., making movie fans deeply moved. Senior movie fans know how much Robert Downey Jr. loves sunglasses. Not only does he never leave his hands every time he makes his appearance, but he also sets off the trend of colored sunglasses. Many of his fans have begun to follow suit. Four years have passed since the Dutch brother first appeared in Spider-Man. Over the years, he has gradually faded and he has been experimenting with new styles. Netizens marveled that the Dutch brother’s temperament has become so mature recently, and fans have posted a comparison of the same shape between Little Spider and Stark, saying that this is the real version of “you will become you when you grow up.”

Two generations of Spider-Man embrace netizens in the same frame: this is inheritance

From “Spider-Man: Homecoming” in 2017 to “Spider-Man: Far From Home” in 2019, director Joe Watts has taken Spider-Man IP to a whole new level. And this time, in the third part of the series, “Spider-Man: Heroes Without Home”, the pattern is even more grand. You can see the clue from the trailer. Its rich elements are beyond the imagination of the audience. The hero series movie will surely live up to expectations and become a must-see movie in 2021. The film will be released on the big screen in North America on December 17.

The constellation whose career will be successful in...

And Macbeth be it. Everything is ready for...

Not just jewels, so Damiani grows and diversifies:...

Chen Xiaonan: Look for the commonality behind the...

The recovery of LPG. The Kia challenge: the...