On August 6, Chang Zexiang (front) rehearsed with her singing team. There are happy events and songs, and there are more patterns than white events. The Baotou is an embroidered hat, and the apron and trousers are usually blue.

On August 21, 2020, Chang Zexiang and her singing team sang in the yard of a family in Caibai Village, Jijie Township. Bai Shi is different from other playing songs. First, the clothes are simple, with black baotou, trousers, and shoes; second, the three kinds of shoulders should be removed in the steps, and only one of them should be left. Hit the tune. The extensive development of Da Ge in civil activities is the basis for its inheritance and development.

On August 6, Chang Zexiang taught his grandson to sing in his yard. 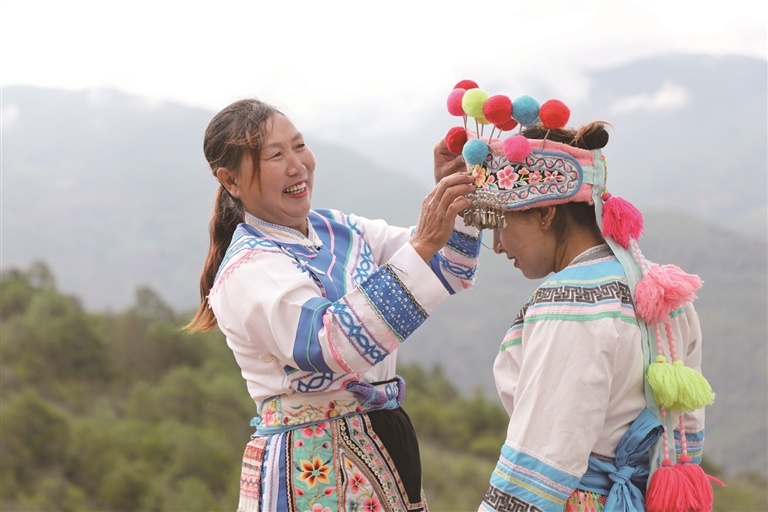 On August 6, Chang Zexiang helped her sister Chang Hanxin to dress up before singing.

Chang Zexiang (second from right in the front row) took a group photo with the singing team she led after the rehearsal.

The unique singing of the Yi people has made Jijie Township in Yangbi County famous. Because Chang Zexiang led the Jijie Township Yi nationality singing team to the central, provincial, prefecture, county and other stages to appear, he also won the National Youth Singer TV Grand Prix and was recognized as the third place in Dali in 2013. The representative inheritor of the “Yi Dage” in Yangbi County, an intangible cultural heritage project, is well-known far and near.

See also  Put on these slippers, you can think of your first love | Slippers | Trend | Fashion_Sina Fashion_Sina

In early August, she walked into Chang Zexiang’s house in the Xu Moyi group of Jijie Village, Jijie Township. She was teaching her grandson to sing in the yard, while her daughter Qin Jianli was dancing. “My sisters and daughters are all good singers, and even my 9-year-old grandson has learned the basic movements of the 16-step and big sword dance.” Chang Zexiang said that the Yi nationality singing has been passed down for 6 generations at home, and he also He has taught more than 500 people successively, and accepted 41 apprentices, some of whom have grown into representative inheritors of intangible cultural heritage at the state and county levels.

Jijie Yi Dage belongs to the “Laluo” branch, and is called “Eke” in Yi language. According to the records of the “Jingdong Zhili Hall” in the Qing Dynasty, playing songs had been widely circulated at that time. During the Spring Festival, the small year (the fifteenth day of the first lunar month), the Torch Festival, weddings and parties, people would form a circle and dance all night. . Chang Zexiang’s grandmother told her: “In ancient times, in order to prevent bandits from attacking the stockade, the young and middle-aged men in the stockade negotiated to set up a bonfire, form a circle, play the flute, reed, dance the big knife, sing songs, and shout in unison. ‘Hey, let’s go (we have more and more people)’ to frighten the bandits, and the bandits will be scared away from a distance.”

Chang Zexiang has followed her grandfather and grandmother to participate in weddings, weddings, temple fairs and other activities since she was a child. Under the precepts and deeds of her elders, she has some talent. At the age of 7, she learned to jump 16 steps (three steps, kicking in place, three left and right). Steps, three steps before three steps, three steps back, four steps back and turns, etc.), at the age of 9, he learned to jump 3, turn 3 and turn tricks (popular turn, turn with two steps, turn with big three steps, etc.), at the age of 15, he learned Yi from his grandfather. The basic sword technique of the big sword dance, when he was 16 years old, he represented the commune to participate in the state national festival performance.

See also  Rian, the originator of Hallyu, was exposed to cheating in marriage? The wife is Bai Fumei and has a super high value. He is so ignorant? _Kim Tae Hee_Rain_Chen Haomin - Sohu

Chang Zexiang introduced that the main melody of the Jijie Yi nationality singing is played by the flute, the reed plays the rhythm, the knife dancer accompanies the dance, the male half circle and the female half circle surround the song. The rhythm also quickens, and along with the rhythm, men and women sing duet to each other, forming a unique melody.

“If you want to learn how to sing songs of the Yi people in Jijie, you must first learn 16 steps!” Chang Zexiang said, 16 steps are the foundation, including flute, reed and knife dancers must first learn, followed by Yi language rap, Only when they are integrated, can the Yi people in Jijie sing and dance well. In recent years, in order to highlight the effect of stage performance, Chang Zexiang has added new content such as the first three steps to touch the knife, the last three steps to turn the knife, and the three stomps to touch the knife.

In Jijie Township, whenever there are weddings and festivals, temple fairs, birthdays and festivals, singing is required. Chang Zexiang and the singing team she leads have been active in various folk activities for a long time. As long as someone invites, Chang Zexiang will take the team to participate. , using the unique performance method of the Yi people, to jump out of the fire-like character and flamboyant vitality of the Yi people, and express their respect for life and nature and their own national emotions. (Yang Jiayan and Fu Guiping)

what to know, symptoms and transmission

The second season of “Your Honor” released a...

“The Corset” releases a special episode about the...

“An Mian Bookstore” releases posters for the fourth...

Legendary Pictures and Sony reached an agreement for...

Scarlett Johansson joins “Just Cause” for the first...