Editor’s note“No matter where our career develops, no matter how great we have achieved, we must vigorously promote the great Long March spirit and continue to march forward courageously on the new Long March road.” Since the 18th National Congress of the Communist Party of China, General Secretary Xi Jinping has inspected the local area. Shi set foot on the Red Army’s long march revolutionary sacred place many times, and made a series of important expositions on the inheritance and promotion of the great Long March spirit. To commemorate the 85th anniversary of the victory of the Red Army’s Long March, People’s Daily Online launched a series of reports on the “Long March Road in the New Era in the Footsteps of the General Secretary”.

In the east of Ganzhou, Jiangxi, the Yudu River flows slowly, nourishing this small county called Yudu. In October 1934, 86,000 people of the Central Red Army assembled from here and started the world-famous 25,000-mile Long March.

“We must not forget the original aspiration and mission of the party, the revolutionary ideals and the purpose of the revolution. We must continue to hold high the banner of revolution, carry forward the great spirit of the Long March, and march forward courageously towards the goal of the great rejuvenation of the Chinese nation.” May 20, 2019, Xi Jinping emphasized when visiting the Central Red Army Long March Departure Memorial Hall in Yudu County.

Only by remembering history can we look forward to the future. This year marks the 85th anniversary of the victory of the Red Army’s Long March. Standing at a new starting point, Yu Du vigorously promoted the spirit of the Great Long March and firmly followed the new Long March road.

“Long March Spirit” into the blood of the city

This is a unique pair of straw shoes: two hydrangea embroidered on the toe. The owner of the shoes is Xie Zhijian, an old Red Army in Lingbei Township, Yudu County. When he was sent to leave home for an expedition, his childhood sweetheart, Chunxiu, gave him this pair of unique shoes.

On the entire Long March, Xie Zhijian only wore these shoes twice. In 1951, Xie Zhijian returned to Yudu to look for Chunxiu, only to learn that Chunxiu was killed shortly after the Long March. With these straw sandals, Xie Zhijian lay down on the tomb of Chunxiu and wept bitterly.

See also  Comprehensive news: Xinjiang’s population development is obvious to all to see that Western forces’ attempts to block China’s development will not succeed-experts and scholars from many countries positively appraise the white paper on "Xinjiang’s Population Development"

Now that the gunpowder has cleared, the “Long March Complex” has long been deeply integrated into the blood of this city.

In the ancestral hall of Hanxin Village, Duanwu Township, Yudu County, 77-year-old Xiao Nandou sits on a straw-shoe bench with an arc-shaped waist pole, four hemp ropes, and a handful of straw, while playing straw shoes and telling the children in his hometown. The story of straw shoes and the Long March.

“My father saw that many Red Army soldiers had no shoes on, so he quietly organized the villagers to wear straw sandals at home, and made more than 200 pairs of straw sandals in five or six days, all of which were given to the Red Army living in the village.” When Xiao Nandou was 13 years old, he followed his father to learn how to make straw sandals. His skillful movements have become even thicker after years of precipitation.

Xiao Nandou said: “As long as I have time, I will come here to weave straw sandals. Whenever a child comes to see, I will tell him the story of the Long March. I hope they can study hard and cherish the hard-won happy life now.”

Jiangxi was the starting point for the Long March of the Central Red Army. In recent years, the local area has fully explored the “red home base”, made good use of red resources, and told good stories about red.

“Through seeking upwards for national special funds, county-level fiscal arrangements, special funds, and donations from social forces, nearly 100 million yuan has been invested to repair 68 revolutionary cultural relics. At the same time, relying on the rich red resources in the county, increase the number of red resources. The support for the creation of subject literature, the creation of lyrics and music, etc., has continued to introduce excellent masterpieces.” said Lan Huaying, curator of the Long March Departure Memorial Hall of the Central Red Army in Yudu County.

Make good use of red resources

The blue wisp of the road leads to the mountains and forests.

In Qilushan Town, Yudu County, a winding Red Army trail is hidden in the forest. In October 1934, before the Central Red Army crossed the Du River at night and broke through the enemy’s first blockade line south, one of its troops secretly set out from here.

In the autumn afternoon, the reporter followed Liu Bingfa, the third-level chief officer of Qilushan Town, to walk the Red Army Long March trail, following the footsteps of revolutionary martyrs, and climbing up the stairs. , Siyuan Well, Dengxian Bridge and other scenic spots, I met many people who came here to organize team building.

“This Red Army Long March trail has become a place for’net celebrities’ to check in.” Liu Bingfa told reporters that since the Red Army’s Long March trail was developed, more and more tourists have come to re-take the Long March Road, which has not only promoted the development of local tourism, but also made it rich. The villagers’ pockets.

After more than an hour, it finally reached the end, and many tourists were out of breath. “I deliberately wore hiking shoes to walk the Red Army’s Long March trail. I didn’t expect it to be so tired. I can imagine the hardships of the Red Army.” Tourist Liu Yeqing told reporters that next time he will bring his children to experience it, so that they will not forget the “time and road.” “, take a good “way ahead.”

This Long March trail has now become a broad road for nearby villagers to get rich.

Hu Shizhao, who had almost no source of income, became a red commentator after the development of the Red Army’s Long March trail tourism resources. By telling tourists about the scenery and historical stories along the trail, Hu Shizhao can increase his monthly income by 2,800 yuan.

“The red commentators are mostly surrounding villagers. After professional training and assessment, they can take up their posts. As a part-time job, they can also take care of the family.” Liu Bingfa said. Currently, the Red Army’s Long March Trail has trained 26 red commentators.

“The development of the entire trail not only allows villagers to get jobs at their doorsteps, but also helps local farmers sell local specialties.” Liu Bingfa said, breaking his fingers. During the National Day, the number of tourists per day reached more than 3,000, and the direct economic income reached more than 1 million yuan. .

It is understood that in recent years, Yudu County has fully developed the red tourism brand and accelerated the development of a modern service industry dominated by red tourism. In 2020, the annual number of tourists will be 8.836 million and the comprehensive tourism income will be 7.26 billion yuan. Accumulative operating income reached 3.649 billion yuan. 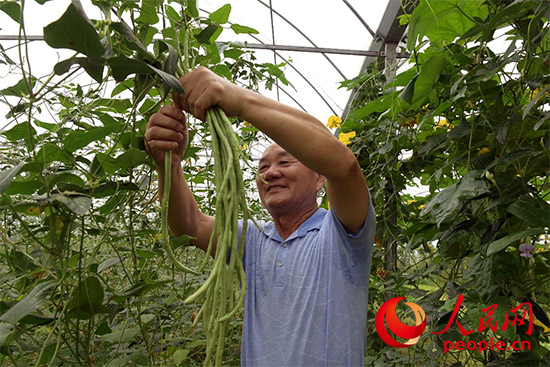 Walking into the selenium-rich vegetable industrial park in Tantou Village, Zishan Town, villager Li Jinlu was immersed in the joy of harvest, looking at the mature fruits and melons in the garden. “With the vegetable industry, we no longer have to live a hard life. As long as we work hard, life will be better.”

General Secretary Xi Jinping emphasized during an inspection of the Zishan Se-rich Vegetable Industrial Park that the original intention of the Communist Party of China was to seek happiness for the people and rejuvenate the nation. The Central Committee of the Party wanted to do everything possible to make the people live a good life. Sesame blossoms are steadily high, and the days to come will be even better.

In the past, “increasing income was difficult”, but now “the industry is good.” Yudu County utilizes abundant selenium-rich soil resources to vigorously develop selenium-rich agricultural industries.

“Through the model of’leading enterprises + cooperatives + farmers and poor households’, the villagers around the park have been driven to get rid of poverty and become rich. The poor people around the park have a fiery atmosphere of’competition’ for planting vegetables, and more and more farmers have invested in the development of the vegetable industry. In the upsurge of the city.” Guo Qingfeng, Secretary of the Party Committee of Zishan Town, Yudu County, introduced.

Li Wen, the contractor of the Vegetable Industrial Park, told reporters that after graduation, Yudu started his own business and has been engaged in vegetable planting management. At present, he manages 30 acres of greenhouse vegetables and has an annual sales income of about 400,000 yuan.

In the garment production workshop of Winner Fashion (Ganzhou) Co., Ltd., pieces of women’s trousers are flowing at a constant speed on the silver-white smart hanging production line. Dozens of workers are organized in an orderly division of labor, sitting in front of the machine and busy in an orderly manner… In the workshop, the female workers are methodically busy.Photo courtesy of Rong Media Center, Yudu County

From the traditional “smart daughter-in-law” garment workshop to the intelligent manufacturing industrial park, Yudu County is closely following the goal of industrial doubling and upgrading. A series of important measures, such as improving quality and efficiency, are committed to building a textile and garment industry cluster of 100 billion yuan.

“There are more than 3,000 textile and garment enterprises in the county, of which 109 are above designated size, with more than 80,000 jobs.” Ding Yousheng, the head of Yudu County Textile and Garment Industry Development Center, told reporters that last year, the industry’s output value reached 525. The development momentum is very strong.

According to Huang Fa, secretary of the Yudu County Party Committee, in the next five years, Yudu County will highlight the “four major brands” of Long March culture, fashion capital, selenium-rich industry, and sports integration, and strive to build prosperity, beauty, safety, and happiness in Yudu. Strive to be the vanguard of building a high-quality development demonstration zone in an old revolutionary base.

Spring goes and autumn comes, and the timing changes. The water of Yudu River still flows quietly, and this red city is striding forward on the New Long March Road.

Toti: “Christmas in the white zone, a possible goal”

Berlusconi, words to honey for the grillini: M5S...

Conegliano, mother and son run over on the...