The 21-year-old net red fish pond was electrocuted and died: the family sued the power supply company for compensation of 1.21 million

According to Red Star News, on September 7, 2020, the Internet celebrity “Hongnan Wudaokou” with 6 million fans on a certain platform was accidentally electrocuted and died while fishing in a fish pond. His family members believed that there was power in the high-voltage power supply line above the fish pond. Accident safety hazards, the power supply company was sued in court, claiming more than 1.21 million yuan.

It is reported that “Hongnan Wudaokou”, whose real name is Duan Hongnan, was 21 years old at the time. Before the incident, he went fishing with his girlfriend Liu and others to shoot videos near the fish pond.

butAfter the accident, Liu and others did not notify Duan Hongnan’s mother, Ms. Cheng, but posted a video about the incident.only said that when I was holding the fishing rod, I felt electrocuted and went to take off my shoes. I didn’t see what Duan Hongnan did when he ran over. Later, I found that he fell into the fish pond and was not breathing when he pulled it up.

There is also a video that has been widely circulated on the Internet that Duan Hongnan threw a fishing rod on a high-voltage line by himself, causing an electric shock.

Ms. Cheng is divorced and single, with only one child, and was unable to rush to the scene immediately after the incident.

She believes that what Liu did was to use his son’s life to rub the heatAfter checking the monitoring, I also disagree with Liu’s statement, but because the monitoring is vague, it has been impossible to confirm what happened at that time.

See also  Intel vows to return to No. 1 in the world!On the second day, TSMC 2nm was officially approved-Intel, TSMC, 2nm-Fast Technology (Media under Drivehome)-Technology changes the future

Ms. Cheng said that in the past two years, on the one hand, she has suffered the pain of losing her son, on the other hand, she has also suffered from cyber violence, and she is exhausted physically and mentally.

Recently,Ms. Cheng and her ex-husband sued Changchun Power Supply Company of State Grid Jilin Provincial Electric Power Co., Ltd. to court on the grounds of “dispute over responsibility for personal injury caused by electric shock”. They demanded more than 710,000 yuan in compensation for death and 200,000 yuan in spiritual comfort, totaling more than 1.21 million yuan.

In this accident, Duan Hongnan did not intend to do so, and the accident did not involve force majeure. The defendant, as the manager of the high-voltage line, should bear full liability for compensation for Duan Hongnan’s death.

At present, the People’s Court of Chaoyang District, Changchun City has accepted the case. 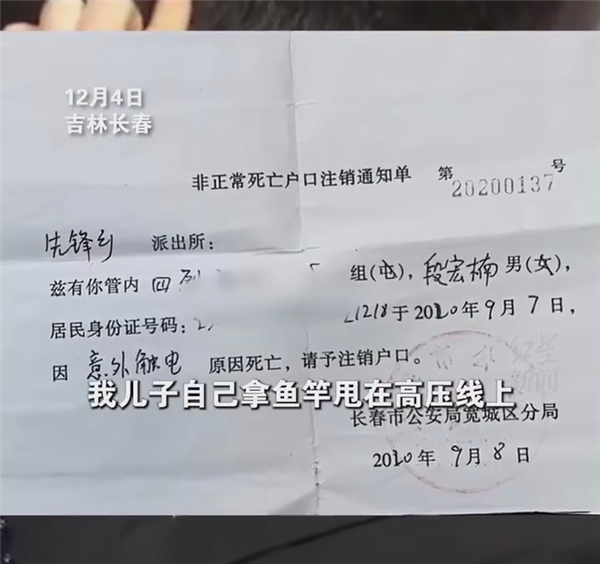 Loans: between Black Friday and Cyber ​​Monday requests at + 28%

Regé Jean Page would be the most beautiful...

“No one can negotiate peace”: Petro to false...

Roses of laughter through the air

Unitrópico will increase the number of admissions to...

The platforms tremble: The pact between the Mayor’s...

Cyclist died after being hit by a vehicle...